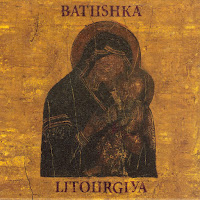 Band Members:
Disputed - due to current legal dispute there are currently two different versions of the band with both sides in an ongoing court battle.

An album that caught me completely off guard. I did the one thing I hate doing with albums, judged it by it's artwork and shoved it under the carpet thinking it would be that standard stereotypical occult type album, but I was very wrong. Once I revisited the album, I realised that Batushka had stumbled across something truly mesmerising. Building on the traditional black metal foundations, Batushka built a completely different, if not more Orthodox, house on those foundations. Litourgiya is the tensest Orthodox sermon you'll ever hear!

The main reason I gave it three horns out of five though, is because I can't understand the lyrics and there is no lyrics or translations anywhere to be found. Considering many of us aren't fluent in Eastern European Orthodox Liturgy this can deter people from listening as they won't be able to understand, let alone find, the messages in the music. However, this obvious creative choice does add to the mystery of the band and the music, and a healthy dose of mystery can never be a bad thing for the inquisitive music listener like myself. At the end of the day though, if I ever made it to Russia or Eastern Europe and had to travel across large distances this would be one of the albums I'd choose to soundtrack the journey. Imagery of isolated Orthodox churches in the middle of desolate, snow capped mountains just comes to mind every time I hear this album.

From start to finish, this album is loaded with atmosphere, and the way each song seems to bleed into the next makes Litourgiya incredibly easy to listen to, as there is no loss of relentless momentum between tracks. The tracks get more and more choral as the album goes on,  and it just raises the intensity of everything. Instrumentally, the guitars seem to take a step back, although the riffs are crushing and devastating as well as melodic, they aren't the focus of the song like most metal songs are. I was always drawn more to the drums and the phenomenal vocals (both lead and choral), this is why Litourgiya is unlike anything that I have come across before. Production wise, the album is very well mixed and mastered. I can imagine that trying to manage all those vocal tracks must have been a challenge, but everything has its place. The layers upon layers of texture encompass the whole sonic image, even through the less than ideal Apple laptop speaker you can still hear the enormity of the album.

Despite the current band member and various other (financial I think) controversies, I really hope that Batushka remains in the black metal sphere, as they only add to Poland's pedigree in this genre. Litourgiya is the product of a phenomenal creative vision and I hope there will be a follow up soon! In the mean time Litourgiya is heavily in my rotation!