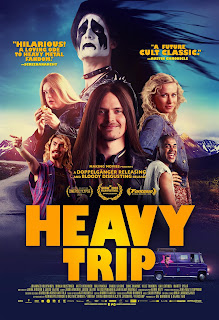 Summary (IMDb); Turo (25) is trying to overcome his fears by leading the most unknown heavy metal band in Finland, Impaled Rektum, to the hottest metal festival of Norway. The journey includes heavy metal, grave robbing, Viking heaven and an armed conflict between Finland and Norway.

Possibly one of the funniest metal films I have seen, the Finnish certainly have a great sense of humour and definitely nailed the metalhead tropes! It was awesome to watch a film in its native language, in this case Finnish (which I'm told is closer to Hungarian than Swedish/Norwegian linguistically, but don't quote me on it!). I felt I could understand the film more in a way, as someone who lives in small town South West, England the story had a particular resonance with me. That constant objective to break out the confines of a small place and make something of yourself, in the case of Heavy Trip it is four lads aiming to play an extreme metal festival in Norway!

There aren't many films that take on a heavy metal theme that aren't documentaries, let alone with the extreme side of metal, I can only name two that stand out alongside Heavy Trip; Deathgasm (2015), and Málmhaus (Metalhead) (2013). (I would also put Lords Of Chaos (2019) in the mix but given that it's based on real events it only half fits, as of yet I haven't seen it so I wouldn't 100% know.)

The storyline is pretty standard in the way it has a fairly stereotypical structure for the story arcs. For example, the romance arc involves socially awaked guy meeting girl, with the girl being pursued by the town sleaze but awkward guy ultimately wins the girl in the end etc. Although it does this, the film doesn't feel cheesy or tacky at any point for me, but a well crafted comedy with appropriate pieces of tension and drama. I felt fully hooked from minute one, and laughed regularly throughout, which I haven't had with a film for a long time. At the end of the day it's just refreshing to see how our European brothers and sisters rework the classic story arcs in Western culture into something contemporary and relatable, as I believe Laatio and everyone in the writing department have created a thoroughly entertaining film.

With this in mind, Heavy Trip for me brings in all the humour that most metalheads would get instantly, literally like looking into a mirror, and for anyone that isn't into metal I'd recommend this film as it pretty much outlines the daily life of a metalhead, including screaming your head off in your room/basement with your mum coming in halfway through saying that dinner is ready. While it does cover some more serious topics like; the angst of romance, the death of a friend, being stuck in a monotonous job and the general struggle of being accepted in a conservative small town it does so with humour. For someone like me, it makes the pay off at the end of the film worth it, as I can fully empathise with the characters in this film (even though one of them looks like a blonde, more muscular version of Mikael Åkerfeldt).

Overall, if you want a funny, easy to watch film about metal set in Finland, this is worth a watch! Maybe on a Sunday afternoon, with a jug of beer after a long week of raising hell. (If you don't mind reading subtitles).