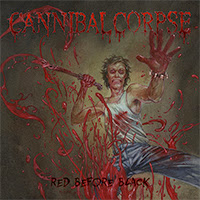 Review
Rating (out of 5 🤘): 🤘🤘🤘🤘
Favourite track(s); Code of the Slashers, Only One Will Die, Heads Shovelled Off

On the 16th March last year, which ended up being a very drunken night, I went to one of the most brutal gigs I had ever been to, Cannibal Corpse and The Black Dahlia Murder at Motion Bristol, just after this album had been released. Being torn a new one in the pit accompanied by the chaos that is Cannibal Corpse's music is a dream I definitely lived out that night. Having experienced some of these songs live, Red Before Black is Corpse at their crushing and brutal best, a riff a minute ride into the bludgeoning world of death metal, from crushing start to demolishing finish, this is essential Cannibal Corpse listening!

Production wise, there is a lot more weight behind the tracks, which builds on the foundations that predecessors Torture and A Skeletal Domain. Especially with the opening riff to the Code Of The Slashers, it just makes you want to screw up your face and move to the groove (a testament to the songwriting as well). As much as I love raw production, everything just seems clearer on this album when compared to previous Corpse albums. One thing I'll always praise George "Corpsegrinder" Fisher on is being a death metal vocalist that we can understand, but from my perspective, on this album his vocals are even clearer. The guitar and bass tones are heavy and gritty with optimal clarity, with weighty ten ton drums behind them it really is a chaotic, sonic assault on your ears. Overall, a solid mixing and mastering effort from Erik Rutan on this one!

Musically, the riffs are ten to the dozen, if you asked me to pick a favourite I don't think I'd be able to in all honesty. The technicality and ferocity of both Pat and Rob's playing is second to none, and there's little more to be said about Alex Webster's brilliance on bass (I still to this day have no idea how guys can play that aggressive and fast just using their fingers!). As can be expected from Corpse, it's a well rehearsed, professional performance. With Corpsegrinder's lyrical imagery nothing short of it's usually grizzly theme, if I ever ended up in a Saw like situation, I imagine that this album would be the soundtrack to my experience in one of Jigsaw's traps, one with a giant, rotating sawmill blade I expect. The whole album, is exactly what it says on the tin. Crushing and brutal death metal from one of the genre's pioneers. So, if you come here looking for the calming effects of whale sounds, I strongly advise you to still listen to it anyway, it has the same effect.

With this being Corpse's 14th album, they are definitely not showing any signs of slowing down! For me this album represents a milestone for Corpse, they're still at the top of their game after 31 years in the business and judging Corpsegrinder's interviews, they're still enjoying every bit of it. It definitely feels strange that it's been a year since I saw them in a very hot and sweaty warehouse on the outskirts of Bristol city centre. The gig itself was awesome, nothing too flashy, and the setting was perfect, just hope I can catch them live again some day before they call time on their illustrious career! 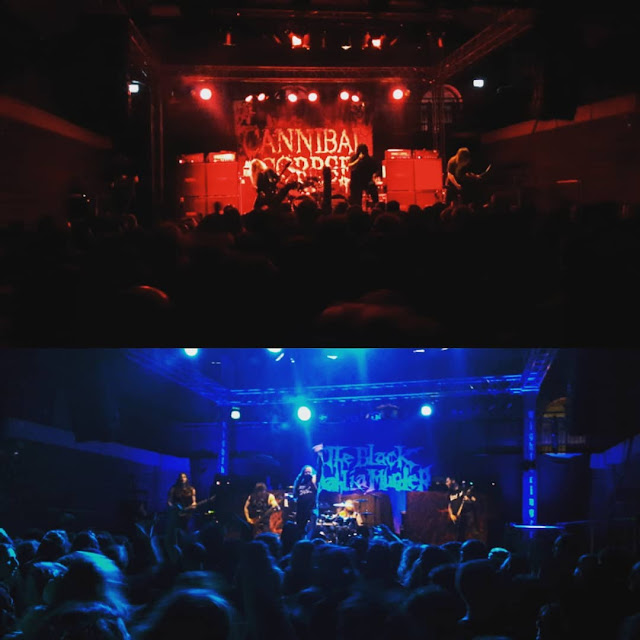 A photo from the Bristol show at The Marble Factory, absolutely phenomenal night!
​
Album Reviews