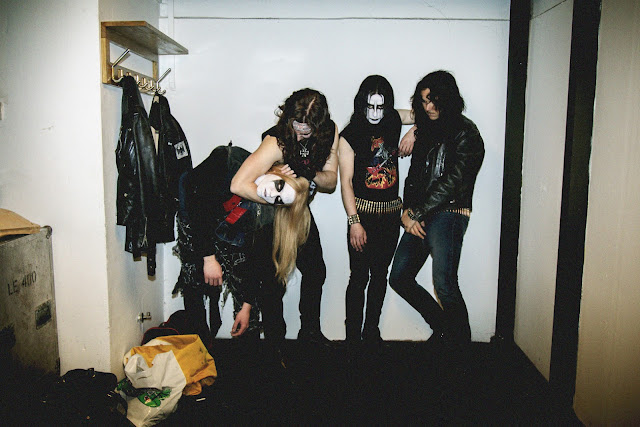 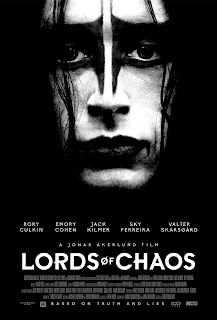 Synopsis (IMDb): Oslo, 1987. 17-year-old Euronymous is determined to escape his traditional upbringing and becomes fixated on creating 'true Norwegian black metal' with his band Mayhem. He mounts shocking publicity stunts to put the band's name on the map, but the lines between show and reality start to blur. Arson, violence and a vicious murder shock the nation that is under siege by these Lords of Chaos.

I will never claim to know all the ins and outs of the early Norwegian black metal scene as;

But having written an essay on black metal at university (which you can read following the link below, it is only 3000 words so it's a quick read so you can get the gist of where I'm coming from), I've done a lot of in depth research so it is fair to say I know as much as everyone else does. One thing I will say is that this film is down as a biopic but it is definitely more for entertainment purposes than being a true representation of Mayhem, Euronymous and the rest of the Norwegian black metal scene in the late 1980s and early 1990s. Given that the members of the scene universally refused their music being used (although Mayhem's did eventually feature in the film) and universally condemning the film as a whole, I went in with curiosity but kept my hopes down low.

I'll start off with the good things, you can tell the film had a decent budget as the cinematography was seamless and well edited. It isn't very often that we get Hollywood style films about extreme metal. The use of real life key locations as outside shots added some authenticity to the story, with the efforts to create a replicas of the churches specifically to burn them was a nice touch. The gory scenes were nothing short of stomach churning, especially when Varg's knife enters Euronymous's head and when Dead blows his brains out. I have to say that's about it really.

I'll be honest I really struggled with this film, don't get me wrong I enjoyed it as an entertainment spectacle and if I knew nothing about black metal, Mayhem or Burzum this film would be one of the most grizzly music based films I would have seen, but and that's a big but, there are definitely a few things that made the film seem just chaotic and unorganised, it feels like some details are missing  you know? With this in mind that this whole movement happened in Norway, so why American actors were used with no attempt at Norwegian accents is absolutely mind boggling. I also can't look past the fact that Rory Culkin looks so much like Macaulay that I think he's going to go Home Alone awol at any point in the film.

I know it tries its best to follow the chronological order of things, but everything just felt so fast and chaotic, and the fact that Fenriz of Darkthrone was barely featured is another thing that irritated me. As much as early Norwegian black metal is about the dispute between Varg and Euronymous there were other people involved that made the scene what it is and some of them barely have a line in this film. Not to mention the totally made up love interest for Euronymous. There are various parts which Varg has disputed as well, like "he was portrayed as a "power-hungry lunatic" in this movie, and that this is a deliberate misrepresentation based in part on the cultural misunderstanding of his passion for role-playing games in the 90's. Taking on fantastical personal titles and playing war-games with fictional factions on world atlases has become a normal part of culture now, but was noted as a suspicious form of power-fantasy by police investigators in the 1990's." (IMDb 2019) which we can take with a pinch of salt because it's Varg.

In the bigger picture of things, I think the film does cast metalhead's in a bad light. We all like to party but not everyone has the reckless abandon like these guys are portrayed to have. I think in that sense to an outsider to black metal it will reinforce the idea that we're all destructive, careless weirdos that burn churches. End of the day, this film is enjoyable for entertainment purposes only I think, as much as it is easy to watch and it's about extreme metal, we don't get these films very often especially Hollywood style. If you do want to know the true story about these bands I recommend watching Until The Light Takes Us, Once Upon A Time In Norway and Pure Fucking Mayhem. Whilst Åkerlund was a previous rehearsal drummer of Bathory, it feels like he holds the scene in contempt and I feel like this comes through in the film.

Overall, I liked it but I didn't love it and it fell short of what I expected. I will commend Åkerlund's effort as I don't think I could pull off anything like it. So if you fancy a grizzly music film, this is the one for you!