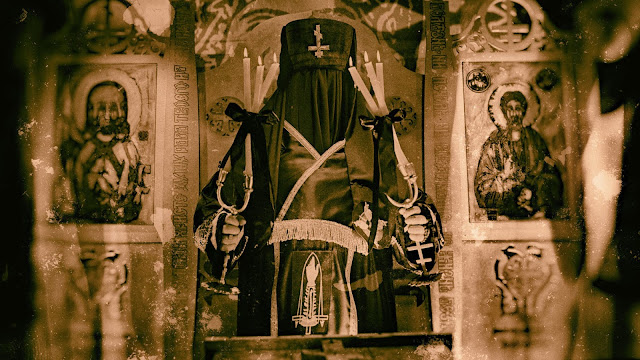 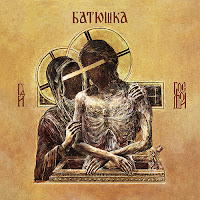 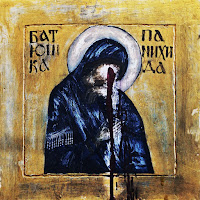 Band Members:
Disputed - due to current legal dispute there are currently two different versions of the band with both sides in an ongoing court battle.

Below is the video uploaded by Batushka creator Krzysztof Drabikowski concerning the two different versions of the band. To hopefully get rid of some of the confusion surrounding this whole situation, as I still don't really know what's going on myself, I'm just here for the music, but I do want Batushka to carry on as a single entity with it's original creator Krzysztof.

DISCLAIMER: Given that there are currently two versions of the band in existence, a lot of people have been calling the second version of the band "Faketushka".  I'm not here to discuss that side of the band's issues or cause controversy or drama as this is a subject that currently has a lot of heat, so I've used the names of the two main musicians involved to identify each side of the band to avoid adding any drama or creating controversy.

Песнь 1 carries on directly from 2015's Litourgiya seamlessly it definitely wouldn't sound out of place that's for sure, with its grand and haunting Russian/Eastern European Orthodox melodies and solemn guitar passages, this is what we expect to hear from a Batushka song. While it still has a very black metal feel overall, but it stretches more into doom territory with the slow speed of the main riff, which is similar to some sections that are very reminiscent of Litourgiya.

One thing that is interesting is the artwork, as it looks like a bastardised version of Litourgiya in comparison to the single artwork for Bartłomiej Krysiuk's Batushka. which has a lot more detail and could be considered as a departure  from Litourgiya, possibly metaphorically symbolising the split from Krzysztof Drabikowski's Batushka and the potential new musical direction. This is only speculation though. This does draw to the fact there are very sporadic harsh vocals on this single, which I found interesting as I was expecting them to come in for an extended period of time at some point during the song, but this doesn't happen until the last section of the track. Not to mention that one half is spelling the name with the Cyrillic script and the other chose English.

Musically, Krzysztof is good at is really building up a song in the first 30 seconds, with gentle hammered bells and then establishing the main riff and vocal melody early on. Песнь 1 is no different in this case, even though it has a lack of harsh vocals, the intricate, interweaving choral melodies more than make up for it in my opinion. It does sound very mournful overall, possibly alluding to the fact that the band has been "stolen" from him. Песнь 1 translates as Song 1, maybe the fact that it doesn't really have a title suggests this as well. It's a very cryptic song, and if I could understand the Old Russian Orthodox language I'm sure there is a few metaphors in there about the whole situation Krzysztof. Again, this is all speculation but you can feel some animosity between both sides.

From a production standpoint, I love how well it's been done, it just sounds huge. If you turned round and said to me it was recorded in a Russian church then I would actually believe you because of the way the chanting sounds. Everything is super spaced out and has its own place in the mix, which is often against the grain with traditional black metal mixing as everything is much closer in so the onslaught of sound hits you directly. The guitars and drums work in unison to really support the vocal melodies and I think the tones Krzysztof really compliment the songwriting by giving the riffs a subtle harshness that still fits the black metal mould.

Overall, I really like this single as it does feel like it's been reborn from the ashes of Litourgiya, and takes on a life of its own with all the controversy going on in the background.

This is an interesting one, considering that Krysiuk has effectively left the video intro in the song, which adds some unnecessary seconds on to it I think. Personally I'd have just opened up with the funeral singing depicted in the video and then launched into the song, but that's just me. Despite this, it sounds and looks like Batushka but is fundamentally different artistically at its core. Whilst it does follow the blueprints that were drawn up by Krzysztof in Litourgiya, but with some very minor changes that are quite noticeable.

Musically, it doesn't seem to carry a melody like Песнь 1 it's just straight into the blast beats and black metal tremolo chords and riffing, which isn't a bad thing but it's not what we consider Batushka to be. the only glimpses of melody that you experience is in the beginning of the song and a few transition sections found between verses and the ending. There is also a lack of depth to the choral parts, and it seems to have a few passages that sound similar to Песнь 1, possibly Krysiuk reworked the melody, it can only be speculated. Like I say though, there is not really any musical, atmospheric build up that I would usually associate with Batushka because of Litourgiya. Although I do like the a capella singing at the beginning it would have been nice to hear it carried on a bit longer until the clean melody comes in. The things I do enjoy about it though is the ruthlessness of the riffs, they just smack you in the face and hectic. The harsh vocals and choral sections still sound ritualistic, cryptic and mystical, probably because I can't understand Russian Orthodox liturgy.

Production wise, it seems a bit more closed in compared to Песнь 1, it lacks that Batushka sound and to my ears almost sounds like a completely different band but I know it's one version of Batushka because of the Orthodox chant sections. That doesn't mean the mix isn't incredible because it is. I can imagine the challenges the producer must face balancing out the bass and kick alongside predominately male bass voices and getting them all to sit together without interfering with one another. It still uses reverb in a cavernous manner, i.e. it sounds massive, especially with the guitar tones.

Overall, it's still recognisably Batushka just a side that we've not seen before. I've got mixed opinions about this single but I still really enjoy it. It's a great track but for me Песнь 1 just pips it to the post, in terms of what it is and where it's coming from musically and artistically.

This was a really hard review for me to write, mainly because of the Polish but having to contend with two sides of the same band is not something that I've had to deal with before, so I've done the best I can. Batushka is a very special band and I hope all the conflicts and legalities get fully resolved so that Krzysztof and Bartłomiej can move on properly and achieve their creative goals.
Single Reviews