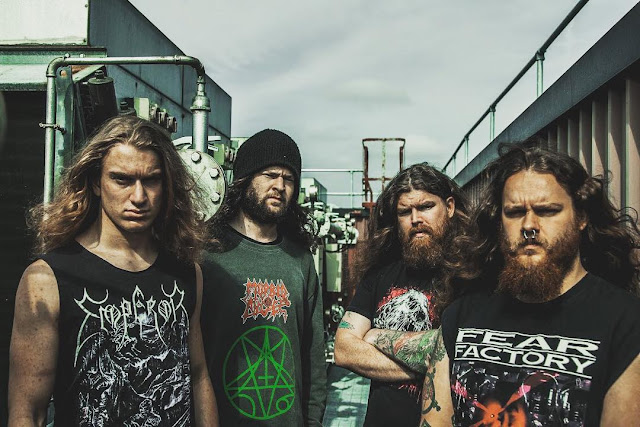 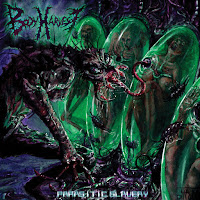 Review
Rating (out of 5🤘): 🤘🤘🤘🤘🤘
Favourite Track(s): Hierarchy Of Grief, Parasitic Slavery, Consumed By Tyrants, The Prophet

I remember seeing these guys live, in the tiny upstairs room at the infamous Gryphon in Bristol, I think it was 2017's Gryphest and it was one of the most brutal performances I have ever seen. Relentless from start to finish. I remember it also because I had my kidneys smashed into the bar during the pit, but by my logic it's not a gig unless I've been battered about to some extent, I digress. Anyway, I've been waiting for this album for a long time, ever since I heard 2016's Futile Creation (which is equally hectic and brutal). Hierarchy Of Grief, was released as the first single and I was all aboard the hype train. Now I've heard Parasitic Slavery in it's entirety, and I've just picked my brain up off the floor after my skull has been so brutally crushed by the riffage. I can definitively say that this is a masterclass of death metal from some of Bristol's finest!

Musically, it's everything you want a brutal death metal album, it's fast, raw, full of riffs, accompanied by blast beats that will blow out your brain and growls that will unleash any inner beast you might have. One thing I loved about seeing Body Harvest live was how they kept up the relentless pace of their album on stage, to be honest they make it look effortless. Parasitic Slavery is an excellent blend of grind and death metal elements, the break neck speed of grind but the technical preciseness of death metal. Which from my perspective is hard to pull off because usually bands will venture further into one more than the other, and focus on some songwriting properties more than others, but Parasitic Slavery has an equal measure of both amongst all it's other influences. For example, in my opinion, Consumed By Tyrants definitely reminds me of some old school Cannibal Corpse with hints of Napalm Death. Hierarchy Of Grief definitely has something very Dying Fetus like about it, mainly the Stop At Nothing era. Overall, every song channels something brutal and savage into it, yet has it's own unique feel, which is refreshing as many death metal albums these days can sound very similar from one track to the next but on this album every track stands on its own two feet.

I think the mix of the album makes it stand out from other death metal albums I've heard recently as it's quite a clean and professional sounding album. I love everything from the way the drums sound right down to the vocals, its a very well put together from a production stand point for me. The layered vocals particular stand out to me, as it's something I've only really heard in deathcore for certain sections, where as Parasitic Slavery layers them for longer passages and really does add depth to the overall sound as they're panned left and right so it feels like they're coming at you from all angles. There is a lot of control over the low end, which makes everything sound super tight as there is no stray bass waves making the mix muddy or sound like it's going through one of those 1920s cone recording things. Just phenomenal production all round.

This is definitely an album and band I would consider checking out if you haven't heard them!  Every devastating and crushing death growl will fill your black death metal loving heart with joy. Definitely a band putting the Bristol metal scene on the map and I can only imagine that this album can only lead to bigger and better things for Body Harvest, awesome album lads!