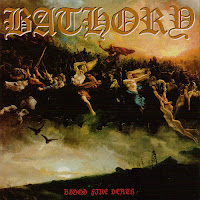 Bathory - A Fine Day To Die

Review
Rating (out of 5💀): 💀💀💀💀💀
Favourite Track(s): A Fine Day To Die, Dies Irae, Holocaust, The Golden Walls Of Heaven

One of Sweden's most famous musical exports, a founding member of the first wave of black metal alongside Venom and Celtic Frost as the bands first credited with the black metal sound. Bathory is known worldwide in the metal community, a lasting legacy that still inspires to this day. Blood Fire Death would contain within it Bathory's most famous song, A Fine Day To Die, which is raw, dark and beautiful. The album is also considered to be one of the first example of Viking metal, due to its lyrical themes and was the start of the next Trilogy of albums by Quorthon.

"Listening to “Oden’s Ride over Nordland” at 1 AM in a dark room evokes something majestic, and considering these dark times, one can almost feel bathed in otherworldly presence crying out from Valhalla foretelling of Ragnorak, or maybe at least consider the idea sounds appropriate" (Pendergast, 2018)

As this album would go on to influence the Norwegian wave of black metal, it's key to understand that Bathory has been a project since 1983, and extreme metal was in its infancy. The vocal style immediately stands out and instantly recognisable as synonymous vocal style of black metal;

"When you listen to a black-metal record and you hear the vocalist shrieking like his vocal cords are being jabbed with rusty razorblades, you can credit Bathory's late frontman Quorthon as the inspiration. Primarily a vehicle for the Swedish multi-instrumentalist, Bathory, along with Venom, is probably the most often cited musical influence by groups in the black-metal universe." (Ramirez, 2009)

Many seemed to believe that Quorthon was influenced by Slayer and Venom, however in a 2002 interview he stated; "I think it is very easy for people to be making that kind of connotation, simply because those two acts in particular are perhaps among the first ones that comes to mind when the roots of extreme metal is being discussed. But actually, I have never owned a Venom or Slayer album. And I don’t give a fuck if people believe that or not." (Quorthon, 2002). This for me makes the album more remarkable, as it's this jumble of raw aggression, creative songwriting and all round musical innovation. As most of his guides to metal were bands that were part of the first wave of British heavy metal like Black Sabbath, and Motörhead. There is something so profound with this album, I remember listening to it for the first time while writing my essay in a library. I had a musical epiphany there and then. I couldn't stop listening to it, and knowing this is all the genius of Quorthon, bar Motörhead, there is no real extreme metal influence behind it, so that alone makes it revolutionary.

As far as black metal goes this album appears to have very little atmospheric touch. That would be where you are wrong. As much as this album is straight up raw and crushing evil, the first two tracks  Oden Ride Over Nordland and A Fine Day To Die really set the tone of the whole album.  Oden Ride Over Nordland packs everything that would become synonymous with the quintessential black metal style and song introduction; battle effects, cries of horror and fear and possible flames over a haunting acoustic guitar melody.  Before it drifts into A Fine Day To Die and just when you think you've got it, boom, a massive wall of distortion and ferocious power hits you. Musically the rest of the album tends to have a more thrash metal vibe, as it's relentlessly fast and shred laden.

"The guitar work is also something that should be highly praised. While most of the riffs are basic and straightforward (which is why I thought this felt like Thrash-Black Metal), the soloing is superb. One only has to listen to the soaring solos on A Fine Day to Die to be captivated by them. The Golden Walls of Heaven even features some classic whammy-bar dive bombing before Quorthon begins his shred fest. And that’s another thing: the solos aren’t melodic at all. They are balls-to-the-wall chaotic, and they don’t ever slow down. Even on the title track (which is slightly slower than most of the songs present), Quorthon never lets up his shredding duties."

Musically, this album stands out for its time, I think even if it was released today it would be hailed as an instant classic. The rawness of the production really digs its claws in and infects you with its power. The significance of this album for me is the fact it was my first real encounter with black metal. I'd obviously heard snippets of Mayhem, Burzum and the like on things but this was the first black metal album I sat through and properly delved into. Which I think is quite fitting, as I also listened to Venom and Celtic Frost. I started my black metal journey with its originators. I'd be lying if I said it didn't have an impact on my songwriting, for ages I had my style of playing but it would never fit in with what I was listening to until I heard Blood Fire Death and a lot of what I was creating made sense. I think I could see a lot of myself in Quorthon as well, he was his own man, and created his music on that basis and didn't care about the opinions of others. There's always more edge to music when you know the person has put all of themselves into it and from my perception I feel like Quorthon did just that with Blood Fire Death.

Overall, this is still and will probably remain an inspirational, influential and legendary black metal album. Some can argue that it's probably the best black metal album. A lot of modern day black metal's characteristics, themes and songwriting can be credited to Bathory, with the three albums before Blood Fire Death, Bathory was recreating the sound and face of extreme metal. This album is in constant rotation and when I need to remember what got the Vanaheimr project started and why I do what I do, I listen to Bathory. So when someone asks me what black metal is, I hand them a copy of Blood Fire Death.