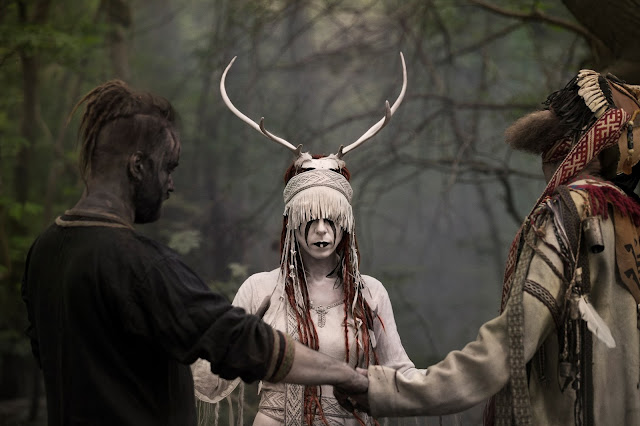 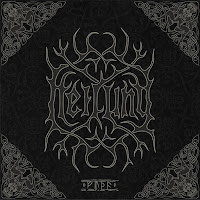 From the very start this is a very beautiful and equally mystical, haunting and spiritual album. You feel connected with the gods of old and the album stirs up an unbelievable urge in me to reconnect with nature and the environment around me. Drawing on a multitude of historical and cultural influences this album lives up to the bands 'Amplified History' ideology. With Heilung meaning healing this album definitely relaxes your spirits and helps you shut off from the real world for a few moments. Using a Proto-Germanic/Norse language is something I'm not stranger to hearing but the way Heilung have used it here gives me a spine tingling sensation, like I'm in the land in which the album is set, like a character in a saga.

Musically, it works with a  lot of droning elements as well as traditional sounding instruments. The vocals and story telling in the lyrics are the key focuses of the songs. While it may not sound as epic and grand compared to the likes of Wardruna, but it still has the same effect on you spiritually. The music is a lot more shamanic and ritualistic in its nature, to encourage spiritual healing. The majority of the songs are slow builders, it'll take a couple of minutes to establish the scene for each song, except Norupo, which seems to get going quite quickly. The instrumentation that gets used covers wide variety of cultural influences, in a 2018 interview the band stated that instruments used in Heilung's music consist of;

These various instruments really give depth and uniqueness to their music, to create the dynamic atmospheres in their music. Vocally, female vocals of Franz are ethereal, while Faust's throat singing recalls the Tibetan or Mongolian style. Juul uses a chirping whisper as vocals. With all things considered its very hard to describe the music in a layman's terms because it's so deeply complex.  I think the best demonstrations of this multi-faceted songwriting is in Galgaldr and Hamrer Hippyer. Overall, I always get inspired by this sort of thing as I would love to try making something like this myself.

The album is also mixed really well, which I think helps when it comes to establishing the songs atmosphere and detailing the sonic space. Consisting mainly of a lot of reverb and panning effects on the vocals to create an ethereal space, as many of the percussion instruments only feature prominently in some songs, so the vocals carry most of the songs, it was essential to get that right which they have done. This is best demonstrated towards the end of Hamrer Hippyer where there is some deep singing  drenched in reverb but it sounds epic.

One reason it's not a five out of five for me is that when there was some of the more narrational type songs, some of them seemed to drone on a bit halfway through the album. I get that it's meant to be a story telling album but compared to 2015's Ofnir it felt a bit dragged out in sections where as Ofnir had a continuous rhythmic undercurrent to guide the narrations. This is mainly my personal opinion and I can understand that the band may have wanted to get more of the stories across than the music.

Overall, it's a great album. I love the fact that bands like Heilung exist to bring history alive in this unique and very real way. Exploring historical and spiritual concepts through music is a great way to get more people engaged with their past and heritage. If you haven't checked out Heilung, Futha is a good place to start!