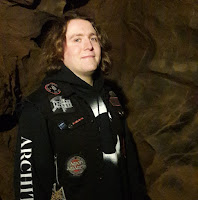 A Short but Elaborate Introduction

Now that Fjordhammer has got a decent following, I thought it'd be a good idea in my infinite wisdom (which is not very infinite) to give you an insight as to what goes on in this wandering mind of mine. Various thoughts and perspectives on various subjects within music and just generally what the hell I'm doing. As you can tell already this is going to be the more informal section of the blog where I write exactly what my mind is processing at the very moment I write a post. I'll still be doing Vanaheimr/Fjordhammer updates focused mainly on just that, so don't think that this will replace that, no no, this is literally the wanton ideas and ramblings of a very mad musician! As you can see in the photo I've selected I'm very often away with the Fairies (or should that be spelt Faeries?  I digress) and often look like a bit of a dork but it's something I take pride in. My imagination is very vivid so it makes it very easy to just stumble off (because I'm clumsy) into a random corner of my mind never to be seen again! To be fair, the photo was taken in Cheddar Gorge in Gough's Cave and the more serious ones made it as Vanaheimr promo shots and I do look quite cheerful in this one.

I will be dividing it into sections (mainly to make it easier for you to read and for me to organise) similar to this format:

I. Intro
II. What I'm Listening To At This Very Moment
III. What I've Been Jamming To This Week
IV. Things I've Found Interesting
V. Guitar/Gear/Production Stuff I Like
VI. Conclusion

So we've had the intro technically, so let's crack on!


A classic from Black Sabbath. Sabbath alongside Led Zeppelin and Jimi Hendrix started my journey into the heavy metal world, so I'll always have a soft spot for that 70s metal/rock sound. If anything, I think its seeped, rather heavily, into my musical soul.

This ties in with the last one, I've been putting together a playlist of Black Sabbath-esque, doom riffing, bass thundering, fuzz monster bands for the summer (linked below). I have what seems to be a seasonal music taste, which is weird as I've sort of grown into it. While I listen to a lot of music over the year I tend to prioritise certain genres more than others at different times of the year. So, it's June now so summer is here-ish (its the UK its fucking raining unsurprisingly) so I tend to shift to more bluesy, 70s era music, hence Sabbath. In Autumn it's more Type O Negative, winter I'll go all Trve Kvlt, yeah you get the drift. Anyway, it is very inspiring to me all this Sabbath sounding stuff, because my whole guitar playing style is based on it essentially. I've called it Riffing It Down To The Devil's Sound because for me some of the most satanic sounding, ritual starting, mystic riffs have been heard in these songs. This seems to be the metal sub-genre that our metal sisters THRIVE! So many powerful women in these bands I absolutely love it and I want more! (in fact I correct myself, all our women in metal are thriving, keep fucking going ladies!!!). I can never tell where my riff writing sessions take me but there is definitely room in there to write songs like this.

I've just finished reading by fourth book of the year, Knight: The Medieval Warriors (Unofficial) Manual. I've read a similar one that was Viking themed too. It was a great little read, outlining the basics of Chivalry and how easy it is to break those rules, the disadvantages to fighting on horseback and how women can send you on outlandish deeds of glory for you to prove your love to her (which actually means she wants to get rid of an undesirable suitor, which is genius!).

I saw an article where a writer raised £3,000 through a successful crowdfunding campaign to create a book on Old Shuck, the black demon dog of East Anglia that supposedly terrorised church goers in 1577. I know the legend has been immortalised by flamboyant band The Darkness on 2003's Permission To Land. As it is a graphic novel author Mark Allard-Will "said the hardest part of writing the book was making sure his research into clothing, housing, technology and settlement types of both the Dark Ages and Tudor era was as accurate as possible." (BBC News, 2019). I think it is great that English folklore is being kept alive through mediums that will interest the younger generations.

Apparently there was a study conducted by AutoExpress (A car magazine in the UK) stating that listing to metal while driving is a bad idea. The study was run to see which type of music effects your driving the most. Personally I think the music you have on in the car is your personal preference already making this study inaccurate because it is subjective. I also have multiple questions about this study, one being "why have you labeled Slipknot as thrash metal?". While agree that volume can be a massive distraction and should be controlled you can't say metal makes you a shit driver when you don't actively listen to it. You can check out some of what they said here;
https://metalinjection.net/latest-news/metal-science/new-study-advises-against-listening-to-heavy-metal-while-driving

Some of you may know that I'm a big fan of The Feared and The Haunted guitarist Ola Englund, ever since he started Solar guitars I've always wanted one but can only dream of affording one. Usually with extend range guitars I'd just go straight for the 8 string (something my mind has about getting everything with even numbers) but the Solar S1.7PB is actually beautiful. I've seen a few of them being played live and they've always sounded good so I think that's a testament to Ola's design and eye for detail for the guitar player wants. Could you imagine the doom riffs I could get out of this thing?

So, this is the first of The Miscellaneous Goings On Of Tom and its a bit rough round the edges but I'll work out nice titles and make it look pretty later down the line, this is just to demonstrate the format of how I'm going to do these posts. I hope you've liked, as you can tell I think too quickly for my own good and often ramble so I've made an effort to keep it short! As always thank you for all the support, keep rockin' 🤘🖤