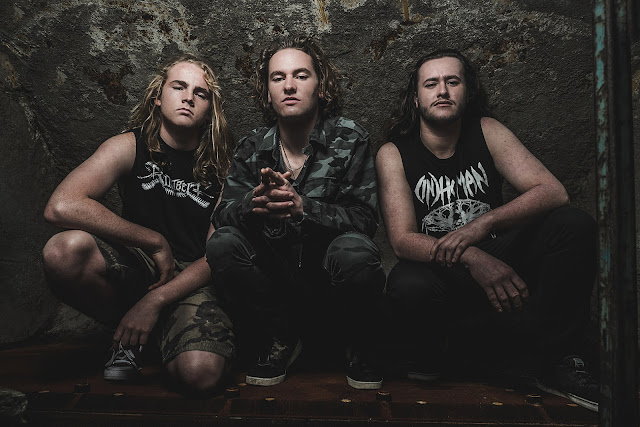 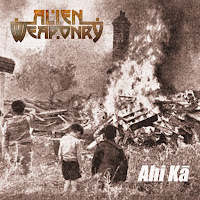 Alien Weaponry is unlike anything I have heard before, and it has left a lasting impact on me almost instantly! With the Haka war dance etched into my mind as a long time rugby fan watching the All Blacks conquer the world, hearing the Māori language in a metal song brings a whole new level of fear to the image I have in my mind. It works so well for with what Alien Weaponry are doing and it makes them stand out significantly from the rest of the modern metal scene. I love it when bands embrace the culture of where they're from into their music and this for me is a pinnacle of the ancient world meeting the metal world.

Musically, Ahi Kā has a very grungy and very raw feel. The ominous intro riff accompanied by a pipe of some description really sets up the dark atmosphere that the lyrics put across. There is a very groove centric approach to the song which definitely gets your head moving along to the beat. The discordance and chaos held in the riff holds so much aggression that you will want to get up and pump your chest like an ancient warrior when the lyrics kick in. Some parts remind me of some of the more technical metalcore metal bands like Northlane and Architects with a sprinkle of Lamb Of God because of the heavy discordant grooves. There is also a great use of dynamics, with slow builds and quieter sections contrasting the powerful and full sounding choruses. Overall its a well written song musically and lyrically. The meaning behind the lyrics are dark and sadly a fading piece of history that echoes that of the removal of Native Americans from their lands in America. The meaning behind the song is stated on their bandcamp page and is as follows;

"The song Ahi Kā is about a set of events that relate to Ngāti Whātua o Ōrākei (the tribe living in Auckland when Europeans settled the area). Although a very recent chapter in New Zealand history, the story is part of the unspoken history of New Zealand and is not widely known.

Around the time the Treaty of Waitangi was signed in 1840, the Ngāti Whātua chief Te Kawau sold 3,000 acres of land to Governor Hobson, on the expectation that Auckland would become the seat of the colonial government. When parliament was moved to Wellington a few years later, he refused to sell any more land, but land acquisition continued through confiscation and similar legislation.
The land overlooking and including the site of the village – called Takaparawhā or Bastion Point – was annexed by the colonial government in 1886 as a defence post; but in 1941, when the Crown decided it was no longer needed for that purpose, instead of returning it to its owners, it was ‘gifted’ to Auckland City Council as a reserve.  In 1953 it was announced that the Queen of England (Elizabeth II) was coming to New Zealand. This was the first time a reigning monarch had visited our shores; and the country was sent into a patriotic frenzy.  The Auckland City Council embarked upon a ‘beautification’ program in preparation for the royal visit. Unfortunately for the local Māori people of Auckland (Ngāti Whātua), they decided that the native village of the Ngāti Whātua at Okahu Bay, was ‘unsightly’; and it should be burned to the ground so the Queen would not need to look upon it as her motorcade travelled around the waterfront. As a result of the Auckland council’s decision, a work party was dispatched and Ngāti Whātua were evicted from their homes and forced to stand by as they watched their village burn. The dispossessed families were moved into State housing nearby, where they were required to pay rent. This crippled the once thriving community, forcing the younger generations into a life of poverty and servitude and making it difficult for many to care for and support their elders and community leaders that had been possible when they lived on their own lands. " (Alien Weaponry, 2019)

From a production stand point it reminds me of some of the more modern production styles but also of that 80s thrash style of mixing so there's a bit of grit and edge in there. The bass and drums carry some significant weight and hold down a solid foundation for the guitar high ends. I love the effects on the intro riff, its like some sort of overdriven, chorus/flange like delay that's pretty awesome. The crunchy guitar tone is something that I try to achieve when I write my own groove type riffs, but I don't think I could have pulled it off as well as this though. The sample of Queen Elisabeth II in 1953 caught me off guard a little bit as I didn't initially know why it was there, but then looking up the meaning of the lyrics it made sense. The grainy horns from the clip being left in is quite symbolic really as it shows that for all the British pomp we essentially did fuck up a lot of shit for other cultures and I like the fact Alien Weaponry have kind of mocked us in this way.

This is a very exciting band for me and I'm so glad I've finally had a proper listen to them, they are smashing it out the park and bringing teaching the world the awesomeness of the Māori culture through the language and imagery they put in their music. If you haven't checked them out, do it now!