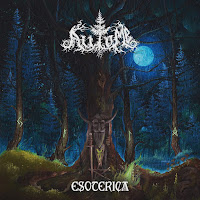 
Review
Rating (out of 5🤘): 🤘🤘🤘🤘
Favourite Track(s): Horned God, Mourned, Call Of Hekate, The Forest, Into Nothingness

Another crushing black metal album from the USA that sees all that is esoteric and mystical summoned from the darkness and moulded into a spellbinding album! I knew when I first saw the logo and artwork for Automb I knew they'd be awesome, I hadn't heard a single song at that point but you know when you get the gut instinct, I got it with Automb and they did not disappoint. It's raw, dark and beastly, which can only be a good thing when it comes to black metal. This is a metal extravaganza drawing on influences from all over the world, boiled up in a massive cauldron with incarnations cast all around to create this mystic beast!

Musically, it is wrought with nuclear blast beats and grinding riffs a raw and bludgeoning onslaught of black metal might. The riffs fit the traditional mould but also seem quite progressive and melodic, with an added groove for good measure. The album mostly reminds me of bands like Immortal, Panzerfaust, Void Ritual and Darkened Nocturn Slaughtercult. There is a particular reliance on the the 6/8 waltz feel of traditional black metal throughout the album, which I think has been lost in some modern black metal so it's great to hear it so heavily used in this album. Especially in Frozen, it has that really old school vibe. The dark atmospheres that integrate themselves throughout the whole album definitely make you feel like you need to summon some mystical darkness to mosh with you through this album. Danielle Evans vocals are also phenomenal, with the low death metal style growls really gives the songs their balls and sounding like a hell hound barking and snarling in my ear. There is also a bit of a hardcore feel in some of the more breakdown type sections in some of the songs which offers a great contrast to the traditional black metal elements.

The production I think leans towards the more death metal clean style than the black metal rawness. With that in mind though is doesn't detract from the grit that the album has. I think that the grit we hear mainly relies on the guitar tones which sound chunky and heavy as hell. The bass tone reinforces it and fills the gaps when the guitars go into the high end frequencies in a really grungy and distorted way. The drums sound super tight, that could be a stellar compression job or just the high recording quality, either way the machine of a man behind them, Scott Fuller, makes drumming like this sound easy! Speaking of drums, I love the way the crashes and other cymbals cut through the mix, they cut through just the right amount in my mind. This is because the lower recording quality of black metal loses them in the tape hiss. Overall, the album has a very compact yet brutal mix which compliments the onslaught of riffs the songwriting has provided.

This is a hidden gem in all the releases from last year and is definitely an album worth checking out! Automb have a bright future ahead of them and I'm looking forward to their future releases. Listen to Esoterica now.