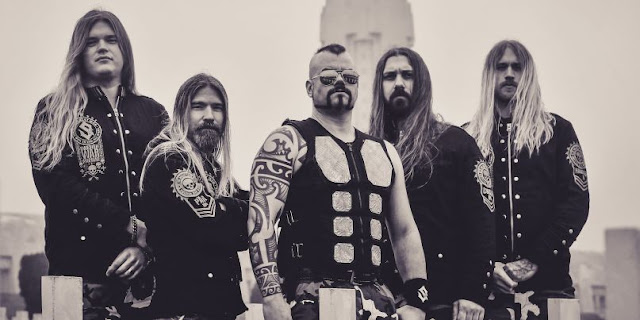 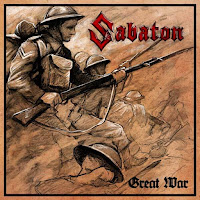 The mighty Sabaton take us back to the fields of the Somme, Ypres, Passchendaele and across the Western and Eastern fronts revealing the terror, horror and delusions of propoganda greatness with new single Great War! I knew it'd be a matter of time before my favourite musical history nerds made an appearance on the Fjordhammer blog but this song is too damn good to not share with you! In truth I'm a fairly new Sabaton fan, only really getting to know the band after I saw them live in Bristol a few years back. The music is epic and anyone who knows me knows I love my history, so when the two collide and present me with Sabaton I couldn't not fall in love.

The subject matter is very close to my heart in this one, with my great-great-grandfather having died in Gallipoli, Turkey during the Great War, the lyrics in the pre-chorus have a special resonance;

"Where is this greatness I've been told?
This is the lies that we been sold
Is this a worthy sacrifice?"

It also puts me in the shoes of the guys my age on both sides back then, and the inner turmoil they must have had when they found out that this war thing isn't exactly what it was cracked up to be. Considering that we are century removed from such a devastating global conflict it astounding how much we still don't know about it. As more things get revealed to us it is important that we take heed and prevent it happening again.

Musically, it is that epic and glorious Sabaton sound. Layers of chorals and keyboards accompanied by thunderous riffs. I think what I like the most about Sabaton is their attention to melody. Considering one of my favourite albums is the Swedish version of Carolus Rex, which is packed full of them and sound amazing in Swedish. Joakim's vocals are raw and powerful but they can certainly deliver the catchy melodies that the band writes. The chorus has been etched in my mind ever since I first heard the song. It's one thing that Sabaton are consistently good at is writing epic and powerful songs and this is no different, I think it mainly comes from the harmonic and rhythmic sections of the song, it just lays this immovable foundation for the melodies to sit on top of and sound awesome. I think the marching/galloping style rhythms really reinforce the message of the song. The contrast between the verses and choruses for me symbolise the tragedy and confusion the soldiers faced and then just getting up and getting on with the job in hand. That fearlessness of the soldiers, for me is truly honoured in this song.

From a production standpoint, Sabaton's songs sound great in the studio but even better live. I think this one has the potential to be a stadium mover! With power metal you can expect a certain mixing template with such a high recording quality otherwise the "power" elements and arrangements don't really come across that well. As you can expect this is an extremely professional and high quality mix, its nice for me to relish in something this well produced now and again as I would love to create something like it myself at some point.

Overall, this is a phenomenal song and I think all the WW1 soldiers would have approved of their history being shared in this manner. Sabaton will always be an epic band and hopefully I get to see them live again soon! Check out Great War now!

If you're interested in history and the meanings behind Sabaton's songs, check out their history channel on YouTube!