The Miscellaneous Goings On Of Tom - Heatwave Edition 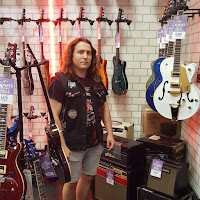 Bugger Me Its been Hot!

With it being a quiet second half of the month for album releases, I'm took this as time off from the blog. This is partially due to me being a moaning British person who lives in buildings insulated for winter that sap the life and soul out of your existence thus severely prohibiting my ability to work on anything and instead siesta away the hot, sticky and sweaty afternoons. As you can tell I'm a winter baby by birth and a winter baby in my entire existence so its love hate with heat and me. It's been a busy couple of months for albums though and we've had some solid releases that I've really enjoyed, mainly Sabaton's The Great War in all its power metal cheese and glory. I think the heat has changed my music taste slightly for the summer for more slower, melodic style music, mainly doom and sludge, for some reason my pussy ass can't handle blast beast and heat for some reason. My sympathy goes to all my long haired, black jean, battle jacket wearing metal compadres as weather in the UK is pushing the mid-30s. Makes me question is this a natural occurrence or is this the result of those bastard fossil fuel companies polluting and burning the fuck out of our clean air thus raising the temperature of the Earth? Either way, can someone freeze me until October?

Does this need any explanation? Its the brand new banger from Slipknot and this easily one of my most anticipated albums of 2019. I'm hoping I can finally see them live on their 2020 tour but I imagine tickets will cost an arm and a leg and sell out in a matter of seconds so most of us don't get a look in. You snooze, you loose though, so I can't complain at that especially with a band of Slipknot's calibre.

Unsurprisingly not much, as I've been sleeping or working. What I have been listening to has been a mish mash of blues, doom, sludge, power metal, southern rock and psychedelic prog rock mainly the latter. I've also been listing to a lot of the old classics, Hendrix, Zeppelin and Sabbath too, definitely feeling that 70s vibes. Chuck them all together with some synths and you get Ozric Tentacles. I do love to sit back and chill out to Ozric Tentacles when it gets like this, you can listen to it in any weather and it'll just transport you to some weird place in the corner of your mind where whales run libraries and dogs walk humans. I'm all about kicking back in the summer thats for sure.

Its Not Much But Its Honest Work

So yeah only a short post from me today which can be refreshing I suppose, I've just not been up to much the past few week, if it hasn't involved work, sleep, running around doing the influx of errands I've had to do or sweating my balls off then I haven't done it! I've spotted a couple of new releases that I'm interested in giving you guys my thoughts on and I'll be looking to give you a Fjordhammer / Vanaheimr update fairly soon also. In the meantime, hang tight and keep spinning the new Slipknot!


The Miscellaneous Goings On Of Tom