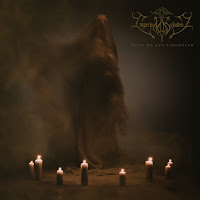 German bringers of doom and sorrow Imperium Dekadenz are back with a beautifully melancholic and sombre album. Harnessing all the powers of thought and transcendence, When We Are Forgotten is a journey through reflection and the curse of wisdom in the medium of crushing black metal. A slightly more restrained yet experimental album compared to 2016 predecessor Dis Manibvs in my opinion, it is a strangely therapeutic listen that is sure to captivate and intrigue it's listeners.

Musically, it leans more towards the atmospheric side of black metal than traditional black metal overall, but there are also some really good raw and powerful stereotypical black metal elements in there. The album as a whole has a really good flow to it, the variation between sections in the songs make it seem like they are all blending into one another like a finely ground coffee. A strange description for a metal album I know, but musically it is a strong and robust album with subtleties and complexities to its flavour. The interlude tracks Trauma, Seance and Reverie are nice break points and really help build the tension and atmosphere in the album by effectively breaking it down into three sections without hindering the flow that develops through each of the songs. I reminded a lot of bands like Emperor, Alcest and Sargeist when I listen to Imperium Dekadenz as they seem to really know how to construct and assemble the atmospheric black metal sound alongside the noise cacophony that is raw black metal. I think out of all the songs Transcendence really caught me off guard, it's happy and melodic intro riff in contrast to the rest of the album is really strange. Initially you feel like the song shouldn't belong there but the more you listen to it the more you know it should be. It adds this air of hope in an otherwise melancholic and dark album, which is a unique twist that I certainly haven't seen in any black metal releases. Both My Solace I & II, resonate the biggest with me on this album as I feel they really capture the Imperium Dekadenz sound whilst having this subtle German style Behemoth element that takes me back to 2014's The Satanist. Overall, the album has a special kind of gloom and darkness to it that I can't fully explain or justify with words. It's well written, well thought out and nails its conceptual themes. It's definitely a massive advancement 2016 predecessor Dis Manibvs.

From a production standpoint it brings me back to what I first loved about the black metal sound. Its very raw, not in the traditional sense but the texture and the atmospheres that have been created to make this massive sonic picture in my imagination brings me back to when I first heard Emperor. The  distorted guitar tones have this raw and cutting aspect that will hit you instantly, in contrast the cleaner tones have a really delicate and enlightened feel, even if they are playing melancholic melodies. The bass tone is gritty and heavy, which really puts emphasis the guitars when they go to the higher notes. The drums sit nicely behind all of that but come through with unrelenting accession. I quite like the toms being tuned down a bit as well, so it adds more oomph behind the riffs. The mix as a whole sounds anthemic in the most black metal way. Huge amounts of space and layering has been produced to make every song sound like it's being played in a darkened cathedral, which helps nail down this albums concept about being alone and transcending. Overall, an awesome mix that has made this album really stand out for me.

Some awesome work from one of Germany's finest bands, if you want an intriguing and complex album to listen to then I suggest checking out When We Are Forgotten now!