The HU - The Great Chinggis Khaan 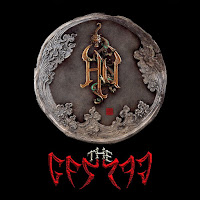 The HU - The Great Chinggis Khaan

A rather unique entry on the Fjordhammer blog with this one. The HU have slowly been carving a name out for themselves over the last year and a half with singles such as Wolf Totem and Yuve Yuve Yu, and giving metal some Mongolian flair. No doubt they will have drawn comparisons to the mighty and infamous Tengger Cavalry, but The HU have focused more on the folk element than the metal element which is what sets them apart from Tengger Cavalry. Either way, we can all appreciate the uniqueness of traditional Mongolian folk accompanied by the thrashing of heavy guitars. The Great Chinggis Khaan is another awesome single in the amazingly quick rise of The HU and comes off of upcoming album The Gereg.

Musically, the song is an elaborate mixture of Asian melody and harmony combined with the tenacious grip of metal. The songs slow build really sets the scene, almost like you're riding on horseback over the Mongolian Steppe admiring the landscape and reflecting on your mighty ancestor. Once it gets into the heavier section, all be it a brief section, it feels like you're charging into battle alongside Ghengis Khan himself. The use of traditional instruments and throat singing is what really drew me to this band in the first place, so once I delved in and became hooked. The band have a really good knack for writing really good riffs, that become more memorable as it is typically on instruments you've never heard before. While the song and album title suggests things to do with the life and times of the great war leader and emperor Ghengis Khan, they're bringing more than the stories from the Mongolian Steppe with this song in my opinion. For me The Great Chinggis Khaan has resonated the same sort of feelings I get when I listen to the likes of Wardruna and Enslaved as some elements are sonically very similar. The clashing of west and east is awesome and something I really admire in bands coming out of eastern Asia. I have digressed a little. Similar to Tengger Cavalry, the song does tend to have this galloping nature to it, obviously with Mongolian culture founded on the backs of horses this is to be expected, but it makes it really easy to get into the groove of the song. The heavier riff will definitely canter across my mind for the rest of the day I feel. Overall, this hybrid of Mongolian traditional music and metal is always great to listen to and elicits feelings of power and epic ness.

Production wise, the song sounds massive in the heavy sections and spacious in the slower sections. The play on the dynamics really makes the song for me, so when the heavy sections do come in it has much more of an impact. I love how the production team have achieved a really naturally and earthy sound for the acoustic elements and not soaked it in reverb. It all ties into that slow build of the songs storytelling aspect. As it slowly builds the mix gets more layered and spacious and epic. Guitar tones are spot on, can't fault them, they come in, cause chaos and leave yet don't trail too long as to interfere with the next quieter section. The drums are interesting, they're very tight sounding overall, but they don't feel centre stage for the rhythm of the song as only the snare and the kick are standouts with the high hat and the cymbals sound quite than I would expect them too. The drums are intermittent though the song so that's what leads me to that conclusion. Overall, the song has a really awesome and natural sounding mix, by that I mean it doesn't sound too polished but it does sound very professional. It gets the best out of the traditional Mongolian interments and showcases them in the best light possible in my opinion.

Anyway, I can't wait to here the rest of this album and attempt (completely fail at) Mongolian throat singing! Check out The Great Chinggis Khaan now!
Single Reviews