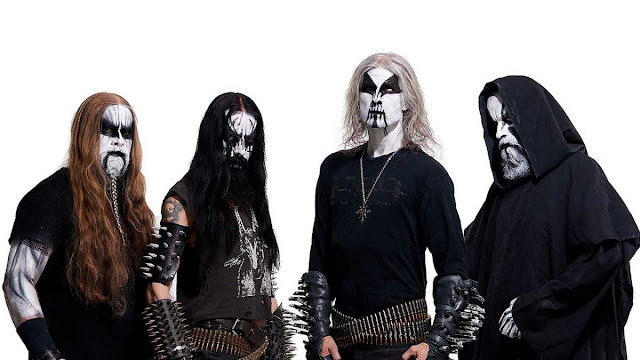 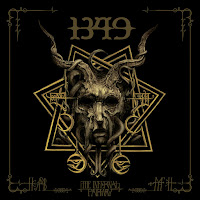 A scintillating rollercoaster of brutality and ruthlessness, 1349 are once again pushing the boundaries of black metal with new album The Infernal Pathway. Arguably one of Norway's most underrated black metal exports and know they are both better at the basics than most yet still hellbent on getting weird and progressive at the right moment. This is a band that has fascinated and bewildered me in the best way possible, when you think you're getting comfortable with a song when something changes that shifts your attention and ultimately peaks your curiosity so much you have to rewind and listen to it again. Not an album to be missed by ANY metal fan, let alone black metal one.

Musically, it has all the hallmarks of traditional black metal composition. With songs like Enter Cold Void Dreaming and Towers Upon Towers being the under the strongest of black metal influences. Even so, there is still something very progressive about this album when you consider the band's back catalogue. Although The Infernal Pathway is ultimately more refined and focused it follows the same experimental path as 2009's vehemently experimental Revelations Of The Black Flame. While it strips away some of the roughness of what made 2014's Massive Cauldron Of Chaos great, its replaced by a dark, eerie eternal atmosphere which are used in greater numbers. With that in mind 1349 are still militant black metal veterans everywhere else. With this new prog influence that has been carefully injected through out the album it makes it a fascinating album to listen to with all these strange dissonances and nuances not previously heard in some of the band's predecessors but you feel like it's been there a while because it's been executed so professionally. For me Dødskamp will always be the song that backs me up on that sentiment, to date it is my favourite song by the band, relegating 2005's I Am Abomination to second place. It's fast and brutal yet it's interludes (stuff that isn't blast beats and chaos) contain a very atmospheric and melodic path through the overall discordance and madness of the song. Dom Lawson from MetalHammer stated this "the previously released Dødskamp begins as a restrained shuffle towards accessible gothic rock, before erupting into a more textbook display of nihilistic vitriol" and I frankly couldn't sum the song up better myself. The stand out song, Stand Tall In Fire is phenomenal and the best possible track on this album to close a journey through an arctic tundra of riffs and hellfire. This song will march you straight to the gates of hell under the allusion you'll serve Satan for eternity and then throw you into the abyss without hesitation or remorse. In short, this song hit me like a truck (metaphorically speaking of course). A barrage of riffs and more subtle doom filled, foreboding drone sections of discordant melodies. Overall, this album shows you the versatility of a band that is not afraid of breaking black metal's self imposed rules. By paying a homage to the sounds of previous bands with its unrelenting force the band has been able to look firmly into the eyes of the scenes future and produced a record that I thing we will call a classic in the next twenty years.

There has definitely been a production overhaul in the 1349 camp. Whilst 2014's Massive Cauldron Of Chaos is a raw and unrelenting beast, The Infernal Pathway has opened up to the atmosphere instead of going down the same dark dungeon path. I've noticed a trend in this generation of black metal releases where the mixes, although still having this visceral and raw foundation, are a lot more expansive, this album is no different. There is a great use of the stereo field and it feels like you're surrounded by this wall of layered yet precise cacophony of sound, which is awesome. The guitar tones really speak to me on this album, the whole fuzz/distortion thing that they have going on yet sound surprisingly clean at the same time is magical to say the least, more so because I can hear every single chord and note played with a crystal clarity. The same applies to the bass, the thickness and fullness of the tone accompanied by the fuzzy/distorted guitars really fills your ears and provides a strong foundation for the guitars to do their thing on. The drums are pure arctic wind, ruthlessly fast but like the guitars I can hear everything so clearly that I'm starting to pinpoint individual kick drum hits. As for the low end, the toms even have a surprising amount of weight to them and the cymbals cut through like the sharpest knife known to man. Overall, this is a benchmark in production that I would love to try and achieve, everything fits together so well and really brings out the songs as they are meant to be heard, phenomenal job by the production team.

I've waited for this album for a while and it has not disappointed me! For some I'm probably praising it too highly but I don't really care for me it's an instant classic because of the way it has been so expertly executed in all departments. So, if you want a dose of Norwegian ice and chaos, take The Infernal Pathway.