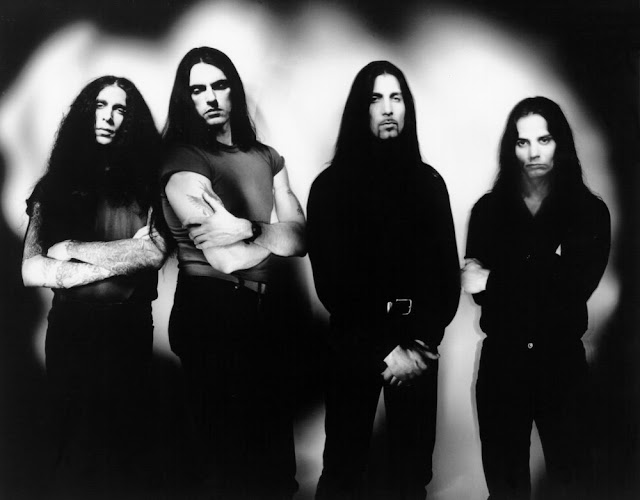 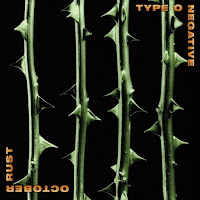 One of the most recognisable and influential gothic records available, October Rust is a somewhat magnum opus for Type O Negative, as it contains some of their most famous and recognisable songs. While 1993's Bloody Kisses in itself was a groundbreaking goth album, it harnessed a more negative side to it, and was more doom like in comparison. October Rust showcases the band's more melodic and romanticised side, and it captured the imagination of a gothic audience ready to embrace their dark romances. For me the album introduced me to a new side of alternative rock and metal, that slower songs can be just as emotionally charged and heavy as the fast and brutal ones. From that point onwards Peter Steele became a weird inspiration for me and not one many people would expect. Even so, this iconic nineties album has a very unique atmosphere and sound, it's innovative yet simplistic in some ways but that is what makes it effective. It's not your usual metal album for sure!

I feel I need to state that even though there is a seriousness in this album, the band weren't always all doom and gloom (despite the most intensely creepy love songs that has ever been written, Love You To Death). With linear notes and lyrics often being goofy as the band had a very lighthearted opinion about themselves. Another odd detail according to metal-archives.net, "Every album since October Rust is labeled as a "product of Vinnland" on the back cover. Vinnland is an imaginary country which, according to Peter Steele, is the US and Canada merged into a single nation"". Also, the chilled physical features of frontman Peter Steele, typified and magnified the goth attitude of the band exponentially.

Musically, the first thought that comes to mind is that this is a perfect winter album. The title of the album itself conjures up imagery of orange, red and yellow leaves falling to the ground and life slowly dying as we transition from Autumn to Winter. With it's dark atmospheres and spooky imagery in songs like Be My Druidess and Love You To Death, this is the album that cemented Type O's goth reputation, more so than Bloody Kisses. You could say in short that this is "A haunting, melodic, somber, gorgeous opus from a group that severely overachieved on this album." (BigHans, 2009). It also seems very odd that a metal album strangely relaxes me, there is something eerily chilled out about this album that I love. With a combination of gloomy and heavy elements accompanied by a devious sense of humour, they have carved out a niche completely apart from the rest of the gothic bands at the time. The layers of texture and atmosphere, build the intensity of each song and they create this fantastically dark imagery that keeps you coming back for more to explain it. The album contains "slabs of doom collided with a pop sensibility that had been ‘tested’ before but never ‘tried’ with this much conviction." (Jennings, 2016). I still can't get my head around how the band managed to produce something so unique and instantaneously classic that has gone on to influence so many bands in various ways as well as reinventing almost what it meant to be goth. Mixing epic balladry with heavy riffs, the album appeals to hardened metallers, goths and doom fans alike. Whilst some of the more humorous elements such as the false start tracks i.e. Bad Ground is lost on me, in an effort to not take themselves seriously they have created one of the most serious goth staple albums in existence, even if it does divide opinion. Even the albums negative reviews play into the band's hands, this album will never surrender for anything. Overall, it is an atmospheric and melancholic masterpiece that has captured my imagination endlessly and how it is simple but effective. I'll never know the albums secrets to success but what I will always respect and appreciate is the artistry that Peter Steele possessed.

From a production point of view, it is easily dateable. It is so painfully 90s and I absolutely love it. Even with me saying that it does still feel fresh in my opinion as I haven't heard anything like it since.  My favourite element of the album all throughout is the synths, sticking with this hybrid organ/synth sound throughout the album in various guises. That organ/synth for me is at the centre of the sound of the album, for me it's what ultimately gives it that gothic appeal and fills the spaces around the guitar, bass and drums. As for the bass itself, its thick and epic, if anything for me it makes the guitar sound insignificant as it really carries a lot of the songs on the album. The slight overdrive has a really warm  feel that you get from a valve amp. The guitar, even though it seems to be in the background at times, definitely carries the melody as well as adding to the atmosphere with it's variety of effects. The bass, guitar and organ/synth are all mixed together really well to emphasis the sense of atmosphere in the songs compositions. All this is pinned down my the drums which are tight yet paradoxically spaced out. With a chunky and pulsing kick drum alongside a snappy, crisp snare, they bring the power in the way the are mixed. There is an overarching rough and rawness to the album that I enjoy as well, which makes the more ballad-y elements gritty and interesting to listen to. Then in some areas its polished to the technological capabilities of the 90s that does give it this cheesy element, even so, it doesn't detract from the album at all. Overall, there is a lot to admire about the production of this album, as no one has seemed to have successfully emulated or recreated it faithfully, which makes it special.

Overall, "There was something relatable about Type O Negative for both men, and women, and everyone in between. Their career of albums is sprinkled with over-the-top anthems, self-indulgent rants, and goth-boy problems. It also has brilliant songs of true pain, loss, and self-loathing. Expressed in the deep tenor and bass of Steele's voice, Type O Negative is a perfect combination of front man and accompanying musicians." (Mercer, 2017). I fell in love with Type O Negative as soon as I heard them and my everlasting first memory of Peter Steele (which is ultimately tragic) was seeing his death reported on the first ever Kerrang! magazine that I bought. This album has a very special place in my musical heart and will always get me in the mood for Hallowe'en and winter. So, if you want a dose of angsty goth music, Type O is where you go!