It's been two months since I wrote on of these updates, for that I do apologise! I have been in the throws of an uninspired and unmotivated period of time the last couple of months with life seemingly getting in the way at every turn. I'm pleased to say that I am no longer there though! Some of you may have seen already on my Facebook page that I will be releasing the third Vanaheimr EP, The Ghosts Of Our Past, on the 2nd December 2019. I summed up how I felt in an Instagram post not so long ago;


6th July 2018 31st October 2018 14th February 2019 2nd December 2019 Dates may not seem like much, but to me these particular ones all hold a special significance. Four days where I've released an EP/Single under Vanaheimr and each one has been a phenomenal journey from conception to releasing. I've written, recorded, produced and released this music all by myself and for me that is massive. To have had the confidence to share my music with the world would have been non-existent to me 6 years ago. Now I'm sat here with nearly 5,000 streams worldwide on Spotify and I honestly can't believe it. With the release of my third Vanaheimr EP on 2nd December this year. The Ghosts Of Our Past feels like the concluding chapter to this trilogy and period of time. I can now begin to move Vanaheimr in a few more different directions. I can't wait to share The Ghosts Of Our Past with you all, thankyou to everyone who has checked my music out, shared it, etc. Just goes to show sitting in your bedroom with a guitar can lead to something. Check out all Vanaheimr releases on all major streaming services! (Spotify Link; https://open.spotify.com/artist/3LnYqfGthqCCddnKVwKJKB?si=Zxh4hXwaQYaBLaaXXAXlfw ) #Metal #Music #DIY #IndependentArtist #Vanaheimr #Fjordhammer #BlackMetal #DeathMetal #Prog #Dark #SelfProduced #MetalMusic #MetalCommunity #MetalFamily #Trilogy #Conclusion #Global
A post shared by Tom Fordham (@tfordyy96) on Oct 2, 2019 at 2:06am PDT

It does feel like an end of an era for Vanaheimr, but I am looking forward to taking the project into new areas and I may or may not have started work on EP IV (you know I have it's my usual fashion to immediately start work on the follow up after the pressure of announcing a release is off). I would type more but I'd only repeating myself with what has already been said in the Instagram post. The Trilogy as I have called it concludes on 2nd December and Vanaheimr will be reborn slightly differently in the New Year.

Fjordhammer has been going from strength to strength, gaining more readers globally and I recently had my first band submission courtesy of Frozen Ocean and Heather Grave (you can check out that review here). The most recent big share was from Arx Atrata and Imperative PR of my review of Arx's The Path Untravelled. I'm eternally grateful for every share across multiple platforms and these two should bring in some new readers to Fjordhammer Music which I massively thank them for. 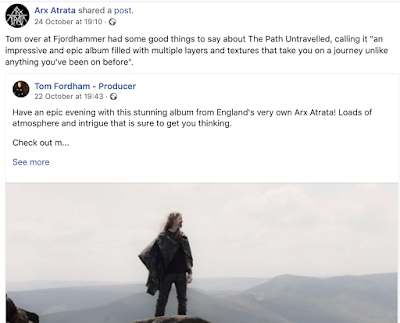 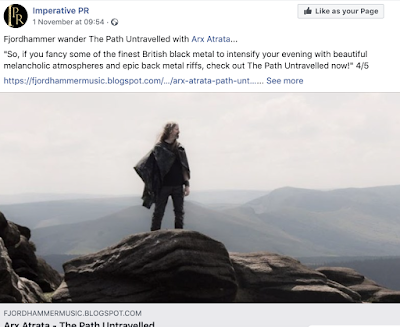 I have also started The Metal Scholar's Listening List playlist on Spotify that you can follow and enjoy. It contains every single of the week from the first ever list to the most recent and the playlist will be continually updated each week so you can hear the all the tunes that make up The Metal Scholar's lists. If you fancy it give it a follow below;


In essence, everything is ticking over quite nicely in both Vanaheimr and Fjordhammer camps. As always thank you all for your continued support in both ventures. Keep Rockin' 🤘🖤