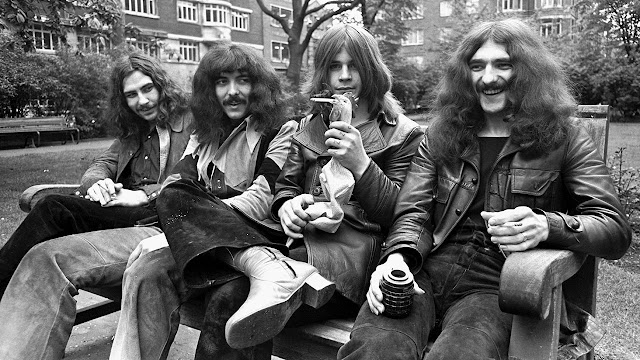 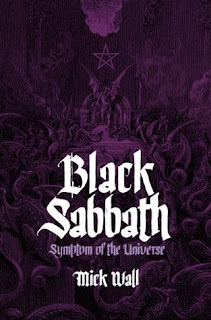 Synopsis (Amazon.co.uk): Way back in the mists of time, in the days when rock giants walked the earth, the name Ozzy Osbourne was synonymous with the subversive and dark. Back then, Ozzy was the singer in Black Sabbath, and they meant business. A four-piece formed from the ashes of two locally well-known groups called The Rare Breed (Ozzy and bassist Geezer Butler) and Mythology (guitarist Tony Iommi and drummer Bill Ward), all four founding members of the original Black Sabbath grew up within half-a-mile of each other.

This biography tells the story of how they made that dream come true - and how it then turned into a nightmare for all of them. How at the height of their fame, Sabbath discovered they had been so badly ripped off by their managers they did not even own their own songs. How they looked for salvation from Don Arden - an even more notorious gangster figure, who resurrected their career but still left them indebted to him, financially and personally. And how it finally came to a head when in 1979 they sacked Ozzy: 'For being too out of control - even for us,' as Bill Ward put it. The next 15 years would see a war break out between the two camps: the post-Ozzy Sabbath and Ozzy himself, whose solo career overshadowed Sabbath to the point where, when he offered them the chance to reform around him again, it was entirely on his terms. Or rather, that of his wife and manager, daughter of Don Arden - Sharon Osbourne.


Everyone should be synonymous with the name Black Sabbath (if you aren't you've either been living under a rock or are too young, the latter of which I won't pass judgement). The Godfathers of heavy metal, innovators of doom and connoisseurs of chaos are famous the world over for the heavy and forbidding raw power and destructiveness of their music. After reading this biography I realised that I have been sold the immortalised nostalgia of 1970s Sabbath, I never realised how bad and turbulent the 1980s and 1990s were for the band and the sheer amount of chaotic drama that happened behind the scenes. Even so, this powerful and brutally honest insight from someone who has worked with the band on and off has been a gripping and interesting read.

I went into this thinking I new the majority of the band's history as I understood it was a rocky one. How wrong I was! I didn't even know half of it! What really surprised me about the band was the sheer extend that they were screwed over by management companies and if all the legal and political wrongdoings hadn't happened albums like 1976's Technical Ecstasy and 1978's Never Say Die! would ever happened because their mojo wouldn't have been completely drained, I'm speculating of course. Even so, the Black Sabbath story is one of super echelon highs and the deepest of the deep lows. Which makes the rollercoaster story so interesting. With the band's name being the height of hard rock in the 70s to being no more than a piece of dog shit on someones shoe during the late 80s/early 90s. It really is remarkable how a band has gone through so much that could have killed any normal band off, to not only survive but to do so with a lasting legacy in tact. Despite all the backstage drama and anguish, the band pulled through. One thing the book really brought out to me is how much Ronnie James Dio did for Sabbath. I often think his album contributions are often dismissed entirely because it is not Ozzy, but the sheer creative force that Dio was is mind blowing. I'll be honest the Dio years albums aren't my go to but having read up and had another listen, should Dio have not been expelled at the time when that version of the band were climbing to its peak, what sort of legacy would the band have now, and would there have ever been a reunion with Ozzy at all? Anyway, as far as content goes, this book is packed full of the constantly evolving and snowballing drama of Black Sabbath.

I think the person I feel most sorry for in this version of the Sabbath narrative is Bill Ward, I often feel like he's forgotten when fans discuss the band but his drumming alongside Tony and Geezer's riffing is what made Sabbath. That rough round the edges Jazz influenced style that locked in with Geezer's bass to create this free flowing rhythm section that made Sabbath great. Although he was the butt of a lot of the band's pranks and japes, he ultimately had had enough of the turbulence of the band but he never lost his love or passion for the band (only if it had Ozzy in it would he really play). The heartbreaking thing was seeing how deeply affected he was by John Bonham's death and how it derailed him but also helped him get out of his addiction despair. Even so, seeing the success of Dio and Ozzy outside Sabbath was epic to read about and how both eclipsed Sabbath for a time. One of my favourite parts of the book is the chapter with a large part of Randy Rhoads story and how Ozzy was a bit of a dick to him at times. I never really knew much about the innovative and free thinking guitarist but with my new found knowledge of his virtuosity and creativity (I also didn't know his first band was Quiet Riot!), I have a new found respect for him.

Highlights aside, Mick's writing style is very engrossing and keeps you engaged from start to finish. His depth of knowledge is showcased with intricate details of events that transpired, supported by quotes and interviews from people that were there. While he does get some criticism for the way he comes across, which I can understand as sometimes it does come across as subjective rather than objective, it is ultimately told by the people that were there. Mick ultimately adds clarifications and possible some descriptive embellishments to add emphasis to trigger a reaction from the reader at various points in the biography. Overall, it was a well written book that often didn't beat around the push and told you how it is. There was no disguising of the drug problems and addictions that riddled the band throughout their careers amongst other things. Its a hardcore account of one of the biggest bands in the world.

In my opinion this should be essential Sabbath reading as it is by someone who has worked with them and been part of the chaotic Black Sabbath story, words coming straight from the horses mouth.
Book Reviews