Suffer No Fools - We Die As We Live 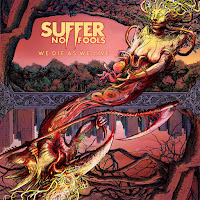 Suffer No Fools - Children Of The Grave (Black Sabbath Cover)

Before I start this review, this is a bit of advice to myself and to you, ALWAYS check your message requests! I had a message from Alex sat in my message requests on Twitter that I originally didn't see until shamefully recently. I just want to thank Suffer No Fools first and foremost for waiting over two weeks for me to respond and giving me the opportunity to have an early listen to their upcoming album We Die As We Live. I'll say this up front, after doing a little bit of research on the Hertfordshire outfit, I've been very impressed. Not that the band were to know, but if you nail a cover of Black Sabbath's Children Of The Grave (my favourite Sabbath song!) like these guys have on their 2018 EP Them Aerial Children you're sure as hell going to grab my attention! There is something refreshingly old school about Suffer No Fools's sound, a contradiction in terms I know, but it's something I've very much grown to like. It's rough, ready and raw, but executed to perfection, this band isn't afraid to slap you around with ball busting riffs. With all it's raw intensity We Die As We Live is a rollercoaster of bombastic heaviness and soaring melody.

Musically, from my perspective and initial listen I get hints of influences from early Metallica, Trivium, System Of A Down (especially in their more noisy moments on Toxicity, B.Y.O.B and Chop Suey!) and Killswitch Engage but there is definitely something unique here that I can't quite put my finger on. Either way, it is quite a combination to get your head around! From the beginning to the end We Die As We Live it is packed with all killer and no filler riffs. Riff after riff comes at you with such velocity  and impact you're going to wonder what the hell happened to your ear drums. There is very strong rhythmic chemistry between the bass and drums that carries the groove and allows the guitars to really show off with screeching shredding and fluid low and high harmonies. The song that really stands out to me as a modern metal classic, and is probably my personal favourite, is Six Feet Deep, there is a very dark edge to it and infectious groove that I can't help but move to. It's an absolutely savage riff that pulls no punches, and reminds me a bit of The Defiled's The Ill Disposed, for it's ferocious attitude and over arching darkness. Another aspect that really jumps out at me is the vocal harmonies that are used throughout the album, my favourite example of this is towards the end of Wicked Temptations. The layers and texture that all the harmonies give each song is genuinely stunning, the attention to melody and harmony that transcends the album not only adds to the dynamics of the album but makes it an incredibly enjoyable and epic listen. I'm particularly entranced with the vocal lines as there are some melodic runs and devices with the Arabic/Phrygian scales that I'm not used to hearing often but they also ignite my curiosity with every listen and showcases the virtuosity of Ali's singing alongside the gruff nature of his voice, it's definitely not something you hear everyday. Overall, We Die As We Live is a very well written and carefully constructed album that not makes you think but enjoy every minute.

I want to highlight the sound the band have created is very distinct and going back to my point about being refreshingly old school, there is something to be admired about actual riff writing. In my opinion. With Suffer No Fools, you can hear the dedication and hard work that has gone into their songwriting and sound. Listening to 2018 album Songs For The Restless Youth, and comparing it to We Die As We Live there is an evident development and strong desire to make their sound as honest to them as they can whilst stretching the boundaries of their creative comfort zone.

From a production standpoint, there is a carry over from 2018's Songs For The Restless Youth in the way that it initially sounds. The DIY nature of the band is shown in the production, which definitely accentuates the music, these are hard hitting riffs and they have a buzzsaw edge so I think a phenomenal effort has gone into retaining that sound. Stepping away from the cleaner production of their influences make the band stand out to me. The rhythm guitar tones are crunchy and chunky but give enough space for the lead to cut through with a sharper clarity. The over arching grittiness and DIY nature of the production really compliments the songs, I feel if this rough edge wasn't there it would sound like a completely different album sonically. The drums have good punchy kick that fills a lot of space in the low end and adds a substantial weight to the behind the chunky rhythm tones, whilst the snare snap slaps you in the face with every hit. Where cleaner tones are used, there is a really good balance between effects processing and tone, so when the distorted guitars come in they have a much bigger impact on the song, this is a great use of dynamics in my opinion as it thrusts the songs forward with ruthless efficiency. Overall, I love the production on this album, its raw yet balanced with a real consideration in regards of getting the absolute best out of the songs.

I really enjoyed We Die As We Live, it's a breath of fresh air for me and I am definitely expecting some big things to come from it! There is a bright future ahead for the band and I look forward to seeing it. So, if you fancy some aggressive and powerful, raw melodic metal from Hertfordshire, and  if you want to know more about Suffer No Fools whilst pre-saving We Die As We Live follow the links below;

Before I sign off, I want to thank Alex and Suffer No Fools for reaching out and giving me the opportunity to listen to the album, it's been a privilege and an honour (despite me not seeing the message for two weeks!). Awesome album lads, keep the tunes coming!


Album Reviews Sounds Of The Underground