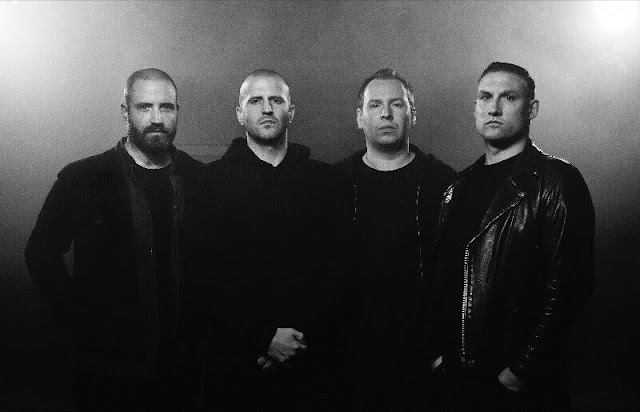 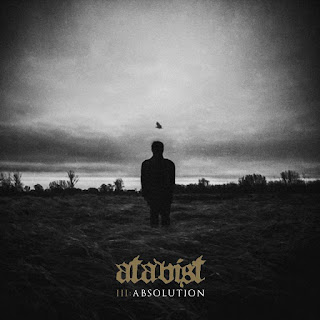 I was unaware that Winterfylleth was born out of this band, and it's the reason they play in Drop A tuning. Anyway, I am a new fan to Atavist and what an album to kick off my new found love! A dark, brooding and mournful album with sorrow laden melodies laid out for you with slow, foreboding pace. I'm usually more into the psychedelic, occult rock side of doom and sludge, but Atavist's latest release, is making me reconsider the more mournful and droning anger side of doom. In its fuzzy, atmospheric landscape, you get lost in a dark and hurting world that resonates with you on multiple emotional levels whilst being able to vent visceral and primitive anger.

Musically, there is a lot of drone aspects to the album that grab me instantly. Drone isn't something I've explored a lot of and I'm still very green when it comes to listening to it, but one comparison I can draw is that the fuzzy, drawn out riffs remind me very much of Sunn 0))) but with less white noise. Each song has a slow, hypnotic march quality to it that lulls you into a strangely meditative state but also makes you feel quite reflective with its overarching sense of melancholy. One thing that stands out for me the most on the album is the string arrangements, the sorrowful violin in Loss and towards the end of Absolution are quite haunting and really sets the tone for the rest of the song, in terms of atmosphere and mood. From my perspective each song takes me down a different pathway of emotions and reflections, the visceral anger that I can feel in Struggle and the resolution of the journey with Absolution is intriguing. I could be reading too much into the songs but they have resonated with me in the most peculiar way over the 58 minute run time that I can't help but look into them and analyse them deeply. Even though the dynamic changes aren't initially obvious the band tone it down and ramp it up with perfect execution, just when you start to get comfortable they hit you with a huge, fuzz driven chord sequence that sparks you awake. Another interesting aspect of this album is that some of the leads sounds very Black Metal in style with the tremolo picking, could this be the band incorporating a Winterfylleth influence, who knows, but I really like it as it livens up some of the quieter sections in between heavier riffs. The layering of riffs and melodies create this vast sonic expanse that you get lost in, and I quite frequently find myself staring into space letting the album wash over me. Overall, this is a beautifully bleak album, with a variety of emotions on show. The arrangement is what makes it so impactful for me and to easily lose myself in.

The album's production is huge, every space is filled with and infinite grandeur of fuzz and distortion. The guitar tones are my favourite as they almost sound like Black Metal guitar tones in their chainsaw like fuzz and distortion but also have a deep thickness to them that is reenforced by the bass. With the songs being so slow the drums don't rain down on you in a thunderous tirade but on this album they have this cavernous thump to them that I love. The kick is heavy and thick and with every hit echoes into a space that sounds like a Cheddar Gorge cave, with a shotgun snap of a snare doing the same thing you can slowly bang your head along. The cymbals cut through the fuzz like a katana and add this high end white noise sounding contrast to the rest of the mix. Overall the album is mixed with an eye on the sonic expanse that lays before it, and it envelopes you with its spacious and cold embrace.

Even though this album is nearly an hour long and consisting of 4 tracks, it really didn't feel like that to me. Either way, I'll definitely be exploring Atavist's music further. If you fancy getting lost in some heavy fuzz, spin III: Absolution today!