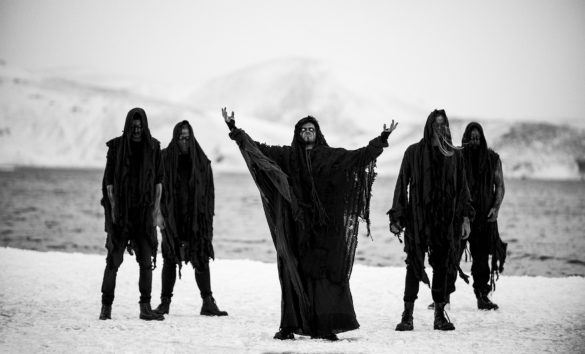 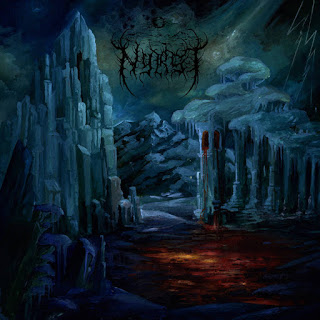 Hailing from the cold, dark land of ice and mountains, Nyrst are the latest top quality black metal band to come screeching out of Iceland with blistering pace. I remember the hype in the Black Metal Promotions group when Nyrst dropped their first single Orsök and it got me excited! Icelandic black metal has a special kind of bleakness and aggression to it that always appeals to my inner darkness and this album is no different, I can feel the cold arctic winds of Iceland wrapping their long, icicle fingers around my very soul. Considering this is a first album it is a phenomenal feat of aggression and evil black metal, and has fast become one of my must listens of 2020.

Musically, the first thing that stands out is the mixture of vocal styles, ranging from the operatics of Mayhem's Attila Csihar to the symphonic style shrieks of Ihsahn from Emperor. You may think it is an unusual mix but Snæbjörn has adapted it into his own style that merges the sorrow, pain, aggression and sinister intent into a beast of a screech that is distinct and unique. The riffs underneath the darkened grandeur of the vocals has a very traditional black metal edge to it. Reminding me of bands like Trelldom and Urgehal, that not quite symphonic but the highly aggressive cold atmospherics that drew me to black metal in the first place. One thing that I really like about the album is Athöfn interlude going into the 10 minute epic that is Hvísl Hinna Holdlasusu. The interlude really sets the scene for the song but also creates this vivid imagery of a cold, unforgiving mountainous landscape that holds sorrow and bleakness (on a lighter note it wouldn't sound out of place as a Skyrim atmosphere, if Skyrim had more black metal, which come to think of it would make it 10x more metal than it already is). The album itself has plethora of creative directions moulded into one with atmospheric chanting being heard on Turner Í Fjarska and Æðri Verur which give those songs an epic presence to the mournful melodies heard throughout, this is a band that has taken the best of their influences and created a beast in the form of their sound. Whilst the thunderous chordal riffs echo that of traditional black metal there is a calculated and very enjoyable discordance that makes the lead melodies and solos have a greater impact in my opinion, capturing the essence of an evil and chaotic atmosphere. Overall, the album is very well written and gives me a hint of nostalgia before launching into the new face of black metal today, that could be a interpreted as a homage but it is very much a passing of the torch. I am expecting big things to come for Nyrst!

The production reminds me very much of fellow Icelanders, Misþyrming's Algleymi album, in the way that it has captured the chaos and rawness of Icelandic black metal. That grit and rawness is ever present but there is a cold and clean professionalism in the finished product. I really love the rhythm guitar tones, sharp but chunky enough in equal measure, to allow the deep bass tone to dominate the low end of the mix. The kick is thick and thunderous with a snare that grabs your attention with a harsh snap that cuts through the mix. I really like how the leads and vocals have been semi-mixed into the background with loads of reverb to create this deep, wide and cavernous effect on the songs. Overall the mix captures the harsh and unforgiving environment that the music creates and takes you to that place with devastating efficiency.

Nyrst are definitely a band to watch and this album flew by I was so immersed in it. A hefty dose of traditional and atmospheric black metal in one chaotic package! So, if you want to transport yourself to the Great Cold North, listen to Orsök now!