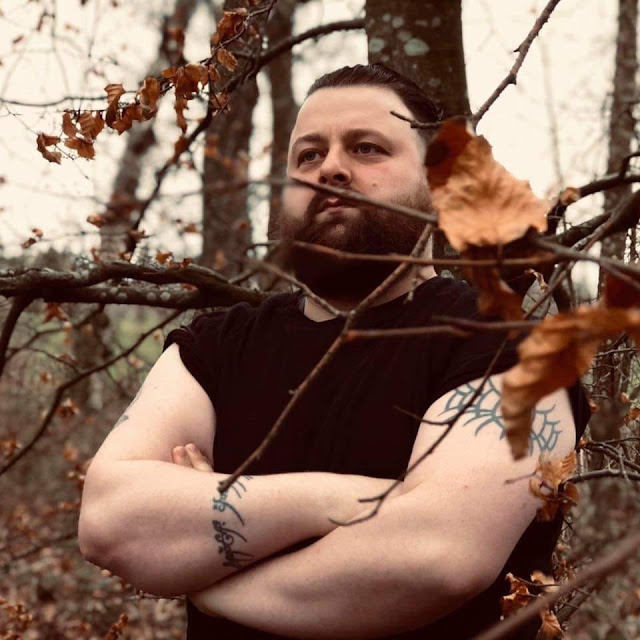 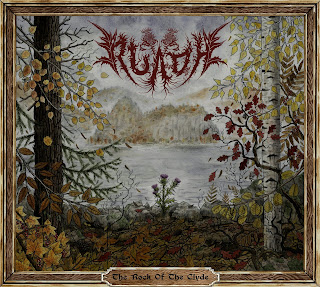 Another atmospheric black metal solo project hailing from the mighty Scottish city of Glasgow, and this time under the name of Ruadh! Ruadh captures a rolling and epic landscape of Scotland fusing his music with Scottish folklore and history. With soaring, melodic guitars accompanied thundering bass and drums it is easy to imagine yourself in the various scenes that the music is depicting. Scotland itself is becoming quite the place for atmospheric black metal, so it seems. With Saor and Cnoc An Tursa leading the way, Ruadh is another member to this ever expanding clan!

Musically, I'm going to address the big elephant in the room straight away and say that the similarities between Ruadh and Saor are very noticeable. Which unfortunately for me detracts from the album a little bit, as the song structures and melodic/harmonic make up are very similar to Saor's Forgotten Paths and Guardians. I can understand being influenced by what another artist has done but it does seem like some areas of the album are too similar to something else I've heard. With this in mind, it doesn't mean that the contents of The Rock Of The Clyde is bad, there are some areas where Ruadh stands apart from the comparisons. An example of this would be in title track The Rock Of The Clyde which has mostly clean vocals to carry a strong melody over restless and relentless chords and leads, these clean vocals can also be heard on Fields Of Heather and taking on a more mournful and sorrowful tone. I like the texture and layers that these vocals bring to the melodies and dynamic of the songs, bringing the momentum down to reflect and give more oomph to the distorted section that comes after it. The music itself takes you to a haunting and mystical Scotland fully immersing you in this ancient land. You can see yourself as an adventurer going through the glens and mountains that Scotland is known for. I think one song, whilst its intentions are to slow the energy down before launching into the album's closer is Only Distant Echoes Reign Pt.1. I like the idea of the song and I think it works on its own, but I think it slows the album down too much and with the slow build of Only Distant Echoes Reign Pt.2 I feel the songs as a whole lose a bit of their impact in those closing and opening seconds. From tracks 1-4 I was lost in this world but those last two songs seemed to detract from the overall experience as it didn't really change too much of the formula. Overall, there are some really good vocal passages and riffs on the album that show the project has a great potential and I did enjoy those parts. Unfortunately, I just can't get my head past the overwhelming compositional similarities The Rock Of The Clyde has to Saor's Forgotten Paths. I look forward to future releases from Ruadh though!

The production of the album is one of the best parts of the album. Everything sounds so polished and clean whilst capturing a rawness and grit. I think my favourite production parts are the lead guitar tones, the combinations of delays and reverbs really help the melodies stand out amongst the backdrop of thundering rhythms. The synths are also a favourite as they give the album a huge amount of width and atmosphere that encompasses all the other elements without crowding the space. The bass and rhythm tones are chunky and really help drive the rhythms of the songs. Overall, an incredibly well mixed album!

Whilst I'm a bit unsure about this album, it is still something you can immerse yourself in and there are some good passages in the album that I hope Ruadh can build upon in his next release. However, the banner for Scottish black metal is being flown high and proud so check out Ruadh regardless!