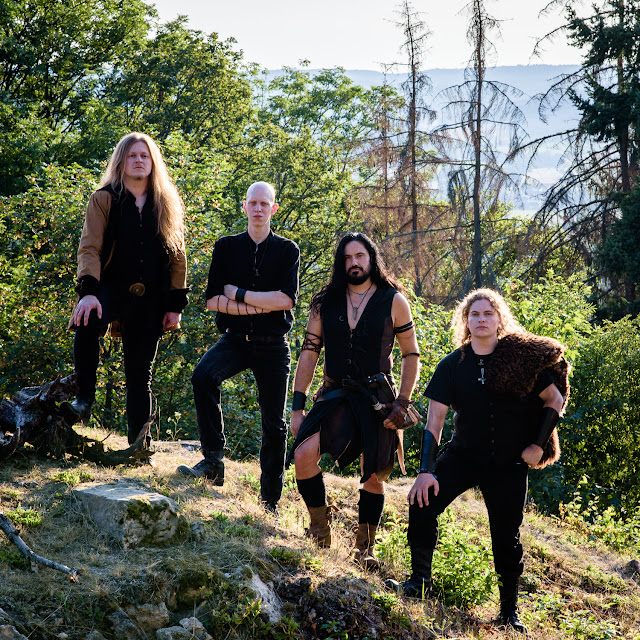 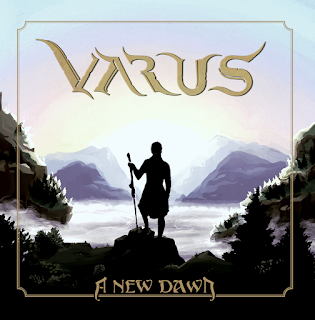 Hailing from Upper Franconia, Bavaria and named after the Roman General Publius Quinctilius Varus, who after being defeated by the Germanic tribes at Battle of the Teutoburg Forest, took his own life and thus leaving a name that symbolises the power and passion that the Germanic tribes had against being colonised. With lyrics dealing with legends alongside the concepts of romanticism, liberty and the art of drinking. So, with a first introduction like that, this was going to be a band that engaged my curiosity with history and metal! With the vast beauty of Bavaria all around you, you're bound to use that imagery to inspire your music and A New Dawn transported me across the sea and into  the depths of Germany and more.

Musically, from it's grand opening passage in The Awakening, you know A New Dawn is here to take you to astronomical heights through the raw power of metal riffs and  the gloriously and passionately composed symphonic, elements. Straight away this album has a huge presence, multi-layered and multi-textural elements stacked on top of each other to make an intricately vast atmosphere that fires the listeners imagination with imagery of romanticised heroic battles and victory feasts in the great drinking halls of history. One thing that stands out to me the most is the band's raw use of orchestral and folk instruments, the way the parts are composed and arranged make it feel like an epic film score for an epic fantasy or historical film on the grandest of stages. With this in mind, a new story emerges with every song, from the triumphant A New Dawn transitioning flawlessly into the darker, imposing Ascheregen demonstrates how well written the album is. These smaller details may be lost on some people, but for me, each song feels like a specific musical movement in a bigger grander symphony with an overarching theme of legendary adventures. The versatility of the band to pack so many different emotions into the album is nothing short of phenomenal, appealing to a primal, ancient instinct and bringing it into the modern world to grip the longing that we all have inside of us to get back to our roots with an honest romanticism. One of my favourite parts of the album is the integration of the acoustic guitar in Ein Lebewohl, the 9 minute epic is packed with so much texture and atmosphere, but the delicate and dulcet tones of the acoustic really resonate with me. One thing I've always loved is listening to bands singing in their native language and although the band do sing in English, the epic nature of the music accompanied by the powerful aggression of German really gets me hyped up. The chanting vocals add an extra layer into the fold and leads you to believe that the song wouldn't sound out of place in a great hall being sung passionately by warriors from all walks of life. Overall, the band have blended together the rawness of metal with the elegant grandeur of the orchestra and folk tradition in a way that I haven't heard for a long time. A brilliantly crafted and forged album filled with love, loss and adventure (alongside a beer or two!). A New Dawn is an ambitious and well executed album that had me captivated for its entirety. The musicianship and compositional skill of the band is nothing short of phenomenal, I have massive respect for the band for achieving something so epic and magical.

The production of the album definitely fascinates me, as I was led to ask myself the question of how they've made it sound so huge but also retain a raw edge? You often get the stereotypical symphonic metal album that sounds well polished and almost too clean, however  A New Dawn shatters that mould in every conceivable sense. Packing a raw, almost black metal style, aggression alongside the huge orchestral and synths without losing an inch of energy. The bass and drums lay the solid foundation in the mix, with bass and kick interlocking but still having enough space to really drive the rhythm of the songs. The rhythm guitar tones add the mid range chunk to the song, so the lofty lead tones can really dance around in the high end and be well supported. I was amazed that nothing clashed at all, sometimes I've heard albums like this where strings and leads seem to mould into this high end mess and become quite piercing. However, everything on this album has been perfectly spaced out so it can show itself off whilst delivering the wider picture with devastating effect. Overall, the rawness really adds to the mix, even when the quieter sections are at the forefront, this album has an edge to it that you can't help but fall for.

As you can probably tell, this album has blown me away in every conceivable way, and I am expecting big things from this album! It has been absolute pleasure to go on such and epic adventure with Varus and I passionately encourage you to do the same!

Album Reviews Sounds Of The Underground