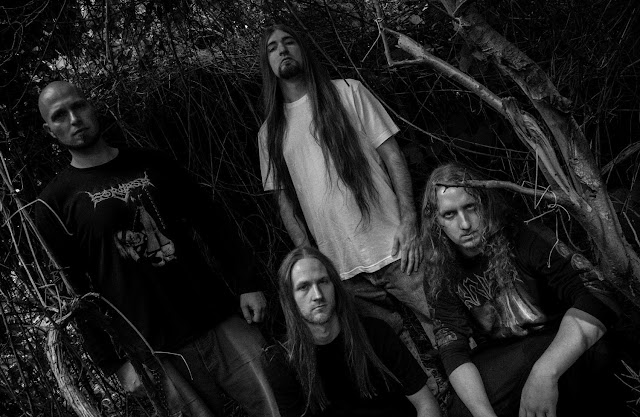 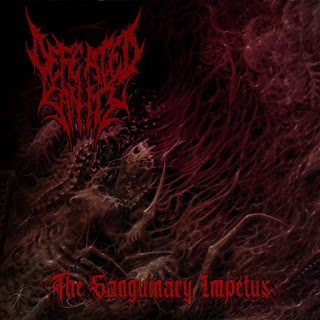 After hearing The Sanguinary Impetus, I feel like my brain has been drilled out our my skull and chucked under a jack hammer and the mush thrown into a blender and given to a hungry cannibal as a refreshing smoothie. Graphic imagery indeed but it's true, this is one of the most mind bending albums that I've heard this year. With frantically precise musicianship, Defeated Sanity showcase their vast technical death metal songwriting experience over the last 20 years, and bring forth a gut wrenching, vomit hurling savage of an album. Easily one of the most brutal and significantly influential bands of the genre, Defeated Sanity demonstrate why they're still on top.

Musically, the easiest way I can put it is, it's like Death and Necrophagist had a demonic love child on cocaine. With classical and jazz influences sped up to the max mixed with a chaotic insanity, The Sanguinary Impetus is an aggressive, all consuming beast. Despite it's thirty three minute run time, Defeated Sanity have packed every song full of hard, crushing riffs with deep, demonic gutturals and brain shattering blast beats. Usually people would say with a run time that short its over before it's began in album terms, but I think if you took any more of this thoroughly enjoyable sonic bludgeoning you'd find yourself in a bit of a brain scrambled mess. Even though the album is neck bracingly fast, the riffs are incredibly interesting for me. Obviously they are at their most brutal being played at 500mph, but I believe if they were slowed down in the style of Death they would sound just as crushing. This is a testament to the bands virtuosity as musicians, this record has blown me away with its musical efficiency. There is no expense spared, every riff feels crafted and built up so it can deliver the sonic bludgeoning with devastating effect. The albums longest song Drivelling Putrefaction, is six minutes of impending doom and intensity that the more feint of heart my need a lie down after! Blending slower doom style grooves with raw aggression of brutal death metal Drivelling Putrefaction is the highlight of the album for me because of its diversity and the disgusting grooves in the riffs. Overall, this album is the antithesis of polished death metal, it's raw, ugly, brutally fast and uncompromising and takes me back to the brutal days when I was first getting into technical death metal.

The production of the album is tight but also holds a buzzsaw in one hand with a demented aggression and uncompromising rawness. The kick drum is like an automatic cannon firing rounds into your skull at a million shells per second. While the snare cuts through with a tinny ringing that is perfect for the genre. The guitar tones are thick and heavy, but surprisingly sharp, I reckon if chainsaws had voice types they'd sit firmly in the tenor range. I'm surprised at how clear they are as every pinch and squeal can be heard really well. The bass fills the low end with a somewhat stereotypical death metal tone that we know and love, but its uniqueness comes from it not being overly distorted and compressed, so it feels the low end more fully in my opinion. Overall an expertly mixed album, that captures everything we love about tech death.

If you fancy a quick burst of ruthless German aggression to kick your day in the arse, then I thoroughly recommend blasting The Sanguinary Impetus on your stereo at full blast so your neighbours can hear it too.