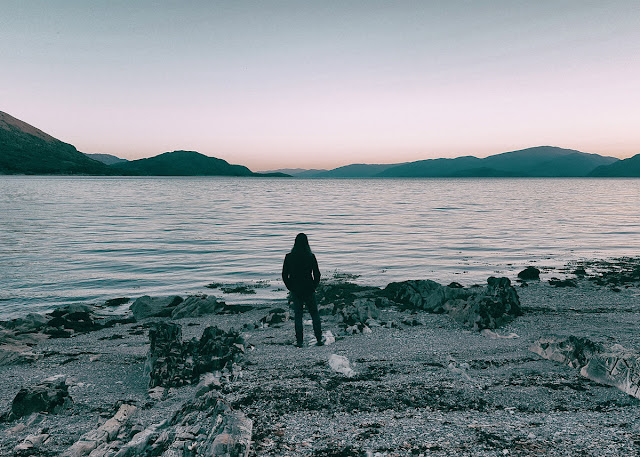 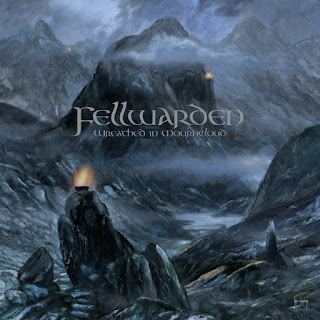 The mastermind behind English atmospheric black metal giants Fen, The Watcher, has returned with his equally atmospheric side project Fellwarden! Packed full of epic imagery, of vast landscapes to the summit of Scafell Pike. Wreathed In Mourncloud is an ambitious amalgamation of melody and melancholy that fires a longing in the heart of the listener to get back to their roots in the dark and shadow landscapes of England. A few of Fellwarden's singles have appeared on the Metal Scholar's Weekly Listening list, so it is a fair assumption to make that I am very hyped about this album. Going by Fen's records, The Watcher has unique way of story telling and composing that captures me instantly. I almost see Fen as the more melancholic brother of Winterfylleth, and the two often go hand in hand in my personal rotation so I can fully immerse myself in a very English form of atmospheric black metal. Fellwarden brings something different to the table, a more down to earth, more traditional form of atmospheric black metal, that is very easy to immerse yourself in.

Musically, I'm straight away drawn to the more ethereal elements of the album. The melodic chants for me are modest, unlike some of the great choral blasts of some other records I've heard, but that doesn't stop them having less of an impact. With this in mind, I'm very much reminded of the Elves singing in the Lord Of The Rings, this beautiful, ethereal and enchanting chorus of delicate melody and harmony that gives you a sense of sorrow or of hope. This is shown especially on the intensely atmospheric A Premonition, I vividly see the graceful and elegant beings that are Tolkien's elves standing before me as if to give me a prophecy on my fate. This track also serves as a gentle interlude before Fellwarden launch into a trilogy of ten minute plus epics. Scafell's Blight is a song that particularly stands out to me, it holds so much aggression and you can see Scafell Pike appearing upon the horizon in front of you and the chanting almost feels like it is being sung in the middle of the valley. The riffs hold a significant amount of melody to reinforce these vocals and the whole thing sounds huge. There is a very heavy emphasis on creating vivid imagery throughout the album and its something that I really enjoy. Unlike The Watcher's work in Fen, the riffs follow a more traditional style, unlike the more progressive riffs found on Fen's 2019 release, The Dead Light. There is a darkness in the album too, something I can't quite put my finger on, but its there, hiding in the shadows of the album carrying a lot of the aggression in some of the faster riffs. The album feels like a real clash of giants with contrasts between faster, louder sections and quieter, slower sections, but the transitions between the two flow effortlessly. There is a really fascinating string/synth arrangement towards the end of An Elder Reckoning that makes me feel a range of emotions because it sounds so epic and beautiful. Overall the album is incredibly well written and captures everything that makes atmospheric black metal great with a darker English twist of course.

The production is a lot rougher compared to Fen's The Dead Light and for me this is what sets Fellwarden apart from Fen. It is distinctly more black metal in sound, rougher round the edges with what feels like a warm saturation from a tape machine, which really brings out the more atmospheric elements whilst giving the guitars an extra bite of fuzz. The kick drum has a thunderous quality that rumbles and cracks underneath all the songs, driving the earthy rhythms forward with devastating efficiency. The snare seems like it could use a bit more snap as its lost a little in the mix for me. Whilst the toms echo through the mix and the cymbals cut through with a glimmering effect. The rhythm guitar tones sound thick but also very valve-y and warm. The mid-range and high frequencies cut through crystal clear as the low end supports the melodies and filling the space underneath them. Overall the mix sounds very old school and I love it, capturing all I love about a fuzzy atmospheric mix.

This album was breathtaking experience for me, and full credit to Fellwarden for delivering probably one of my favourite atmospheric releases of the year. Knowing how The Watcher is inspired by the environment around him, you can really hear it in this album. So, if you fancy walking the Fells with a trusted Warden, Wreathed In Mourncloud is the album for you!