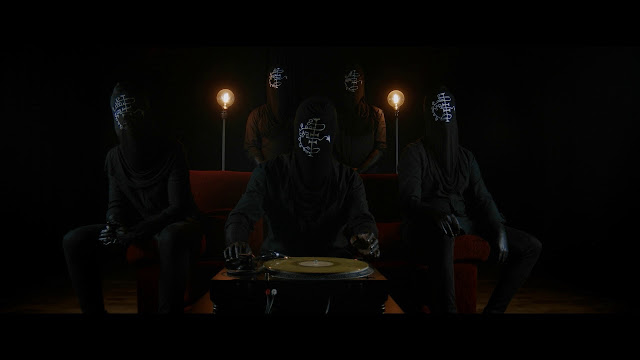 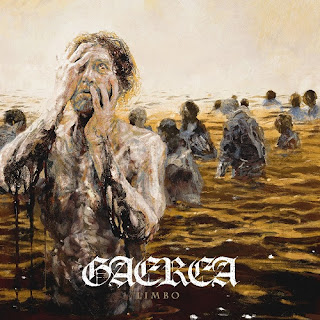 The band members and their roles are kept anonymous.

The dark and anonymous artists that collectively call themselves Gaerea have once again walked out of the shadows shrouded in mystery, unleashing their Limbo into the world with malicious intent. A discordant cacophony made itself heard when I first tuned into Limbo, I've known about Gaerea for some time and thoroughly enjoyed their previous album 2018's Unsettling Whispers. The brutal and unrelenting sound that the quintet possess is straight from the depths of darkness. Tortured and moulded by the shadows, Limbo will certainly give you the imaged of yourself wandering around aimlessly in purgatory. With weighty riffs and an unrelenting aggression, this album is not to be missed!

Musically, the first thing that stands out to me is the huge, slow and pounding riffs in the first song To Ain. The eleven minute epic has a lot to unpack and process but ultimately it is eleven minutes of pure force and riffs. Whilst there is a dynamic shift in the middle sections to add contrast, the groove filled riff that follows it is instantly memorable to me, and you can lock into it when you headbang solo in your room. As an album opener To Ain sets the tone for the spiralling chaos that is to follow. Another thing that strikes me straight away, is the original Batushka style choral vocals that sit below the chaos unfolding above them. As the vocals are in a low register it is quite striking when you hear them as the whole song gets a boost in the more dynamic and quieter sections. They add this extra layer that helps the songs close in around you and unleash their darkness into your mind. I really enjoyed the tortured sounding vocals in Null, for me it felt like they embodied the song's title about feeling nothing and existing in emptiness. The imagery created by the music is very dark but also intriguing for me, coming from a tortured place but the choral vocals suggest some persecution and mockery of a higher being. It is a hard one to pin point as each song is seething with emotion and rage, which is something I've really enjoyed about this album as you aren't allowed to breathe for one second, it is an intense, fever dream of a nightmare from start to finish.  Conspiranoia I think is my highlight of the album, the tension continues to build in the introduction so that you are disorientated, waiting for it to eventually drop in and summon your demise. With this in mind, it also creates this amazing atmosphere so when it does pay off with the introduction of the deep choral vocals your lost in this mystic and chaotic scene. The bands lyrical themes of misanthropy and self-destruction really come through in the songs, the lyrics are delivered with such venom that you are inclined to feel the pain that they anonymous vocalist has gone through. Overall, the album is intense and dark, capturing real pain and sorrow in a dark, foreboding and at times intimidating atmosphere created by heavy, evil, shadow filled riffs. Fifty one minutes of uncompromising black metal.

The production is nothing short of phenomenally brutal. Capturing the rawness of black metal but in a more polished and restricted way. The overall mix sounds very closed in and claustrophobic, which adds to the intensity of the music. The drums are merciless, with a kick that wakes giants from a thousand year slumber accompanied by a shotgun snare that echoes in your ears long after the initial strike of the stick with cymbals cutting through the chaos like knives. The bass fills the low end with a biting, distorted growl and the rhythm guitar tones are chunky and sit comfortably in the mid range, give the lead tones the ability to cut through like razors. The lead tones stand out to me for their clarity and sharpness, laying their haunting melodies over tumultuous chords offers a definite contrast whilst adding to the overall despair of the songs. The layering of the deep choral vocals is also something I enjoyed, as it added this extra dynamic to the songs and filled any space, yet allowed the songs to breathe because of their subtlety in the background. Overall, this mix will resonate in my skull for a few days, that is for certain! A heavy and dark mix that helps accentuate the songs in the best way possible.

Gaerea are one of the finest Portuguese black metal bands on the scene, with a brutal and relentless sound. If you fancy delving into your own Limbo then get this album in your ears!