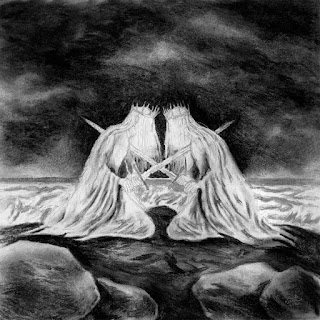 
Before I say anything, it is not often to I get absolute chills from an album from start to finish, Havukruunu have absolutely blindsided me with the sheer size and power of this album and I simply cannot get enough! Bringing forward the brutal aggression and the relentless speed of their previous albums, Uinuos Syömein Sota sees the band expanding on these elements to make a truly triumphant and epically melodic release that has resonated with me to my very core! Capturing various atmospheres and soundscapes to create a rich tapestry of storytelling in a highly immersive environment. Havukruunu are soon to make you instant fans when you listen to Uinuos Syömein Sota.


Musically, this album has absolutely everything for me; riffs, speed, melody, massive chanted vocals and sprawling soundscapes. It is hard to pin point an exact place to start as the album is a plethora of elements coming together in a devastatingly perfect manner. The thing that grabbed me instantly was the backing vocals, huge, full and powerful chants that can be heard throughout the album. They make the album sound as if it is being performed in the middle of a mountainous valley, with the perfect acoustics. It makes me imagine a great eagle soaring over a triumphant battlefield that has been blessed by the Old Gods, and such is their power that every time they come in I get chills all down my neck and my adrenaline pumps. When these vocals are given their own shining moment on the highly atmospheric interlude Jumalten Hämär, it cements their purpose on the record in ominous glory. The rhythmic riffs throughout the album are fast and unrelenting, but also drive home this newer emphasis on melody that the band have from my perception. With this in mind, the leads can ring out triumphantly over the top of these cavernous and thunderous rhythms to create this epic atmosphere that overwhelms and envelops you. I'm also blown away by the virtuosity of the band, guitar wise the solos are epic, but also tasteful and really compliment the music, evolving with the song. Basically, they aren't solos for solos sake. I've often found this with the melodies as well, I get a very strong Winterfylleth vibe in the way that they have been worked into the songs with an atmosphere in mind.  Uinuos Syömein Sota's album closer is one for the ages, consolidating everything that has been done throughout the album and the result is eight and a half epic showcasing all the best parts, in the form of Tähti-yö Ja Hevoiset. Packed full of atmosphere and soaring riffs, your adrenaline serges before being entranced with the ebb and flow of the quieter sections before being slowly brought back to Earth with the gentle swelling and pulsing of its outro. Overall, this album is stunning, well written and captivating from start to finish, I had to have a cup of coffee after listening to it because I was so emotionally shaken by the album. It is true what I say, this album gave me chills from start to finish.

The production retains a lot of black metal fervour, but in the case of Uinuos Syömein Sota it is cleaner sounding than previous records 2015's Havulinnaan and 2017's Kelle Surut Soi. Yet it still retains the band's overall sound and aggression and doesn't lose that raw power that the band possess, if anything the slightly cleaner production enhances it! The drums sound huge and cavernous, the kick drum raining pure devastation upon you, with a solid click to thump ratio. The snare seems a bit lost in all the chaos, personally I'd have preferred more snap but for it's purpose it cuts through just enough. The cymbals have a weird splash timbre to them that I really like. Alongside all the auxiliary percussion it makes for intriguing listening. The rhythm guitar tones, fit the black metal mould but are clearer and slightly brighter but fill the mid range, so that the lead tones can wail and screech upon their solid foundation. The lead tones sound surprisingly warm and full in my opinion, possibly a neck pick up exclusive sound, which compliments the colder sounding rhythm tones. The layered vocals are panned and mixed exquisitely, not much more I can say on that. Overall the album is produced incredibly well, retaining all that we love about black metal but Havukruunu have also expanded  it in their own unique way.

This album scintillates and captivates the imagination, whilst getting the adrenaline pumping through your veins. I have absolutely loved this album from start to finish and I want more! If you fancy listening to some of Finland's best, get listening to Uinuos Syömein Sota!