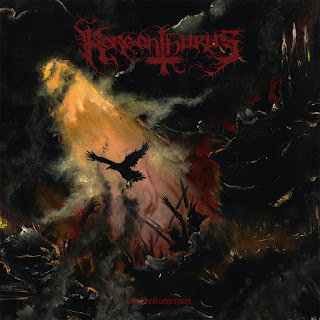 
Appearing through the cold, bleak blackness of Finland, Korgonthurus bring the thunder and shadows with a black metal masterclass going by the name of Kuolleestasyntynyt. I am a relatively new fan of the band, and from what I have heard today, I will remain a fan. Combining all the best bits of black metal and injecting them with raw, unadulterated evil and malice. Whilst the band has had an on/off status over the years, from what I've heard it has never compromised the bands sound, only developed it further each time round. As a result of the persistence of founding members Corvus and Kryth, Kuolleestasyntynyt is a bonafide rager of an album that is sure to delight and enchant you with it's aggression and intimidating presence.

Musically, it encapsulates all the traditional black metal genre markers, but with a more modern and aggressive twist. The opening riff for Syyttäjäenkeli caught me particularly off guard with it's groove laden rhythmic beatdown. The overall sound and riff composition reminds me a lot of Gorgoroth's 2015 release Instinctus Bestialis but with much more aggression and power. The pace of the album is blisteringly fast and is a vase of blink and you'll miss it, but what the band have managed to pack into thirty eight minutes of music is nothing short of impressive in my opinion. Whilst the riffs certainly pack a punch, the chaotic atmosphere that the listener becomes embroiled in makes the album artwork seem all the more powerful and important. The visuals put you firmly in the place of the lone bird, surveying the destruction that has been laid out across the land. The music backs this up as it has a very dark and doom filled atmosphere, and with some of the more mournful, slower sections adding to it's dynamic contrasts it creates a disturbingly beautiful image in the imagination. The more rhythmic riffs are quite chunky for your usual black metal rhythms, and I think they sometimes crossover to a more doom/death metal influence. With that in mind, the more prog like section in the middle of the album closer, the nine minute epic that is Nox, demonstrates the versatility of the band on this record, even more so than I have heard before on previous records (2016's Vuohen Siunaus is still a stand out and amazing album though!). With this plethora of different styles demonstrating their songwriting style, underpinned by discordance and rage, Kuolleestasyntynyt presents an incredibly diverse listening experience. Overall, the album is fast, brutal and has lashings of raw, unadulterated power behind it. The versatility is something to be admired as the band have really thought outside the box to create a unique listening experience.


The production is my personal highlight, compared 2016's Vuohen Siunaus, Kuolleestasyntynyt is a much fuller and thicker album. A lot more attention has been given to the mid range and low end frequencies, which brings it directly inline with modern black metal production. The kick drum is thick and heavy and helps drive the riffs forward with devastating efficiency, whilst the snare snaps through. The cymbals are quite clear and ring through the mix, filling the high end with sharp glimmers of sound. The rhythm tones are the stand out for me, especially with the heavier riffs in title track Kuolleestasyntynyt and Syyttäjäenkeli. The have a bass-y lower mid range tone to them that just resonates with me. When the slightly lighter, and sharper lead tones sound over the top they seem to cut through a lot sharper than I expected. With the production being  slightly cleaner yet still containing the raw black metal power that the band possesses it truly is an explosive experience. When the slower more progressive sections of Nox come in there is a very precise mix and all the cleaner tones are equally balanced to emphasise the dynamic shift in the song, which I found quite clever. Overall, an explosive mix that helps accentuate the songs to their maximum potential.

If you fancy dome dark and explosive black metal, then I thoroughly recommend filling your ears with the relentless Kuolleestasyntynyt!