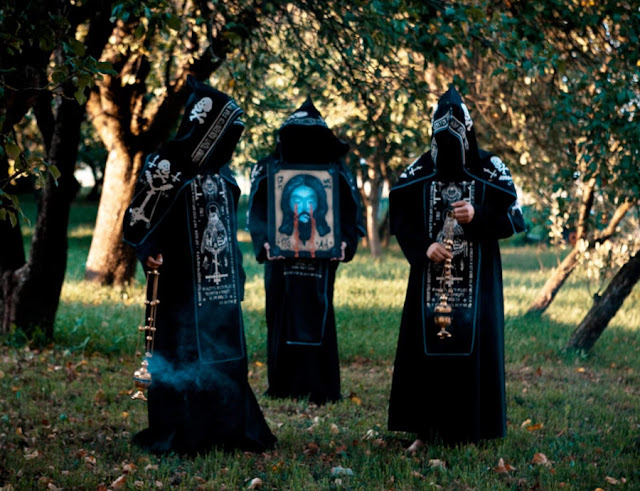 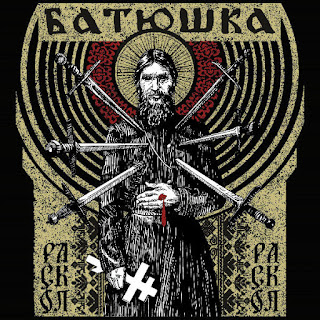 Now we all know the drill when it comes to Batushka, a band that has so much drama behind it still somewhat ongoing. You can check my thoughts out on that all in my previous reviews of the band(s) here (or delve in the archives), so I don't have to regurgitate it. I will say though I'm not the type to call one Faketushka and all that stuff, but this particular musical effort does come from the widely called Faketushka. Whilst I have some level of respect for the music on both sides music, I am aware this is a controversial subject for some people. I'll always feel conflicted either way as I enjoy the music to some extents, in a way I guess that is all that matters. Anyway, whilst all that is going on, we have a Rasputin covered EP to review.

Musically, summed up in one word is meh, it does seem to be one more bite of the cherry for Bart and his cohort to hold on to something that isn't originally theirs. Whilst there are some moments of grandeur, the album does seem to be a continuation of 2019's Hospodi, similar concepts and ideas being recycled, or that is what it seems like to me. I don't not like it but at the same time I'm not amazed by it. I still think the sound of the Eastern Orthodoxical style choral vocals is still very unique in the black metal scene as I don't really hear much, if any of that style outside of Batushka. I guess in some ways it sounds very safe, there doesn't seem to be a push towards anything new conceptually, in other words it is a very safe sounding EP. Despite this, there is some good atmospheres that are built throughout the album, and the imagery of a dimly lit, empty Eastern Orthodox church being the theatre for this worship of a dark and mystical liturgy. I still enjoy Batushka's more melodic style of riff, whilst they're very good at the traditional black metal fast sections, the way they lock in the guitar riffs with the choral elements still elevates the songs for me. With this in mind, the choral melodies seem slightly varied form Raskol's 2019 predecessor Hospodi, but this disappointingly for me only seem to appear in the last two tracks. Even so, with everything going on, I still subjectively enjoy Batushka's music, and it does still have this uniquely captivating element to it, but I feel I have to remain objective while reviewing them unfortunately. However, there is definitely more dirge sounding sections throughout this album, invoking an image of some sacred destruction in one form or another. The image of Rasputin is a controversial one when basing your themes off of Eastern Orthodoxy, but I like that. The character and the man Rasputin has always fascinated me, so to his likeness with multiple stab wounds in his body is an interesting image for me. With this imagery as a backdrop for some crushing and heavy riffs you can feel this dark and evil grandeur pressing down on your shoulders. I still think some elements sound a bit like they've reinvented the wheel, but overall the EP feels like an extension of Hospodi, a narrative continuation so to speak.

The production feels rough and raw, and gritty, which is a positive. I love the thickness of the guitar tones, they have a great low end weight to them that you can feel with every hit of the lower strings. The lead tones, seemingly blend in to the choral melodies, whilst floating on top of the crushing rhythm tones. The choral vocal mixing is something Batushka know how to do and do well, in many parts of the EP I found myself enveloped by the dark grandeur of these multiple layered voices as they closed in around me. The kick is thunderous and drives the song along with the fuzzy bass tone underneath the guitars. The snare could use a little more snap for me, it sounds quite dull and blunted in my opinion, I think a sharper snare sound would really help the rhythms stand out more amongst all the guitars and chorals. Overall the mix sounds huge from start to finish and drags you into this dark and twisted church for a most profane ritual, and you can't not enjoy that.

The album has a few ups and downs for me, but I guess, contradictorily to my opinion it is a consistent effort from one side of the Batushka battle. So, if you fancy a dose of black metal Eastern Orthodoxy, then get Raskol in your ears!