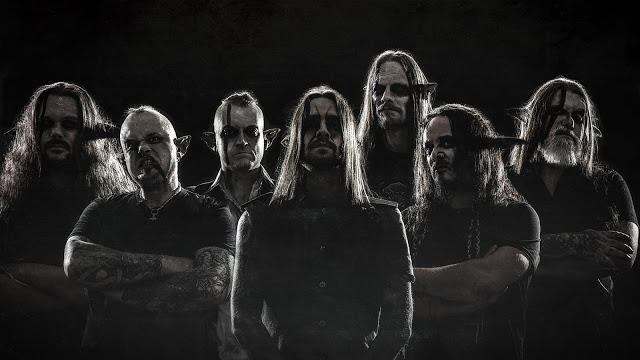 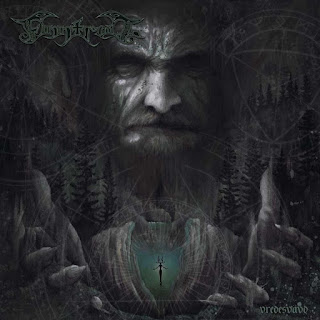 Fintroll - Mask
Review
Rating (out of 5🤘): 🤘🤘🤘🤘
Favourite Track(s): Ormfolk, Att Döda Med En Sten, Forsen, Mask, Vid Häxans Härd, Grenars Väg
The Finnish Trolls reveal themselves once again and present to us unsuspecting folk a brand new album of blackened folk metal fury! One fact that I have always found intriguing about Finntroll is that, despite coming from Finland, the original vocalist of the band Katla is Fenno-Swedish (the Swedish speaking minority in Finland) chose to write the band's lyrics in Swedish as it better suited the "trollish" image. Despite multiple vocalist changes, the tradition has continued, which I think is awesome. I remember seeing Finntroll at Hard Rock Hell: Vikings and was blown away by their music and stage presence. Their brand of blackened folk metal is unlike one I've heard and stood out to me instantly. As a result Vredesvävd has been an eagerly anticipated release for me!
The album opens with a grand Howard Shore style, Lord Of The Rings orchestral movement, that I really love as it sets the scene effectively, immersing you straight away into a magical and mystical Trollish world. From start to finish Vredesvävd is an energetic, and frantic album that has a plethora of elements all compacted into fast, furious and jaunty songs. What stands out the most is the variety of folky synths and instruments making themselves ever present with dance worth folk and oompah rhythms. Even with this in mind, the band are also playing with black metal influenced riffs, so there is an overarching eeriness and underlying sinister intent. One thing that's always intrigued me about Finntroll is this seemingly effortless ability to craft catchy folk melodies amongst some dark and brutal black metal riffs, from my perspective it's not that dissimilar to Emperor's legendary In The Nightside Eclipse. The song that sums that up for me is the longest song on the album Ylaren. An epic track with driving waltz riffs with a grand and sinister synth behind it accompanied by a chorus of ominous voices.  My imagination definitely conjures up great Troll battles and epic landscapes of mountains, great rivers and endless woodland as well as deep, dark caves full of creatures, treasures and beasts. The folky melodies are what really makes this album for me, no doubt that some of them will be stuck in my head, but the overarching mega-folky hooks that you get in the likes of Korpiklaani or Turisas aren't quite there, with the exception of Grenars Väg and it's "Hey!" chants. However, given that this is blackened folk, I don't entirely think that a massive, cheesy hook is what the band is going for. There is definitely more of an emphasis on atmosphere, and it comes in spades, which I enjoy. The only downside though is all the songs seem to bleed into one, and because it is such a fast and energetic album, with only brief passages of varying dynamic, ear fatigue can creep in on occasion. This doesn't dampen my enjoyment however, this is a weirdly fun yet oddly sinister album that keeps you moving in this Troll kingdom. Overall, it is definitely blackened folk, and it is done very well and I would even be bold enough to say that Grenars Väg is on par with Fintroll's magnum opus Trollhammaren!
The production is as grand as you'd expect, going by the orchestral cinematic piece, Väktaren, at the beginning of the album. With layers of synths and orchestral elements, this is the first thing that stands out to me as it makes the album sound cavernous. I know this transitions well live, and it is fair to say that the production crew have captured the frantic and chaotic energy of a Finntroll live show. I really love how the guitar tones are thick and chunky, even the leads feel like they have a thickness to them! With the raw distortion being contrasted by the clean sounding synth and orchestra it offers up an interesting blend that actually works really well. The bass is rooted deep in the depths of the low end, which I think reinforces the chunkiness of the guitars. The kick pounds like a hammer into the cavernous chaos as the snare snarls and snaps through the mix. The cymbals take a bit of a back seat volume wise from my perspective and add a glimmering effect underneath the synths in the slower riffs but smash through in the faster sections. Overall, it is an epic mix that sounds grand and contradictorily raw yet full of relentless energy!
If you fancy journeying into the land of Finntroll, with grand melody and epic black metal riffs, get listening to Vredesvävd!
Finntroll - Vredesvävd
Album Reviews