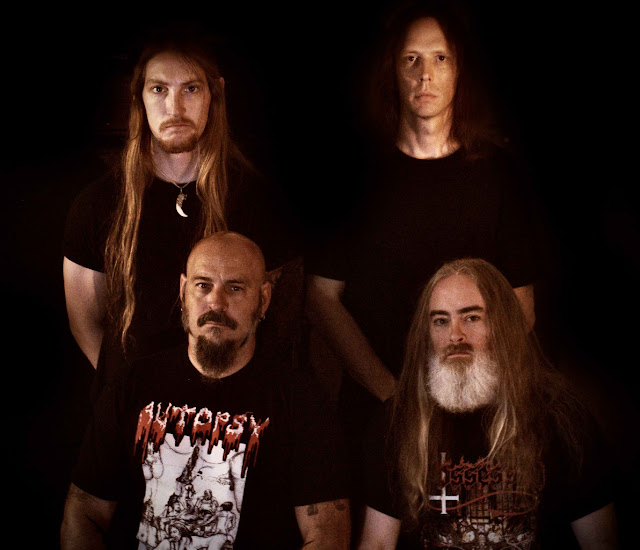 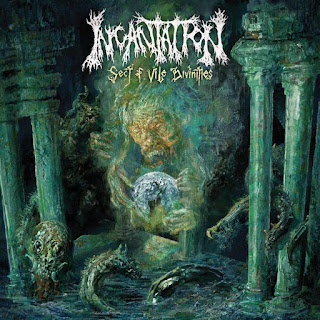 Country: 🇺🇸
Genre: Death Metal
Release Date: 21st August 2020
Record Label(s): Relapse Records
Band Members
Sonny Lombardozzi - Guitars
John McEntee - Guitars, Vocals
Kyle Severn - Drums
Chuck Sherwood - Bass
Incantation - Entrails Of The Hag Queen
Review
Rating (out of 5🤘): 🤘🤘🤘🤘.5
Favourite Track(s): Ritual Impurity (Seven Of The Sky Is One), Entrails Of The Hag Queen, Black Fathom's Fire, Guardians Of The Primeval, Chant Of The Formless Dead, Scribes Of The Stygian, Unborn Ambrosia, Siege Hive
American death metal legends are back with skull crushing new album Sect Of Vile Divinities! Flexing 31 years of riff writing experience into a brutally complete and devastating album, that has me picking my grey matter up off the floor...again (note to self: stop listening to skull busting albums perhaps? Nah, not going to happen!). From it's opening Ritual Impurity, you are truly initiated into an evil and chaotic service with destructive growls barking the sermon of devastation! Building on the seething venom that is 2017's Profane Nexus, Sect Of Vile Divinities is a one way ticket to the apocalypse.
Musically, in the simplest possible terms, it is a solid combination of death metal with slower doom like sections. This however, creates a very apocalyptic, end of days, atmosphere throughout the album. The slower, beefier riffs are what really stand out to me, as they throw you into this war like march ready to ensure that chaos prevails. This song format has become an Incantation staple, as elements from the bands last three releases (2012's Vanquish in Vengeance, 2014's Dirges of Elysium and 2017's Profane Nexus) all combine to make this a heavy, boot stomping album that shows no mercy. I really enjoy the slower, doom-ier sections of the album as they offered a good contrast to the fast paced, flash in the pan death metal sections. This allowed the band to really pay attention to some more melodic parts of their songwriting, which is predominately in the slower sections. One of my favourite examples of this is towards the end of Black Fathom's Fire, where the band almost take the song on a funeral march to it's conclusion, but the sweeping melodic runs that sit underneath the heavy riffs creates an intense atmosphere in a really unique way, which ultimately carries over into Ignis Fatuus. The two minute interlude dirge, sets you up ready for the unfolding chaos in Chant Of The Formless Dead, which from my perspective crosses over into grindcore in some areas. To me there is a real conceptual presence throughout the album, it almost feels like a soundtrack to a dungeon crawler, where you have to kill off multiple demonic foes and deranged cult worshippers with a chainsaw. One of the more unique parts of the album that really stood out to me was the intro harmonised riff to Scribes Of The Stygian. The riff and its harmony almost hypnotise you into a trance before launching you into the blasting riff that brings in the rest of the song. The album comes across as subtle and versatile and with multiple contrasting sections and dynamic shifts, Incantation have definitely kept the listener intrigued as to what will happen next. There seems to be a lot of influence from outside death metal, mainly from doom and possibly prog (but only slightly), to create this rather dark and imposing atmosphere whilst being skull crushingly slow and heavy. Overall, Sect Of Vile Divinities has a lot of mysteries that I am yet to uncover, but will do over multiple listens. I love the slower take on death metal in this album too, something I've not heard or championed for a while!
From a production standpoint, the album sounds raw and grizzly. The rhythm/main riff guitar tones are what stand out to me the most, as they cut through like chainsaws but they have a really deep thickness to them in the low end but a super clear high end, which offers a good sonic variance when it comes to the contrasting compositional sections. The lead tones, are sharp and super clean which makes the dive-bombs sound more dramatic over the thicker, guttural rhythm tones. The drums sound tight and precise, everything feels like it's been captured perfectly. The kick has a solid thump that permeates through the whole album, with a tiny bit of click giving it an edge, accompanied my a snare that sounds like a crocodiles jaw snapping at full strength. The cymbals crash through the chaos with absolute clarity, and I can hear every subtle bell hit and stick tap. The bass is one of my favourite parts though as it doesn't fill the stereotypical mould of a muddy, swamp like tone that some death metal bands go for. It resonates in the low end very clearly, and all the subtitles of a well dialled in tone can be heard. Overall a brilliantly mixed album that captures the relentless force, energy and atmosphere of the compositions.
If you fancy some hard hitting, ball busting riffs today, whilst being initiated into the chaotic sect,  then I full recommend giving Sect Of Vile Divinities a spin!
Incantation - Sect Of Vile Divinities
Album Reviews