Napalm Death -Throes Of Joy In The Jaws Of Defeatism 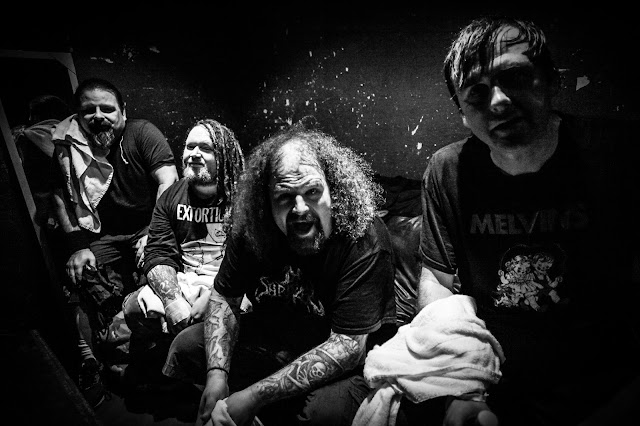 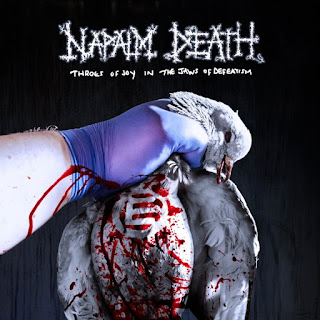 Napalm Death - A Belly Full Of Salt And Spleen

Review
Rating (Out of 5🤘): 🤘🤘🤘🤘🤘
Favourite Track(s): A Belly Full Of Salt And Spleen, Amoral, Fuck The Factoid, Backlash Just Because, Joie De Ne Pas Vivre, Fluxing Of The Muscle, Throes Of Joy In The Jaws Of Defeatism
Legendary English Grindcore godfathers Napalm Death have graced us with another brutally uncompromising album that will have you moshing around your room completely disrespecting your surroundings. Whilst Throes Of Joy In The Jaws of Defeatism still retains a lot of the Grindcore hallmarks that made the band famous, there is an obscure and abstract angle to this album that branches more into death metal. These elements are carrying on from 2015's Apex Predator - Easy Meat, but further evolving the sound into a more unique entity. I think this is Napalm Death's most versatile album to date.
Musically, at its core the album is still very firmly gripped in the hands of Grindcore; brash, raw and ruthless. The main stand out being that the songs are longer than anything that we've heard from 1987's Scum to 1992's Fear Emptiness Despair (with the exception of 1990's Harmony Corruption). Throes Of Joy In The Jaws of Defeatism is an ambitious and boundary pushing album, something more than grindcore, death metal, hardcore and punk. An eclectic mix of styles make themselves known on this album, giving is a very industrial and experimental feel. Even with this in mind, it hasn't halted the blistering pace that the band do things at, combining the ear-splitting noise with some melodic intervals and a progressive song structure. One thing that I love about Napalm Death is they don't give a fuck what you think and will gladly flip the script regardless, the stand out song that does this for me is Amoral. Its weird industrial intro and groove stands out amongst the chaotic monster tunes on the rest of the album, with its almost dystopian melody not really fitting into a traditional mood, the melancholic tones carry a sense of sadness and despair. In some cases this album showcases the overwhelming power of diversity and how the band have been the most reputable ambassadors for extreme music, embodying the very essence of musical evolution on the fringes to make it even more extreme but in unexpected ways. Whilst political and social issues are at the heart of Napalm Death's music, it will be no surprise that symbolism, metaphor and oxymoron are present on Throes Of Joy In The Jaws Of Defeatism. Even the album cover has a deeply conceptual meaning; "The dove, symbol of hope, being violently crushed by a sterile hand is a metaphor for a dehumanized society and its discrimination against "others", be they migrants or whether they have a different type of sexuality, for example. However, despite such oppression, we can still see a symbol of equality in the center of the dove, meaning that even after such cruelty we can still glimpse something positive in the end, as expressed by the oxymoron in the album's title - "the celebration of humanity even in the mangling jaws of negativity" (Alves, 2020). The album itself effortlessly flows with contrasts and musical diversity, yet doesn't lose any of its freshness or experimentalism. The creative synergy between the band is second to none and the fact that there is so much packed into this album creatively, it is nothing short of phenomenal. There is something for everyone in this album, I believe that there will be at least one song on this album that some one connects with, because this album is very much an album for the current time. Championing diversity above all else. Overall, the album is texturally and conceptually rich, no words can describe the multitude of layers and creativity behind it. Even after 30 years the band continues to display an overwhelming reverence and relevance. Considering all that is going on in the world, I think it would be a wise choice to heed this album.
Considering the experimentalism of the songs, it is only fitting that the production is the same to match the energy. Whilst the guitars, drums and bass, for the most part are fitted with the traditional death metal/grindcore production thick tones and pounding drums, there is an aspect to it that I can't quite put my finger on. Maybe it has more of a punk/hardcore edge to it, as the guitars are not overly distorted but have the warmth of an overdrive about them. The bass follows a similar template of being chunky and overdriven but for the most parts sharp and clear. As a whole though, the album has a surprising amount of space considering the amount of musical chaos going on. Either way, it is unlike anything I've heard this year and has stunted my speech because from my perspective it is pretty much perfection!
If you fancy delving into this highly experimental, richly conceptual and socially current album, I recommend it whole heartedly and I implore that you listen to it a few times to let it sink in. A phenomenal album from the Birmingham legends.
Napalm Death -Throes Of Joy In The Jaws of Defeatism
References
Alves. F., a.k.a. The Notrap, (19th September 2020), Napalm Death - Throes Of Joy In The Jaws Of Defeatism, Sputnikmusic.com, https://www.sputnikmusic.com/review/82068/Napalm-Death-Throes-of-Joy-in-the-Jaws-of-Defeatism/
Album Reviews