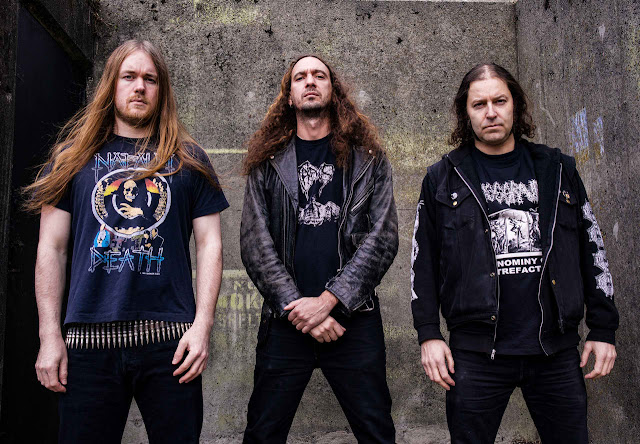 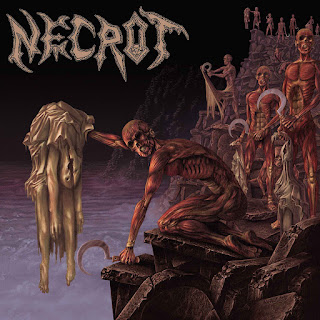 Review
Rating (Out of 5🤘): 🤘🤘🤘🤘.5
Favourite Track(s): Your Hell, Stench Of Decay, Asleep Forever, Sinister Will, Mortal
The first thing that comes to mind when I see the album cover for Mortal, is Cannibal Corpse's Shedding My Human Skin. With that in mind, I don't think I'd be that far off to say that the might Cannibal were an influence on the subjects of this review, Necrot. However, we're not here to talk about influences! Mortal is a ball busting, rib crushing, skull destroying album that is sure to fulfil all your death metal needs. Having listened to the series of singles leading up to the album (Your Hell, Stench Of Decay and Asleep Forever), I jumped on that hype train hard (also because I loved 2017's Blood Offerings)! From start to finish the listener is treated with big riffs and solid death metal grooves.
Musically, for me it is instantly more refined than 2017's Blood Offerings, as bombastic as that album is, Mortal has an air of dark sophistication about it. Which is quite something considering the album's length is just shy of forty minutes, which in some cases means "blink and you'll miss it". The riffs come at you at a significant pace of knots but there is no lack of groove, which is what really draws me in as it underpins the whole album. I might be wrong, but in some of the slower sections throughout the album, I get a really strong blackened death metal vibe because of how the riffs and drum rhythms work. With this in mind, it offers a great contrast to the more traditional, blast beat stuffed death metal sections and shows me that the band have evolved their sound. I say evolved as there is more of a melodic element that can be heard in the lead passages throughout the album, which is something I heard glimpses off on Blood Offerings but not to the same degree. This more melodic, black metal sounding influence gives the album a very sinister atmosphere from my perspective. Channelling the evil and cold and finely blending it with death metal carnage is always a good mix in my book! I think Necrot have hit a really awesome balance between being fast and slowing it down. The faster sections and songs have so much more impact for me after a slow chugging riff a section or song before, definitely keeps you on your toes and headbanging that's for sure. One of the more trivial things that I like about this album is the artwork, compared to the album artwork for Blood Offerings, it looks like the central character has annoyed or angered his cult leader and as a result is now being sacrificed to their chosen deity in the most painful way possible. A pretty brutal imagined narrative on my part really, being forced to de-skin yourself for the dark lord sounds horrific but all for the greater cause I suppose. In essence it captures this apocalyptic imagery in the lyrics perfectly for me and visually aids the doom ridden environment that the music creates. The album closer, Mortal, is eight and a half minutes of pure death metal fury that closes the album with devastating impact, I cannot put into words how my ear drums survived a riff battery assault for as long as that. Overall, Necrot have demonstrated once again how much of a ruthless riff machine they are with this amazing sophomore effort.
The production is huge on Mortal, a real juggernaut of a mix unleashes itself on your ear drums with blistering pace. The rhythm guitar tones are thick and heavy, with contradictory valve like warmth to them in the mid and low frequency ranges. The lead tones, when they are employed, screech through the mix with the upmost clarity, I really like the subtle reverb used too, as it creates a grand space around the lead parts. The kick is a pounding war drum, but the snare sounds a little dulled in areas, I would have personally preferred a bit more snap and reverb from the snare to really hammer home those grooves. However in the grand scheme of things, it is a minor inconvenience really. The cymbals cut through brightly, and almost glimmer long after they've been hit. Overall, the album sounds huge in all it's death metal grandeur.
If you fancy questioning your mortality today, give Necrot's new album a spin!
Necrot - Mortal
Album Reviews