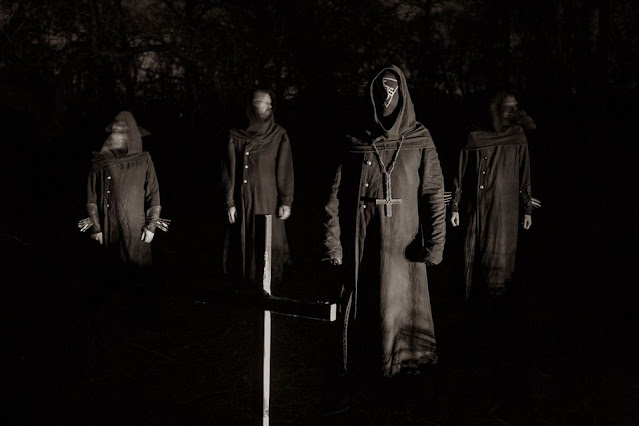 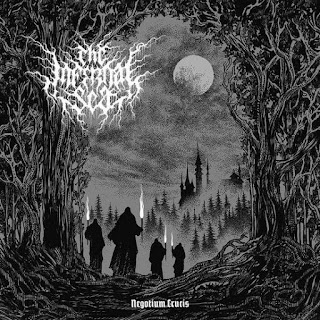 Review
Rating (out of 5🤘): 🤘🤘🤘🤘🤘
Favourite Track(s): Negotium Crucis, God Wills It, Befallen Order, Devoid Of Fear, Unholy Crusade, Rex Mundi, Into The Unknown
Easily one of my favourite English black metal bands, from the music to the imagery, these plague doctor mask wearing gentlemen are a forced to be reckoned with! Having seen the band live for the first time at Hard Rock Hell: Vikings II last year (damn I miss gigs!) I was blown away by the theatrics and the sheer unflinching, dominating sound. I am a massive fan of their first album 2016's The Great Mortality, as a result I have been eagerly anticipating  this album for some time! Packing a very stark and harrowing Medieval concept alongside a unrelenting rawness into their music The Infernal Sea is definitely something to behold in all its infinite darkness.
The first thing that I really love about this album is the Medieval theme, building on the themes laid out for us in 2016's The Great Mortality, there is a real darkness and haunting aspect into looking into human nature during a pandemic, in this case 1348's Black Death. I think this is the main aspect that resonates with me now, given that the world is in a pandemic and still humans will punish and crush one another to gain capital, which leads in to Negotium Crucis's themes of depravity, corruption and deceit through the eyes of the Knights Templar and the crusades. Although genocide is also a lyrical theme, I do feel like this echoes today's very real semi-genocide of the poorer populations through the pandemic. It's horrific to believe that the medieval and the modern have echoed each other throughout this album's lyrics and this conceptual richness forces to think and re-affirm your belief in the sadistic nature of the human race. Underneath this incredibly dense conceptual theme, is the raw and uncompromising black metal riffs that I love about this band. There is a very Black 'N Roll groove to some of the riffs that I really enjoy, you can feel yourself moving to their rhythm and becoming enveloped in the surrounding bleakness. Accompanied by the usual 6/8 traditional black metal grooves found in the likes of Mayhem and Darkthrone, there is a unique amalgamation of traditional and modern black metal, which makes this album really versatile in my opinion. The best example of this is in God Wills It, a grim and dark song that captures a harrowing and horrific atmosphere that will remind you of those Norwegian godfathers but with a distinctly British blackness. My imagination conjures up a very dark and bleak England listening to this album, infested with various diseases and unmerciful cruelty from those above. Negotium Crucis is probably one of the more outright black metal albums I've listened to recently but there is still some experimentation in there, with the cleaner sung vocals in the first few tracks making appearances through out the album giving it some extra texture. With those contrasts it keeps the album fresh and gives it a sense of transitioning into  different parts of the concept, which is something I enjoy as it makes the stories being told have a distinct structure. However, the most haunting part of the album for me appears on Field Of The Burned, where a Burzum like, high pitched, wailing scream can be heard that send chills down my spine. The atmosphere throughout the album is dark and oppressive, accompanied by a real sense of fear and a surge of adrenaline, this album was a rollercoaster of emotions all packed into a delimitated, infested box that can become a personal hell, not many albums make me feel like that in a good way! Album closer Rex Mundi, is a soul claiming, brutal, combination of everything heard on the album condensed into one skull splitting closer. One thing I love about this song, is it's feel of finality, the feeling of being caught by this disease or caught up in debaucherous heresy to then go on to be tortured. The riffs are raw and savage, it's just a phenomenal black metal song. Overall, this is a deeply rich and chaotic album, that comforts you with the evil realities of the blackness of the human nature.
The production is phenomenal, comparing it to that sound that they have live on stage there isn't much disparity between the two. The energy of that live experience has been captured perfectly and give it a real inches away from your face feel. There is a heavy thump to the kick drum that helps drive the grooves and rhythms, the snare snaps through the mix with devastating effect. Whilst the cymbals smash and crash their way with a sharp, knife edge sound as well as a disturbing and sinister glimmer. The guitar tones are super raw, which is not something that I've heard in a while. Sounding like a chainsaw, the tone has very good mid to high frequency balance to create that grating and raw sound we all know and love in black metal. The bass fills the low end, but not wholly, which is refreshing as it adds to the chaotic noise with its own mid range distortion. This is surprising as it means the album has space to breathe, I haven't heard a lot of that recently. With this in mind it allows the vocals to sit on top of the chaos without being suffocated with distortion all around it. Overall, an expertly crafted mix that pays homage to traditional black metal production but with a modern professionalism.
I think it is fair to say that this will be a prominent album for me when it comes to choosing the best for the year. So, if you fancy some dark and harrowing British Black Metal, spin Negotium Crucis now! Plague masks recommended for maximum immersion.
The Infernal Sea - Negotium Crucis
Album Reviews