Antzaat - For You Men Who Gaze Into The Sun 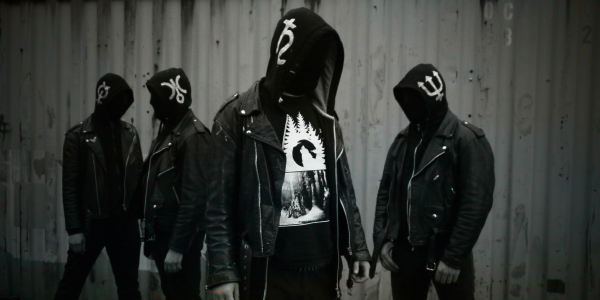 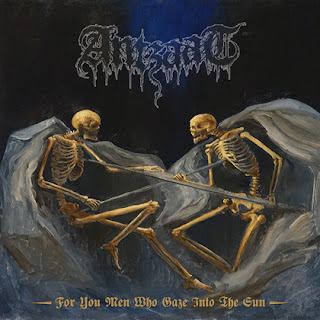 Country: 🇧🇪
Genre: Black Metal
Release Date: 30th October 2020
Record Label(s): Immortal Frost Productions
Band Members
Isaroth - Bass
Eenzaat - Drums
Ronarg - Vocals, Guitars
Nihil - Guitars
Antzaat - Veil Of Darkness
Review
Rating (out of 5🤘): 🤘🤘🤘🤘.5
Favourite Track(s): Between The Beginning And The End, Through The Eyes Of A Rotten Mind, Radiant Fire, Veil Of Darkness, Man Made Flesh Made God Machine, Crown Of Concrete
A band that has burst onto my radar seemingly out of nowhere and ready to tear it up with a ruthless brand of Belgian black metal! With an intriguing name, which is actually Dutch for being against something, this mysterious band has a deeply atmospheric style with punishingly weighty riffs. The band have only been in existence since 2015 and have made a mark on the scene with 2017's scintillating EP The Black Hand Of The Father. There is a lot to be excited about when it comes to Antzaat, with a vocal sound that harkens back to the likes of Mayhem but with a modern black metal heaviness,  For You Men Who Gaze Into The Sun is a hidden gem.
Musically, the sheer size and scale of the atmosphere that is built up throughout the album is a lot to take in on a first listen. For You Men Who Gaze Into The Sun, reminds me very much of a Mgła album, a fast paced but groove filled adventure into the black, screaming void. There is also a dark and brooding edge to the album, very reminiscent of the band's aforementioned 2017 release The Black Hand Of The Father, the band it appears have been able seamlessly transition this gnarling, raw energy  from EP to album.  Again, you find that this is an album that needs to be listened to in its entirety to really appreciate the narrative of the songs, as each blends into one and feels like the next chapter in the saga of a complex, apocalyptic landscape. This apocalyptic feeling, is compounded by the riffs themselves. Whilst the melodic passages keep each song moving forward, rhythmically it is an onslaught of pace and power. It can only be described as ornate apocalyptic grandness, combining the more straightforward elements of black metal with more progressive waltz like sections, which is best demonstrated in Between The Beginning And The End, makes the album am exquisite feast for the black metal ear. With this in mind, the album keeps you on your toes throughout, as you never truly know what is coming next as each song tops the one before it. Despite the foreboding, brooding apocalyptic mood, the album contradictorily carries a triumphant pride in itself. There is something emotionally in the soul of the album that provokes feelings of power within you. Not something that you'd usually hear about an album seemingly calling you stupid for looking into the sun (which you would be, don't don it), but this is a testament to the band's confidence in their sound, as they are showing musical aptitude and ability beyond their years. There are also a lot of complex and intricate layers to the album, little nuances that you hear after a few listens that add to this albums spectacular sound. This mainly refers to the more melodic and dynamic shifting elements throughout the album, as the bass has a prominent role in carrying the melody as well as the chords, which isn't something that I've heard a lot of recently. Overall, Antzaat have presented a real gem of a black metal album, packed full of riffs and epic atmosphere, definitely an album to get lost in.
The production is quite contained, as this album had the potential to sound over the top, given its atmospheric black metal tendencies. However, the album contains all the raw energy that the band possess, whilst still being spacious and omnipresent. The drums are expansive, with the kick becoming the central anchor point, the snare and cymbals snap and ring into this massive space that enhances their power. The rhythm guitar tones are thick and weighty, locking in with the bass tones to create this sturdy foundation for the constantly evolving leads to sit upon. The leads themselves are fuzzy and sit above the robust rhythm section, sometimes battling the vocals for space. I love the vocal mix, but I think it sounds a bit dry in relation to the rest of the album, a little more reverb would have taken this to the next level for me. Overall, the album is well mixed and captures everything that the band is about perfectly.
If you fancy some hard hitting yet glorious Belgian black metal, give Antzaat a spin!
Antzaat - For You Men Who Gaze Into The Sun
Album Reviews