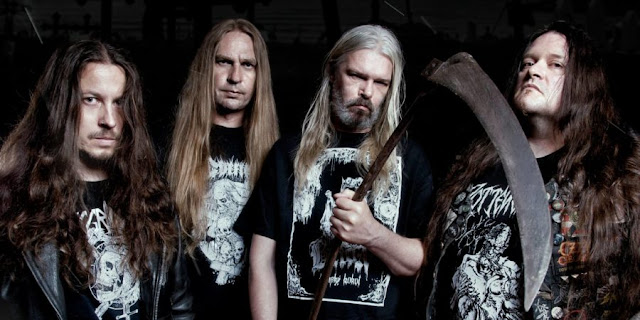 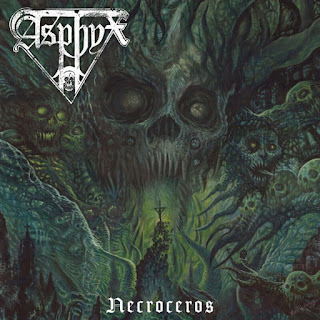 Asphyx - Botox Implosion
Review
Rating (out of 5): 🤘🤘🤘.5
Dutch death/doom monoliths Asphyx make a brutal and punchy return with a brand new single from upcoming album Necroceros! Supplying some of the finest death/doom for the last thirty three years, there is no slowing down for this legendary band. Aspyhx was the entry point for me in the world of death doom and its awesome to see them still sat upon that almighty death/doom throne. Lyrically waxing on aside,  first observations of the cover art gives me The Black Dahlia Murder vibes, as their recent release Verminous had a distinctly green tinge to its album art as well. Maybe the pupil has become the master in this case? Speculations aside, Botox Implosion is a short, sharp bludgeon to the head, with the band focusing significantly more on their death metal side than their doom side for this single.
Musically, it carries on in a similar vein as 2012's Deathhammer and 2016's Incoming Death, (although I suppose when you look at it in that time frame this album is a long time coming) which focuses more on a relentless fast brand of Dutch death metal. With this in mind, I've always been surprised with Asphyx records, as the aforementioned releases show, they can do death and doom extremely well. So, whilst not in the context of the whole album to back up where it fits, I have to take the song at face value. Straight from the first second you're launched, full throttle into a maelstrom of typical Asyphx riffing. Compounded by unrelenting drums, you have to buckle in because it's a song that will rearrange your face just as the title implies. This more red-lined effort, is written with the more typically humorous death metal gore topic in mind, but diving a little deeper into the gore ridden and graphic lyrics, it is a damning criticism of the beauty industry. Whilst metal has always had a connection with social issues and commenting on the plague of humanity, Botox Implosion holds a very visceral message, that is not for the feint hearted.  When the song opens up with these verses;
"Booming business
Med-spa industry
Leeches preying
On low self-esteem
Insecure adolescents
Mentally unstable souls
Faded celebrities
Refusing to get old
Omnipresent media
TV and Internet
Defining attractiveness
Idiotic standards set
Fake depressions
Whining teens
Obsessed with beauty
Drama kings and queens" - Asphyx 2020
It channels a lot of the disgust that we have in society about how beauty is marketed and how it effects the younger and more vulnerable members of society. This vile profiteering off of selling "perfection" is definitely something that grinds my gears, and despite the gory imagery, the song makes this point abundantly clear. With this weighty topic on top of some cataclysmic riffs, it is an aggressive and visceral song to digest. Overall, it is a song in the typical mould of Asphyx but feels a lot more charged in its lyrics, I'm looking forward to hearing in within the full context of the album.
The production has perfectly capture the raw aggression and visceral despise that the song has. The meaty kick hammers home the rhythms and fills the low end with cavernous, thundering blows. The snare has a solid snap and sounds extremely tight alongside the kick, whilst the cymbals crash and smash chaotically over the top. The guitar tones are signature Asphyx, chunky when they need to be and revving like a chainsaw, all underpinned by a thick, chugging bass. Overall, the mix is distinctly Asphyx, as heard on 2012's Deathhammer and 2016's Incoming Death.
If you need a new death metal belter on your playlist, I'd queue up Botox Implosion now! The new album Necroceros is  going to be an awesome way to kick off 2021 after the year we've all had, and I cannot wait for that day!
Single Reviews