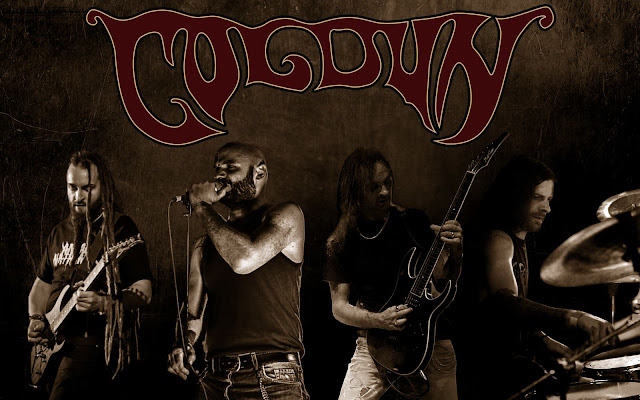 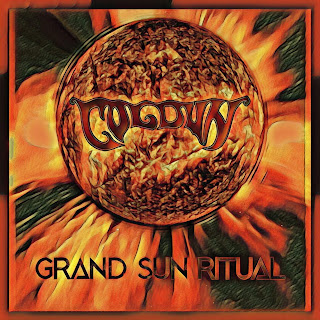 Review
Rating (out of 5🤘): 🤘🤘🤘🤘
Favourite Track(s): Grand Sun Ritual, Down Below, Salvation Day, Stories Untold, Hail Out To Thebes
Originally beginning as a solo project back in 2006, Coldun has evolved into a collection of intuitive and talented musicians that have come together to create thought provoking and soulful atmospheric progressive metal. Incorporating elements of doom, prog and post-metal to create a philosophically charged and conscious sound that will put you in a deep, trance like state. Through intricate melodies and mesmerising vocals, Coldun bring something unique and refreshing into the progressive metal scene, focusing more on grand atmospheres and intricate passages of melody and harmony. Grand Sun Ritual revolves around the eternally provocative and topical questions of the meaning of humanity and the respective meaning of life and death. This is a band that isn't scared to innovate and experiment, pushing the boundaries of their sound into new, exciting and adventurous sonic environments, elevating their deeply personal sound into the upper echelons as a result.
Musically, the first thing you're instantly drawn to the deep, mellow and dulcet tones of founding member Coldun's vocals. Reminding the listener of a more graceful yet enigmatic Michael Poulsen (of Danish band Volbeat), as they both have a similar vocal style and delivery. Coldun's deep and thought provoking lyrics power through the songs, giving an ethereal and spiritual quality to the album. Some of the more fascinating elements of the album consist of the Hammond organ and synths, the only other bands that  can be thought of in the modern era of prog where these instruments have had such a prominent involvement are Enslaved and Opeth. It is phenomenal how well written the parts for the Hammond organ are, often supplying the eerie and almost illusive melodies, metaphorically speaking the listener has to chase through the album. Once finally "caught" they open up the listener to a whole new dynamic and perspective that they may have missed on a first listen through. This is just a small insight into the grand nature of the album, there is a lot to processing digest, emphasising the album's concept of the eternal meaning of life and death. Even so, the album demonstrates the considerable growth and evolution of the band, moving away from the guitar centric approach on 2014's Collapsing Polarities and building upon the foundations of the cinematic part of their sound which was established in full force on the Collapsing Polarities album. It could be argued that any one of these songs could feature as part of the soundtrack to a massive Armageddon style film, as the emotional response triggered in the listener takes you to the emotional closing scenes of a film where humanity's very existence is on the line. Stories Untold is a great example of this, reducing the previous songs energy and converting it into a sombre, emotional and heartfelt ballad. Coldun's voice really shines on this track, surrounded by gentle and subtle lead melodies provided by the guitars. However, after Stories Untold finishes, the crushing opening riff of the album's longest song Hail Out To Thebes comes in like a freight train, in possibly one of the smoothest transitions of the album. In some ways the album as a whole is definitely a musical journey through complex emotions and internal questions that we don't always ask ourselves or particularly process in a healthy manner. Set that to the an evolving form of ethereal music, the listener is presented with a spiritual catharsis, almost meditative in its approach. Each person will interpret this album differently, and it encourages the listener to read between the lines to search their own soul. Overall, the album is a finely crafted, incredibly well arranged and constructed, in many ways words can't quite do it justice, as it is such a new and refreshing listening experience.
The album's production is fascinating in many aspects, in some ways you could be drawn into thinking that it was recorded in a church or cathedral as it sounds so cavernous and spiritual. The kick has a nice weight to it, as does the toms that fill out the low end, reverberating into the cavernous space that has been created. It is a similar case with the snare, with some of the high end rolled off and the snare element loosened slightly it creates this deep, bellowing smack that is essential to driving the songs. The rhythm guitar tones are thick, crunchy, and distorted with a warmth which adds to the ethereal overtones of the album. The clean leads have a lovely reverb/delay combo that helps emphasise the melodies in the quieter sections, floating over the top of the drums and rhythm guitars. The distorted leads have a real sharpness to their tone to contrast this, elevating the use of dynamics through the sound contrast. The Hammond organ has a real raspy drive to it which adds something different to the various textures and layers, as a result opening up the soundscape. The bass drives consistently throughout the album, locking everything together and filling the low end. The only thing that could be improved is less reverb on the vocals, as sometimes it is difficult to hear the lyrics, whilst it is highly ethereal, the message can be lost on occasion. Overall the album has a brilliant warmth and ethereal emphasis in its production, augmenting the music and aiding in delivering the concept with absolute precision and perfection.
If you fancy hearing this thought provoking and soulful album, make sure you pre-order by following the Bandcamp link below!
Coldun - Grand Sun Ritual
Album Reviews Sounds Of The Underground