Green Druid - At The Maw Of Ruin 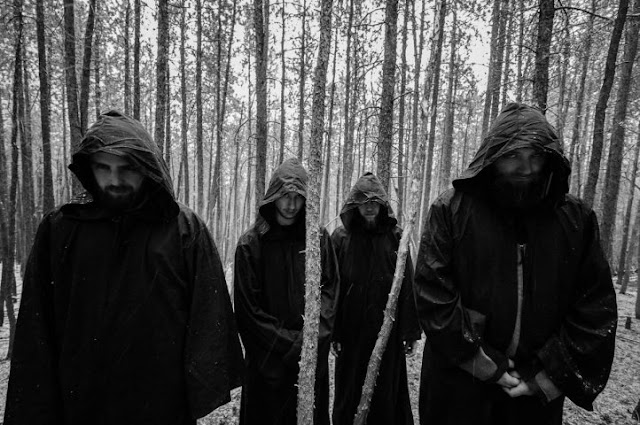 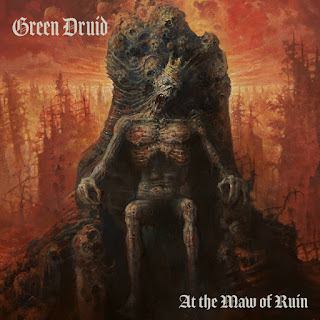 Review
Rating (out of 5🤘): 🤘🤘🤘🤘
Favourite Track(s): The Forest Dark, Haunted Memories, A Throne Abandoned, Desert Fury/Ocean Of Despair, Threads
American doom metal outfit Green Druid have quickly become renowned for packing the deep, low and pounding riffs into a world of intrigue and mystery, the band's new album At The Maw Of Ruin offers all that and more. The band set a precedent with debut album, 2018's Ashen Blood, as a mix of proto-Sabbath riffing combined with American mysticism. At The Maw Of Ruin sees the band expand their sound, heavier riffs and even more ethereal mysticism with a big revamp on their production. The weight of man's ruin is painted vividly through the band's lyrics and bears down on you with every chugging riff.
Musically, the album packs a punch with every note that's played. Riffs that would literally shatter the core of the Earth, moulded by that signature Black Sabbath formula and being unleashed as a completely new beast! Whilst listening the listener gets lost in the slow, thumbing trance as the album marches on. One aspect that dominates the album is the weighty bass riffs, in many cases they drive the songs forward, especially in the sparser, more eerie and experimental sections. Desert Fury/Ocean Of Despair is a prime example of this, as it ebbs and flows effortlessly between heavy fuller sections and slower, more atmospheric sections over its thirteen minute runtime. Ebb and flow is probably the best way to describe this album, as the atmosphere swells and evolves in its own way, enveloping you in its hypnotic, trance inducing frequencies. Backed up by the melancholic riffs, the lyrics have a very visceral impact, highlighting the despair and toils in the world that album creates. The album has two very distinct styles of riff that have been expertly blended together to create a real sense of depth and craftsmanship. The more stoner riffs have a really punchy groove and carry most of the up tempo movements. In contrast the all out doom riffs bring the energy right down but build the tension up so well that when the stoner riffs come back in, they hit just that bit harder. The album has a very conceptual feel, and as all the songs morph into one it feels like different sections of the same story. A couple of examples would be; opening track The Forest Dark stands as a very aggressive introduction and looms large over the listener, Haunted Memories has a thoughtful, solemn and reflecting vibe, as if through the eyes of someone who has witnessed significant destruction like the destruction that is wreaked in End Of Men. Blending ethereal vocal sections amongst all the chaos breaks up the songs perfectly and adds an extra layer of texture to keep the listener tuned in. Overall, the album is a brilliant example of modern doom, taking in all the usual imagery and warping it into a modern dystopian, apocalyptic narrative that makes you deeply reflect on what is around you.
The production for the album is huge and very weighty towards the low end. As has been alluded to in the previous paragraph, this album is geared to wards a low, rumbling, driving bass. Accompanied by a pounding kick cutting through the mix, the bass sounds tight whilst swelling and consuming all the low end. This allows the guitars to experiment and coast through the mid range with crunchy, distorted tones. The lead tones have an awesome reverb setting on them that the lister is drawn to in the more striped back, ethereal sections of the album. This gives the mix a really post-metal vibe, which adds to the rich diversity of textures and nuances of the album. Overall the mix is a significant improvement on what the band first unleashed on the world on 2018's Ashen Blood. Packed with all the typical fuzz and haunting vocals you come to expect from this style of doom, there is definitely more to find with each listen through.
If you fancy becoming a doom druid today then it is well worth an hour of your time to sit back and get lost in Green Druid's crushing new album At The Maw Of Ruin.
Green Druid - At The Maw Of Ruin
Album Reviews