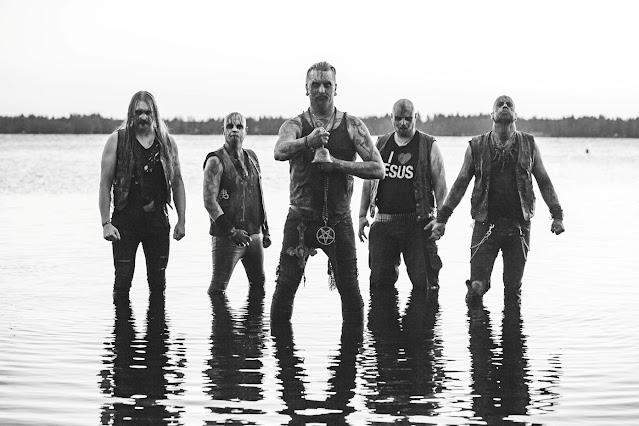 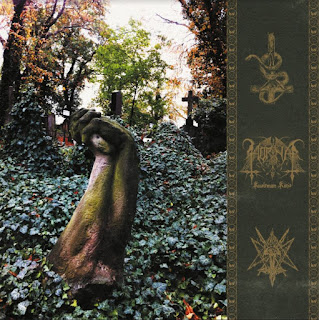 Review
Rating (out of 5🤘): 🤘🤘🤘🤘🤘
Favourite Track(s): Saatanan Viha, Elegia, Sydänkuoro, Haudattujen Tähtien Yönä, Unohtumaton, Mustat Vuodet, Rakas Kuu, Veriuhri, Ota Minut Vastaan
Finnish black metal legends Horna are back with a dark, devious and evil new album, suitably titled Kuoleman Kirjo (meaning The Spectrum of Death). Packed with crushing riffs and oppressive, claustrophobic atmosphere, it is an album perfect for the current situation humanity finds itself in. Taking is back into the dark and shadows of the mysterious Finland, Horna have presented another fine example of raw, aggressive and ruthless Finnish black metal. Horna have consistently put out solid and creative albums from the band's very beginning and Kuoleman Kirjo continues this devilishly impressive and brutal trend with ease. Compared 2015's Hengen Tulet, the band have ramped up the evil and dark sound they are famously known for, and present an album that will make your should freeze over and turn black with frostbite.
Musically, Kuoleman Kirjo has all the trappings of an old school black metal album. However, the album sounds more expansive than anything the band have done before. Harking back to some of the elements  found in seminal albums Envaatnags Eflos Solf Esgantaavne (2005) and Askel lähempänä Saatanaa (2013) with some of the more modern influences, the album feels like a more settled and calculatingly destructive era for the band's music. All of the combined make the album feel so visceral and raw, transposing the listener into this black pit of ruthless riffs and blast beats. Although the band have had a varying rotation of members and differences in sound over the last two years, Kuoleman Kirjo seems to acknowledge its predecessors whilst simultaneously launching the band into a new era. The overall tone of the album is wrathful yet sombre, combining groove laden passages with forlorn atmospherics. There is an underlying ritualistic tone to the album, especially in the more sinister songs Saatanan Viha and Rakas Kuu as they channel the dark and despairing emotions found in old school black metal. This is definitely an album of contrasts too, as songs such as Sydänkuoro, Elegia and Unohtumaton channel the blistering speed and ruthless aggression of more modern black metal. This is one reason why the album is outstanding as the band have shown significant consistency from start to finish, without any songs feeling rushed or like they're dragging. The songwriting itself is outstanding, making the album effortlessly flow evenly from start to finish, this is a testament to the band as the performance itself is tight and cohesive. Considering this album took five years to appear, it demonstrates how hard the band have worked to improve and evolve their sound. The riffs themselves are excellently crafted, sounding deeply sinister and evil, and like the album they have their own "spectrum" varying themselves from traditional tremolo leads to thick and heavy grooves. The shifting dynamics aid the listener in fully immersing themselves in the hour long album. The atmospheres created are worth a special mention as they are constantly morphing and transitions between anger, sorrow, sinister, evil, forlorn and ominous melancholy. With that in mind it makes the album feel very eerie, perfect for the cold, dark winter nights. The album has a dark magic to it, it draws you into its chaotic and hellish world, in which you have a bleak epiphany as you observe the metaphorical destruction the album has wrought. Overall, Horna have yet again proved why they are a staple in the Finnish and global black metal scene, constantly evolving into something bigger whilst honing their musical craftsmanship to make bigger and better albums consistently.
The production is the biggest revelation about this album, compared to its recent predecessor 2015's Hengen Tulet, it is miles ahead. Whilst Hengen Tulet has that old school 1990s black metal sound, Kuoleman Kirjo capitalises on more modern and conventional methods to make the album sound just as sinister but with the weight of a wrecking ball so that it wreaks devastation on unsuspecting ear drums. The kick has a thick and heavy weight to it, pinning down the chaos around it and driving the songs forward, with a snare that rattles off like a gatling gun. The guitar tones are raw, yet significantly chunky in the mid and low frequency ranges, making the slower, groove centred riffs have a bigger impact in the songs in which they feature. The bass is surprisingly layered and textured (which is because of the skill of VnoM), simultaneously filling the low end but also plugging the spaces left by the guitars to give its full weight to the songs. This evolutionary mix is definitely one that the band needed, not to discredit previous albums but this brings Horna kicking and screaming into the modern black metal sound, which enables to truly unleash the fury of their music. Overall, this mix is the stand out feature of the album, everything sound perfect and aids in the immersive listening experience of the music.
If you fancy some upper echelon Finnish black metal from legends that have been around for the last two decades, don't wait, get Kuoleman Kirjo in your ears now!
Horna - Kuoleman Kirjo
Album Reviews