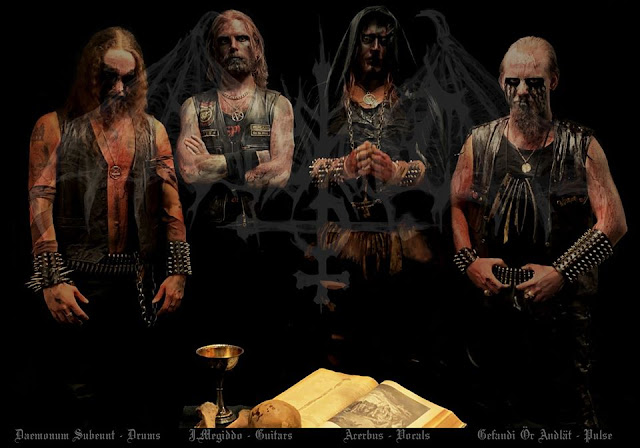 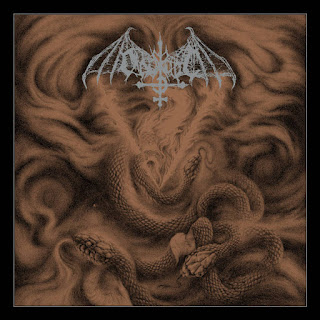 Review
Rating (out of 5🤘): 🤘🤘🤘🤘🤘
Favourite Track(s): Semita Sinistram, Ascension, Animam Malum Daemonium, Paragon Belial, Possesion, Excision
The Swedish black metal heavyweight Ondskapt returning with their grizzly and demonic new album Grimoire Ordo Devus. A glorious hour worth of cold and dark black metal riffs sure to satiate your blackened heart, whilst guiding you towards the well trodden left hand path. Utterly sinister in its methods, it more than lives up to its grimoire name. Whilst there are many bands that utter words of diabolical Satanism and sweet blasphemy, none have quite done it like Ondskapt have with this album. Even with the tumultuous history of turnstile members, the ever present voice of Acerbus continues to echo through the never ending void to worship death.
Musically, the band offer up their unique brand of black metal, which a translation of their name suggests, this album truly is created by evil. Offering themselves up as vessels for devil worship, Grimoire Ordo Devus offers up a relentlessly fast paced traditional black metal with an aura of mysticism. What really stands out is how well the band have woven intriguing and more strangely, beautifully melodic passages in between relentless, dissonant, rhythms and riffs. As every song melts into each other, with this quality of songwriting in mind, it creates an uninterrupted trance like state that the listener finds themselves in, nodding along to the grooves whilst reaching a higher spiritual plain. Another striking moment in the album is halfway through Possession, where we hear a woman pleading for her saviour before being enveloped by a demonic energy. A truly chilling plea that sets up vivd imagery in the listeners mind which truly captives in hideous awe how evil this album is. It almost feels like people could be scared of metal again after hearing this album, which adds to the thrill of listening to it, knowing that at any given moment a demon could have his way with you. The riffs follow fairly traditional black metal patterns and structures, however there is a heavily discordant melodic focus, which keeps you on edge yet doesn't detract from the overall brooding atmosphere. The album by nature is chaotic, but these carefully constructed passages demonstrate the evolution of the band's songwriting. Ondskapt have always been a unique sounding band, as 2010's Arisen From The Ashes and 2005's Dödens Evangelium can attest to, this album builds on what has gone before it with some added complexity and nuance which makes this the band's masterpiece to date. Combining all out heaviness with progressive black metal tendencies in a demonically cathartic and chaotic atmosphere makes Grimoire Ordo Devus a force to be reckoned with. Like the ferryman on the river Styx, the album takes you to some dark places which is equally thrilling and terrifying. The use of dynamics is interesting, as it lures you in some areas into a false sense of security, before dialling it up to 11 and thrashing you about like the apocalypse is happening in that very moment. Old And Hideous is the shortest song on the album, but is a real pile driver that amps up the energy before the closing movement of the final track Excision. The final track Excision, is a culmination of the whole album, compacted into one devilishly epic track. Enclosed is the complexity and nuance of the album that finally makes you succumb to its evil and sinister will. Vocally the listener is reminded of Attila Csihar, but a much better version in all honesty. Overall, the album is phenomenally written, captivating and an exciting listening experience, Ondskapt just keep getting better!
The production is by far the best the band have sounded in their nineteen year history. Moving away from the stereotypical black metal production of their previous albums and applying a much more Dark Funeral method of production. This allows the album's complexity to really shine and envelope the listener in its sinister and eerie atmosphere. The distorted guitar tones are cold and harsh, and sit comfortably in the mid and high range to allow the bass to really drive through and give the riffs some weight. The kick drum is thick, heavy and thunderous, blasting through the mix accompanied by a snare snapping so fast it sounds like a machine gun. The clean and acoustic guitar tones really stuck out in the quieter more ethereal sections of the album, echoing into the ether. They give the album an added dimension and texture which is unexpected but very welcome. Overall, the album sounds huge, packing a punch in all the right places and dialling it down to when necessary to create that tension and eeriness.
An epic effort from Ondskapt sees Grimoire Ordo Devus easily become a contender for a top albums of the year spot. If you fancy some ultra devilish black metal, give Grimoire Ordo Devus a spin!
Ondskapt - Grimoire Ordo Devus
Album Reviews