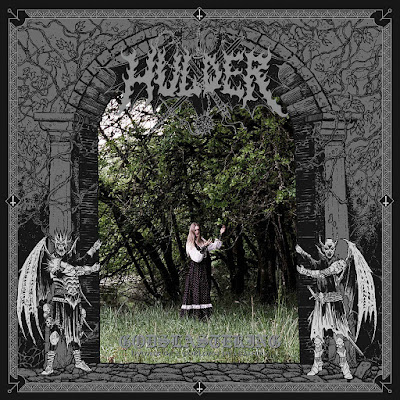 Review
Rating (Out of 5🤘): 🤘🤘🤘🤘🤘
Favourite Track(s): Upon Frigid Winds, Sown In Barren Soil, De Dijle, Lowland Famine, A Forlorn Peasant's Hymn, From Whence An Ancient Evil Once Reigned
The highly anticipated debut album of one of the most exciting projects in the black metal scene to date. Hulder is the solo project of The Inquisitor, a Belgian woman currently residing in the US. With lyrical themes focusing on Belgian folklore and all things medieval (including the torture), Godslastering: Hymns Of A Forlorn Peasantry is a relentlessly aggressive album drenched in the rich trappings of traditional, blood thirsty black metal. After the incredibly well received 2018 demo Ascending the Raven Stone, Hulder has continually grown and evolved to bring us the dark and danger of the medieval era with the full force of raw black metal behind it. Hulder's rise from depths of the underground to prominence can not be underestimated, through eight monstrous and epic tracks, the listener is taken on an intense journey into the depths of darkness, capturing the dissonant resonance of old school black metal.
Straight away the listener is hit with a swift punch to the gut when Upon Frigid Winds opens the album with blood thirsty intent. However, although this chaotic opener drags you into the world of darkness, it does not define the album, as there are various ambient passages incorporated alongside synth melodies as demonstrated on De Dijle. Throughout the album the standard of composition and arrangement is outstanding, some how fusing an intense melodic idea alongside the dissonance and unrelenting noise of raw black metal is something to behold. The synth elements help create a dynamic and rich texture full of mystery and intrigue, creating vivid depictions of sinister, abandoned medieval castles and abbeys conquered by dark and evil paranormal forces. Whilst the main rhythmic riffs of the guitar drives the songs forward, the chiming synths carry eerie melodies above the chaos. With this in mind, these elements combined centre around a deeply atmospheric focal point, whilst there is significant raw aggression there is a solemn isolation and mourning underneath. Whether this fits a concept or not is up to the listener to decipher, but through the feeling of isolation you get to really feel the icy, freezing fingers of the riffs and melodies as they clutch at your heart and soul. A Forlorn Peasant's Hymn is a stand out track for its uniquely dark mournful and atmospheric beauty in the beginning before thrusting you into the fray of whirlwind guitars and screams echoing into the void of despair.  The incorporation of finger style acoustic melodies is another example of the subtle intricacies of the album and the versatility of The Inquisitor's songwriting. Whilst appearing at surprising times on the first listen through, they provide a dynamic contrast in the songs, giving the main raw riffs an extra kick when they come back in. The best example of this is in the album's closer From Whence An Ancient Evil Once Reigned, channelling all the major aspects of the album into one final victorious song, that is equally explosive and atmospheric. Whilst Hulder has written and recorded lyrics in her native Flemish tongue before, it would be epic to hear another album of this magnitude all in Flemish, but that is a hope for the future. Overall, the album is perfectly composed to be both viscously explosive and melodically eerie, Hulder has struck the perfect balance of head crushing riffs and epic medieval atmosphere.
The production is invigoratingly fresh and exciting. Still holding on to the rawness that The Inquisitor made Hulder's name on, but the album has a mystical live feel to it, as if the album is living and breathing beyond the sonic realm. The rhythm and lead distorted guitar tones have the treble loaded chainsaw buzz to them, that envelope your ear drums with a battering barrage either side. The clean and acoustic guitar tones have an amazing earthy and full tone to them, which just fills the left over space with this rich atmospheric and textural layer. The use of natural world sound effects on De Dijle, gives the song an eerie serenity alongside its haunting chime like synths that are at the forefront of the mix. The bass in all its distorted glory, gives weight to the guitar riffs whilst the kick drums offers a solid pounding to the ear drums. The snare snaps perfectly for the album, not quite a machine gun when the blast beats kick in but very reminiscent of Darkthrone. Overall, the mix is just as awesome as the music!
This album has the potential to be one of the black metal albums of the year. With it's explosiveness and eerie subtleties it is well worth a listen!
Hulder - Godslastering: Hymns Of A Forlorn Peasantry
Album Reviews