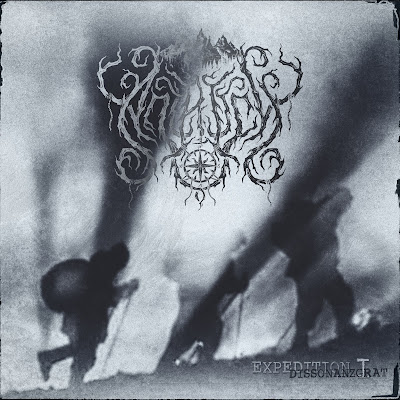 Review
Rating (out of 5🤘): 🤘🤘🤘🤘🤘
Favourite Track(s): Aufbruchsignale, Stirnschlag, Firnfeldkonfrontation, Gipfelfieber
The arctic and antarctic will always be the final frontier of human endurance. The vast and cold tundras are inhospitable and unwelcoming to all those who dare to venture there. Whilst us mere mortals will never even consider venturing physically to the freezing northern and southern points of the earth, but we always have an imagined notion of what it is like. Inspired by the world-famous South Tyrolean mountaineering legend Reinhold Messner, who published the dialectical term 'antric light' (which stands for 'strange, secretly, uncanny') Würzburg's Antrisch are here to give us a glimpse at what those early expeditions were like. The extreme and unforgiving landscape is captured perfectly, whilst capturing a wide range of complex, adrenaline fuelled and fear driven emotions. Considering black metal is extreme music, it is amazing to think that something like arctic exploration hasn't been covered thematically before, after all, it is the most extreme environment on the planet.
Antrisch fuse together elements of doom, black and progressive metal alongside chilling dark ambient synths to truly capture the environment that they have placed their music in. From the very first minute you are left with a constant chill down your spine, as it feels like the band gave carved out the grim, isolated and chilling atmosphere out of a glacier. Nothing captures this more than the dark ambient section in Stirnschlag, the swelling and moving synth passages accompanied by a solemn guitar and solitary vocals echoing into the icy void. Using various sound effect recordings of antarctic winds also help capture the bleak frontier that these explorers faced, leading to an emotional response of hopelessness yet the band have captured a strange beauty in the cold isolation. Conjuring up vivd imagery of ice peaks, and the constant white sheet that faces you, there is something pristinely beautiful in that, something so pure yet so deadly. There is a surprising amount of groove throughout the album, that continually evolves the longer the songs go on, bringing something fresh to the progressive metal chugged riff (i.e. something more than the Meshuggah special). This progressiveness is a gift that keeps giving, as with each listen through you detect something new, this is best demonstrated in Firnfeldkonfrontation. The black metal elements seemed to have been influenced from multiple sources, and have been moulded into something distinctly unique. Whilst it does still contain the usual discordant chaos, it is still intensely melodic in its approach. Using the discordance as a melodic device that supplements the ambient sections is quite a skill, and adds to the atmopsheric grandeur of the songs. With the lyrics being in German, the harsh and aggressive tones give the music a real bite, as if Maurice Wilson was spitting spear pointed icicles at you. The vocals themselves have such a strong emotiveness about them, highlighting the struggle to fight the cold in various sections but also the raging fear of having to deal with such a dangerous challenge. That in itself is intensely moving. Considering the band only came together last year, there is a considerable cohesiveness to the EP, which is a testament to the band's superior musicianship. Everything feels carefully calculated and executed perfectly, to deliver the full devastating force of the concept at hand. Which feels very similar to the approach that Ukrainian band 1914 utilise when they work with the various aspects of the World War I themes and concepts. Overall, the EP does an expert job at capturing the ravishing grimness, haunting beauty and primal human fear that surrounds the polar caps. With its highly atmospheric approach, you will become full immersed in this stunning debut album from Antrisch.
The EP's production is just as captivating as the compositions themselves. Constantly shifting dynamic and textures exudes a strong and rich complexity, that captures all the subtle nuance as well as the strong and chaotic nature of the concept. The rhythm guitar tones are well balanced in the mid and low end, working well with the tightly controlled bass to deliver a gut punch in the riff department. The lead guitar tones are fairly sharp, there has been a creative use of panning so that it feels like the melodies are moving on the arctic winds. The kick is thunderous, with a really punchy thump that cuts through the mix, woe betide your skull when the blast beats hit. The snare has sharp snap that cuts through with devastating effect. The evolving pad synths add some extra texture and are constantly moving underneath the chaos throughout the EP. Overall, the mix is just as intense as the music itself, expansive but contradictorily  claustrophobic as you are confined to the clothes on your back for warmth and the cold closes in around you.
If you fancy joining these intrepid daredevils in the artic tundras on their first expedition, save the 8th April in you expedition log as Expedition I: Dissonanzgrat is due for digital release on 8th April.
EP Reviews Sounds Of The Underground