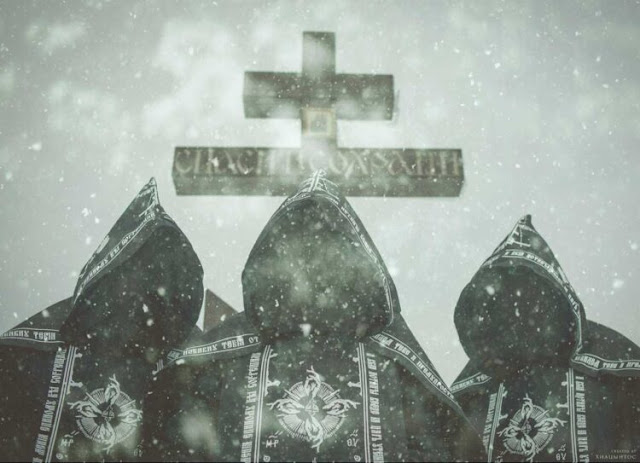 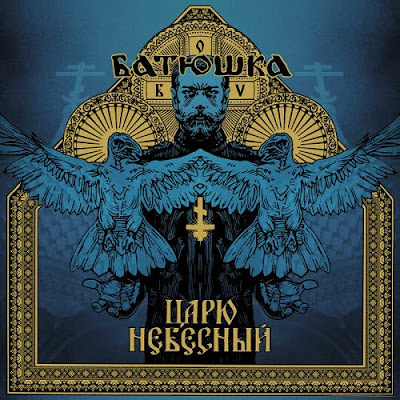 Review
Rating (out of 5🤘): 🤘🤘🤘.5
Favourite Track(s): Pismo II, Pismo IV, Pismo V, Pismo VI
It seems like only yesterday that this incarnation of Batushka gave us РАСКОЛ / RASKOL which came out in August last year, with album artwork blazing an image of what most certainly could be infamous Russian Grigori Yefimovich Rasputin. Which makes this new EP even more fascinating, whilst no hint has been given as to wether these EPs are two sides of the same coin, the likeness of the last Tsar,  Nikolai II Alexandrovich Romanov, on this EP cover is unmistakeable. The history lesson shall be spared, as it is a complex one between Rasputin and Tsar Nikolai, but the small observation is certainly interesting. Whilst the lawsuits have been seemingly settled, the creative output of Bartłomiej Krysiuk's (Барфоломей) Batushka is yet to be matched as Царю Небесный/Carju Niebiesnyj is unleashed on the world.
Царю Небесный/Carju Niebiesnyj as a whole doesn't really venture outside the realms of the already, firmly established Bathuska sound. Whilst the choral chants are still present, they seem to have been dialled back slightly, which interestingly makes it feel more intense as some of the previous grandeur is toned down. Whilst the band have always had a good grasp on dynamic variation, creating solemn sections before launching into hard hitting, heavy sections, but in some songs this formula is somewhat predictable and can kill the sense of anticipation. Even so, the melodies are still haunting and finely crafted throughout the EP, more so than it's predecessor Raskol. Throughout the album there is a tense discordance that hasn't been seen in any Batushka release, giving rise to this feeling of foreboding doom. Accompanies by the various solemn and forlorn clean guitar sections, like the ones found on the EP's closer Pismo VI, it seems that there has been a slight directional evolution. Царю Небесный/Carju Niebiesnyj feels like it could be a black metal sermon, as there are moments of talking in the old Russian/Slavic language that they sing in that gives the impression that the band are talking directly to you. Also worthy of note, is the use of traditional Eastern European instruments, whilst they are predominately in the background until you get to the climactic seven minute epic Pismo VI, they add a new and interesting texture to the band's sound. Adding this new and authentically Slavic element makes the EP infinitely more interesting when you notice their existence. The song that will catch most listeners off guard is Pismo V, the haunting chants of a woman echoing through sacred halls accompanied by a haunting guitar and the bass chants of the band. It gives the impression of a funeral song, as someone fades into the afterlife. The emotional resonance this song has makes it stand out leagues in front of the other songs. Conceptually, even if Carju Niebiesnyj and Raskol aren't one in the same, given the band's choice of continuing with the Eastern Orthodoxy route it is hard to resist the urge to make it about Rasputin and Nikolai II. One was a ruler by divine right under God and one was a maverick faith healer that somehow made himself indispensable to the Russian royal court. Given how deeply embedded these men are in Orthodox history, it is a fair assumption. Both EPs feel like they are charting the rise and fall of its assumed respective characters. Overall, it's still quintessentially Batushka, so you know what you can expect, but the small touches mentioned above and the potential concept behind it makes it infinitely more interesting.
The production of the EP is interesting as it is less raw than Raskol, taking a more clinical and cleaner approach. This could be to allow the traditional instruments to shine through, as over distorted guitars has the potential to drown them out. In the case of Pismo IV, they seem to coexist perfectly, neither dominating the other. There is still an epic grandeur to the Batushka sound, which the band have become masters of harnessing. The guitar tones, are thick and heavy with and overdriven warmth that is then turned up a notch when accompanied by the deep, distorted bass. The vocals as usual are layered and mixed to surround the listener on all sides, as if being swarmed by an over excited male choir. The drums sound surprisingly tight on this release, with the kick having a solid punch and the snare snapping through perfectly. Accompanied by the traditional instruments weaving their way through the usual metal chaos, Carju Niebiesnyj is probably the most professional sounding Batushka release.
If you fancy some mysterious, Eastern Orthodoxy inspired atmospheric black metal that is potentially charting the live of the Last Tsar Nikolai II, get listening to Царю Небесный / Carju Niebiesnyj now!
БАТЮШКА - Царю Небесный / Carju Niebiesnyj
EP Reviews