Stormtide - A Throne Of Hollow Fire 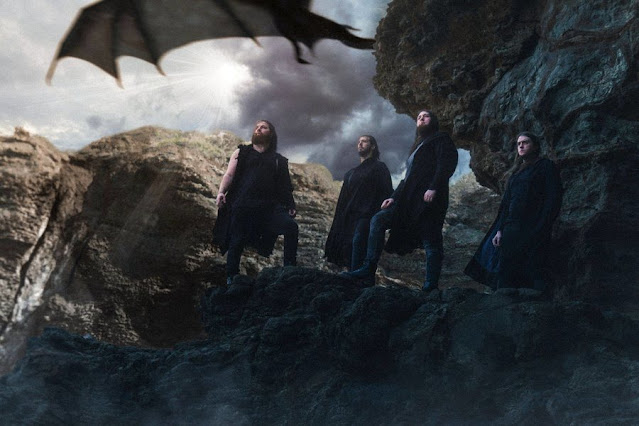 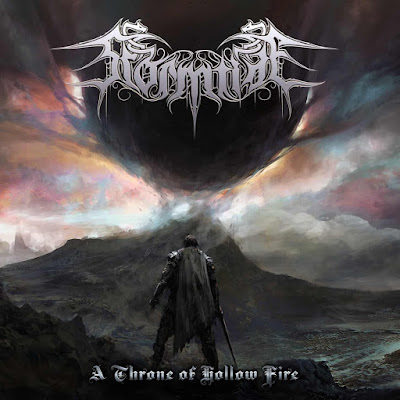 Stormtide - She Who Would Name The Stars

Review
Rating (out of 5🤘): 🤘🤘🤘🤘.5
Favourite Track(s): A Throne Of Hollow Fire, Awakening, One Last Pint (At The Duck), Wayfinders, Eternal Fire, A Warship Braved The Tempest, She Who Would Name The Stars
In a world of dragons, swords and fantasy, hails a symphonic death metal band. With their instruments they smite all evil that comes before them with gigantic riffs and triumphant symphonic movements, bringing down a storm of thunderous beats that would make the Misty Mountains shake! To gain A Throne Of Hollow Fire is their next quest, and you can join them! If I haven't convinced you to become part of this journey with that introduction, I don't know what else to do. Australia's Stormtide burst on the scene in 2013 with debut EP A Skalds Tale and have been on an upwards trajectory ever since. Weaving tales of fantastical grandeur into their vast soundscapes is something to behold. Following on from the  2016's Wrath Of An Empire, A Throne Of Hollow Fire is equally theatrical and triumphant.
Stormtide fuse groove laden death metal rhythms and riffs with highly atmospheric synths and symphonic elements, often using the latter to dictate the various tempos and dynamics of the songs. After the gradual and tense build up of the intro track A Valley Of Ashes, you are thrust straight into the action and adventure. The Amon Amarth style death metal rhythms upholding grandiose synths and choral melodic passages, create a vivid and illustrious procession of fantastical imagery in your mind. Each song feels like it is linked conceptually to the one before, creating a cohesive and highly immersive fantasy epic. The use of more folky melodies and rhythms is something that stands out, although it is nothing new in this case it just has something special and natural about it, in other words it doesn't feel forced together. The album's approach and structure has a similar bearing to Finland's Ephemerald and their debut album Between The Glimpses Of Hope, in which the synths are the main melody carriers from start to finish, although vocally theirs is more black metal sounding. When the guitar melodies come in, they feel progressive and constantly evolve throughout the album, giving the listener something different to pick up on with each listen through. The scales in which these melodies are constructed feel very medieval, leading you to believe that they are either in or played around modal scales, either way this adds such an interesting layer of complexity that they stand out significantly from the chugging rhythms and celestial pads. One Last Pint (At The Duck) however, is probably the most rowdy tavern song that has been heard for a long time. The jaunty rhythms will keep your foot tapping and the synth keyboard solo will have you incessantly smiling like a drunken goon because of its epic proportions. The "Drink!" chorus is sure to be a fan favourite in the years to come. The layers of synths create such a brilliant atmosphere it is easy to become incredibly absorbed in the album, whilst some of it has a bit of the usual metal cheese, it is an exciting and enthralling listening experience. Album closer A Warship Braved The Tempest is a triumphant end to and immensely expansive album, consolidating it all into one turbulent song. Overall, the album definitely makes you want to go out and adventure to your hearts content, roaming far and wide across many lands. The compositional strength makes the album flow effortlessly, with the bookending of the album between the acoustic melodies of A Valley Of Ashes and the outro section to A Warship Braved The Tempest.
The album's production is an improvement on 2016's Wrath Of An Empire, as everything sounds a lot cleaner and sharper. The rhythm guitar tones are thick and chunky, backed by the constant drilling of the kick, it helps lock the rhythms into your skull with devastating efficiency. The layering of the acoustic guitar in some areas also gives the album a wholesome earthiness in some areas and adds to the unique textures that the band has developed throughout the album. The drum sound as a whole is incredibly tight, and roots every song perfectly, allowing the layers of guitars and synths to express themselves without contending with the snare or cymbals. The bass fills the low frequencies with a rich present, helping reinforce the power in the rhythmic riff. The synths and other symphonic elements are laid out like a proper orchestra, with each instrument, choral vocal and synth element having it's own space, which helps build this epic image that the music portrays. The lead tones feel warm and weave their way through the mix, augmenting the synth melodies before exploding into life for the solos. Overall the album's mix is massive, really emphasising the mystical and fantastical nature of the music to help create an incredible sonic experience.
If you fancy questing for dragons and slaying goblins before washing it down in The Duck, go in search of A Throne Of Hollow Fire now!
Stormtide - A Throne Of Hollow Fire
Album Reviews