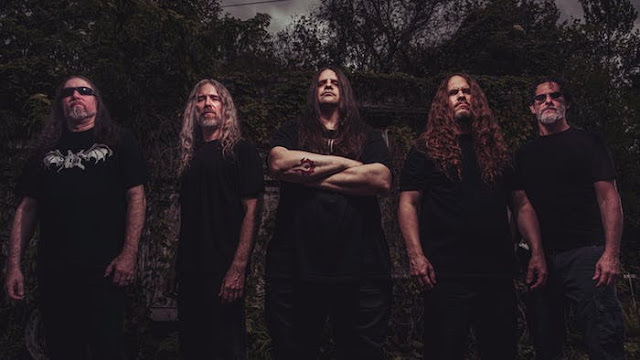 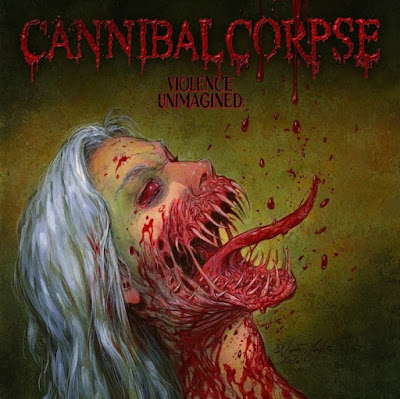 Review
Rating (out of 5🤘): 🤘🤘🤘🤘🤘
Favourite Track(s): Murderous Rampage, Inhumane Harvest, Condemnation Contagion, Ritual Annihilation, Slowly Sawn, Cerements Of The Flayed, Follow The Blood, Surround, Kill, Devour
Cannibal Corpse have unleashed their raging beast of a fifteenth album on the world and the album is probably one of their strongest to date (which is exactly what we said about Red Before Black, Torture, Evisceration Plague, Vile, Kill, etc.) this band never disappoint! The growing anticipation around this album as to what effect Hate Eternal's Erik Rutan has had on the band, and it is fair to say a new lineup has injected even more venom into the veins of the band. Replacing Pat O'Brien was always going to be a difficult one as he is no slouch on guitar, but getting Erik involved has definitely freshened the place up as well as being a natural fit. With the songwriting responsibilities being taken up by a variety of members, this new mingling of ideas has spewed forth an intoxicatingly brilliant death metal album. To be at the absolute top of your game, 15 albums in 30 years down the line despite being dogged by controversy and censorship is a remarkable feat and for it to still sound exhilarating is simply remarkable.
Obviously the album has all the signature Cannibal tropes that will make it instantly recognisable, but you can't help but feel pure joy from listening to it. Whilst the brutal death metal genre itself may evolve and change, Corpse will always stick to their guns and give you exactly what you expect and more. Dining out on the horror and gore in their lyrics, the band cast a relentlessly aggressive and intimidating presence with these eleven grizzly tales of torture and mutilation. The band have always had a mastery of balance, nothing is ever OTT everything has it's purpose and while its lyrically brutal, there is a sense of less is more. This approach still gives Corpse the edge over everyone else because they can still manifest horrid imagery in sharp, stabbing one line lyrics. The riffs are skull crushing, heavy and frantic yet technically precise. It is impossible to truly comprehend how this band consistently write albums that top the one before, and Corpsegrinder's vocals still sound as powerful and clear as they did way back in 1995 when he joined the band. Even with that in mind there is still a significant amount of variety, lead runs that catch your attention and rhythms that you can't help but untie your hair and windmill your neck to death to. Violence Unimagined is an unrelenting and violent album that is grim, dank and grimey yet surprisingly slow tempo. There is a lot of space for the bass and the drum grooves to really embed themselves, which is a testament to Webster's and Mazurkiewicz's chemistry and songwriting. Switching between frantic death metal and sludgy technical chord based riffs is signature Cannibal but it's not predictable, which keeps you on the edge of your seat throughout. Surround, Kill, Devour has to be a stand out song, as it carries the same visceral maliciousness as Code Of The Slashers, capturing a harrowing post apocalyptic scene of which murder and cannibalism are king. The album runs like a well oiled machine, barely giving you time to rest before being battered again with a megalithic baseball bat blow to the head from another crushing riff. Condemnation Contagion feels like the most traditional Corpse song on the album packing hulking chugged grooves and the staccato leads riffs the band are known for. By comparison Slowly Sawn has a slow build with elements that sound slightly Meshuggah-esque. Overall, when you pick this album you will be met with the strong and consistent quality that the band have possessed for years. However the Rutan effect has definitely shone through in the songwriting, and it seems like the perfect way to start this new chapter of the band. Violence Unimagined has set a new standard for the band, it remains to their style but elevates it miles above their other work, a strong contender for album of the year and it is only April!
The production is raw and contradictorily highly polished, capturing the brutal nature of the music and the imposing live energy of the band simultaneously. In some areas that was a little lost on Violence Unimagined's predecessor Red Before Black. So it's adrenaline pumping to hear such a crushing mix. The rhythm guitar tones have a viscous growl to them in the more note driven riffs and in the chordal, chugged sections they feel as heavy as ten tonne weights. The leads cut like a sharp kitchen knife through your ears, really unleashing the power of the tasteful shredding solos. The signature bass rumble underneath the carnal chaos puts the meat on the bones sonically, making the mix thick but not muddy. The kick drives through like two hammers and the snare fires like a machine gun. There is an interesting use of flange on Corpsegrinder's vocals in Follow The Blood that stands out and adds some variation that you don't expect, making the vocals sound like blood spiralling down a plug hole. Overall the mix is classical Cannibal with some modern grit.
Once again Cannibal Corpse has fed the masses another dose of prime cut death metal. Violence Unimagined is easily their best work today, and the band are still very much at the top of their game. So if you fancy indulging in some grizzly death metal, this album is for you!
Cannibal Corpse - Violence Unimagined
Album Reviews