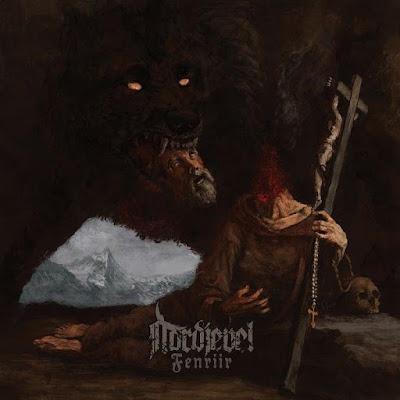 Review
Rating (Out of 5🤘): 🤘🤘🤘
Favourite Track(s): Fenriir, Gnawing The Bones, Rovdyr
Coming out of the frosty Norwegian landscape, rises a great wolf, the monstrous son of Loki. Norway's black metal heavyweights Nordjevel have evoked the spirit of the great beast Fenrir on their latest EP. Utilising their ruthless and brash brand of black metal alongside channelling this ancient Nordic beast, Nordjevel have composed an EP that gnashes at you with gleaming claws, staring at you with a furiously sinister intent. There is definitely an old school feel to this EP, as many EPs are stand alone releases these days, as it features two exclusive songs to this release, one song that is to be featured on their new album, a cover of a Possessed's Fallen Angel (from their iconic debut album Seven Churches) and one live track. In a way, this offers an overview as to where Nordjevel find themselves in 2021.
The EP offers up plenty of raw and savage riffs that sit somewhere between the theatrics of Dimmu Borgir and the cold, brooding frost of Darkthrone. Opening up with dark and oppressive scene setting in Fenriir, the album takes you slowly on a path to distraction as your eyes linger on conjured up images of the great wolf's devastation. The song itself has a distinctly bleak poetic feel to it, as the soaring guitar melodies compliment the theatrical delivery of the lyrics. It is an intensely atmospheric song, with its slow build giving rise to a triumphant chorus of chaos when everything else comes in. This is further emphasised by the chanted vocals that appear halfway through the song. In many ways it feels like a battle chant, as if we are avenging the loss of Týr's missing arm. Meanwhile, Gnawing The Bones is an all out Norwegian black metal song, keeping the spirit of the early 1990s alive. Ridiculously fast and relentlessly chaotic, it feels like your bones are being snapped the sinews feasted on. The riffs summon all kinds of evil with their sinister discordance, with Dead style vocals in various parts of the song. The third and final new song on the release, Rovdyr, effortlessly utilises the melodic devices and rhythmic grooves as found in Fenriir but with a somewhat dialled back black metal edge, opting in favour for a more clinical and technical approach. It's easy to see why these songs might not fit on an upcoming Nordjevel album, however Gnawing The Bones and the Fallen Angel cover are a bloody good sign of what is hopefully to come. The Possessed cover is a good indicator as to where the band have been influenced and they bring the song into the modern sphere. Overall, the EP is quick, relentless and ruthless, packing a significant amount in such a short space of time. Nordjevel have always been a consistently good black metal band and have valiantly kept the spirit of the second wave of black metal alive in this new third wave, keeping Norway firmly in the picture of global black metal and Fenriir demonstrates this.
The production is fairly stereotypical of this third wave of black metal, not overly polished but not crushingly raw like its predecessors. Nothing stands out from anything else and it is all equally balanced in that sense. The guitar tones have a more overdriven sound than a distorted one, as the rhythm tones have a well rounded warmth. The lead tones have a bit more bite, a sharper more clear tone allows the lead melodies to be shown off considerably. The bass adds a decent amount of chunk to proceedings, giving the rhythm guitar tones a bit more oomph, whilst the rest of the low end space is fill with the kick. The drum mix overall sounds incredibly tight and closed in, helping to keep the momentum of the songs going by driving through them like a truck. Vocally, the layering and dryness of the vocals lends to a more aggressive black metal style which suits the music perfectly. This also makes the lyrics more intelligible, which is become a welcome upwards trend in a way. Overall the mix is pretty good but pretty standard in it's execution.
If you fancy blasting away a quick half hour with some blistering black metal, then Nordjevel's Fenriir is just the EP for you!
Nordjevel - Fenriir
EP Reviews