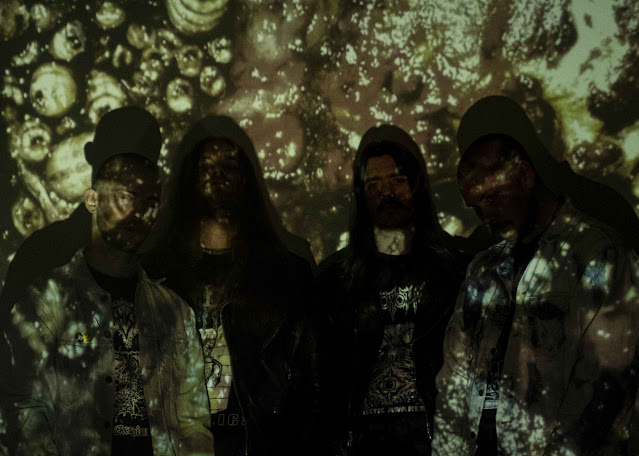 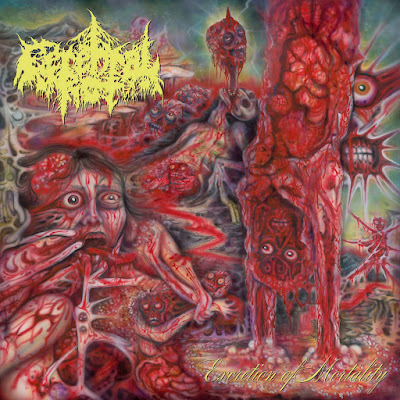 Review
Rating (out of 5🤘): 🤘🤘🤘🤘
Favourite Track(s): Vile Yolk Of Contagion, Spewing Purulence, Retching Innards, Crowning The Disgustulent (Breed of Repugnance)
Death metal is having a resurgence as of late. The last few years has brought us some of the most brutal, disgusting, vile and vicious sounding albums for a long time. Whilst the kings of the genre Cannibal Corpse are still tearing it up 30 years later, the underground is spewing up plenty of contenders to take their place. One of the bands at the forefront of this new death metal resurgence is Cerebral Rot, blending a bludgeoning mix of traditional death metal speed with bowel moving doom riffs, the band woke up and chose violence so to speak. Excretion Of Mortality is the follow up to the band's highly praised debut album 2019s Odious Descent Into Decay, and it doubles down on the grim and skull pounding doom elements yet sounds more raw and violent.
If you were to describe Excretion Of Mortality as a whole, it sounds like it has been fermented in toxic waste of an unspeakable nature, left to brew in the heat of the apocalyptically hot sun, this its fetid juices can be distilled and concentrated to bring you the most vulgar, sludgy death metal possible. Whilst it isn't packing the same volume of violence as their contemporaries, these slow, hulking death/doom riffs are still a significantly bludgeoning force to your ear drums. One thing that stands out about the album is that, for a death metal record, it has incredibly ominous and sinister atmosphere. Wether that is due to the band taking a more doom led stance in the writing process or the production, Excretion Of Mortality feels intense from start to finish. Like the slow decomposition process of the human body, it has this abominable, putrid quality to it. The riffs are dingy and grimy, weighing heavily and whilst it does bare some similarities to their excellent debut Odious Descent Into Decay, this album is ultimately tighter sounding. The band's songwriting leaves enough space for the foul stench to waft up from the sewers with a "space between the notes" approach to songwriting. The album has short bursts of cataclysmic, full speed death metal sections but ultimately it gives way to the trudging, knuckle dragging pace of doom. Whilst most songs tend to possess a similar structure, as trying to expand too much with in this genre's realms would change the whole make up of the band's sound, there is a form of genius in keeping it relatively simplistic. Each song seems to seamlessly blend into the next one, making the album a continuous battering of riffs, frantic splashes of brutal death metal and crazy flange solos. Vile Yolk Of Contagion is the best example that demonstrates all of these qualities, with the added bonus of brief harmonies. Spewing Purulence is probably the most brutal song on the album, utilising bass loaded intervals and erratic tempo changes. Drowned In Malodor is stacked full of groove and crazy drum fills that will no doubt get your head moving. Closing of the album is the eleven minute brain bashing that is Crowning the Disgustulent (Breed of Repugnance), the song consolidates all that has gone before it, adds a healthy dose of ominous atmosphere to it's introduction and then promptly rips you apart for the remaining nine minutes with no remorse. Overall, the album is thick, heavy and oppressive, a work of distinct sewage monster brutality that will leave you lying on the floor, skull split in half.
The album's production is positively lo-fi in comparison to their previous outing. Doubling down on a fuzzy, distortion drenched, ravaging, wall of guttural noise. It feels like, this time around, that the band have purposefully muddied the mix to give the album an even more putrid and disgusting sound, which is something refreshing in itself. Carrying this old school death metal vibe throughout the album, the guitars are loaded with audible fizzing and fuzzing distortion underpinned by a dense, rumbling bass that would shake the foundations of your central nervous system. The vocals sound like they were mixed in an abandoned sewage system, distant, cavernous and guttural. The drums are spread across a wide area to deliver maximum devastation, the kick is thick, heavy and pounding throughout the album. the snare's straight snap will give you whiplash, as the toms echo into a never ending void. Overall, the mix is exactly what it needed to be, raw, harsh and aggressive to really accentuate the pure vulgarity of the songs themselves.
If you fancy some utterly disgusting, riff heavy, doom bringing death metal, get listening to Excretion Of Mortality now, and see why Cerebral Rot are a band on the rise.
Cerebral Rot - Excretion Of Mortality
Album Reviews